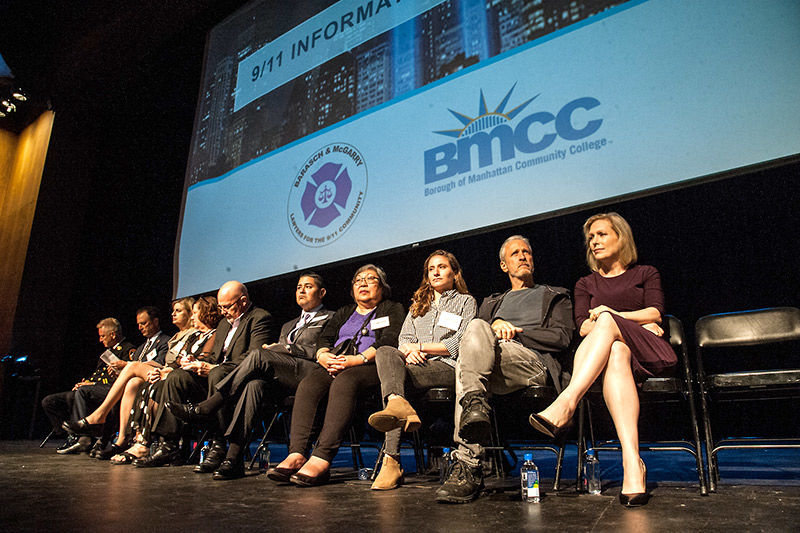 GETTING ALL HANDS ON DECK: A Borough of Manhattan Community College forum aimed at publicizing efforts to inform 19,000 students and 2,500 staff members who were at schools in the World Trade Center zone on 9/11 and during the months of clean-up that followed the terrorist attacks that if they contracted diseases because of exposure to the toxins in the air, they are eligible for free treatment under the World Trade Center Health Program attracted an all-star lineup. From right, those in attendance included U.S. Sen. Kirsten Gillibrand, comedian and 9/11-survivor activist Jon Stewart, former student Lila Nordstrom, BOMCC Accounting Professor Yvonne Phang, Schools Chancellor Richard Carranza and UFT President Michael Mulgrew.

The Department of Education and the United Federation of Teachers are collaborating to locate thousands of former city schoolchildren, now young adults, as well as 2,500 staff members, who were exposed to World Trade Center toxins on Sept. 11 and during months of clean-up afterwards.

Under the World Trade Center Health program, the students and DOE staff at schools in lower Manhattan and portions of western Brooklyn qualify for free health care and regular screening if they have a certifiable WTC-related health condition.

For several months, the UFT had been lobbying the City Council in an effort to legally compel the de Blasio administration to do an outreach.

“So, I am here this evening to announce that with our partners in the United Federation of Teachers we are launching an advocacy campaign in an effort to reach every single one of those 19,000 [students],” Schools Chancellor Richard Carranza said during a Sept. 16 WTC health forum at the Borough of Manhattan Community College.

The forum was sponsored by BMCC and the Barasch & McGarry law firm, which specializes in 9/11 WTC claims.

The DOE will mail out advisories with materials on the World Trade Center Health Program and the 9/11 Victims Compensation Fund. The campaign will use social media targeted to reach DOE alumni “that live in all four corners of the country and the world,” Mr. Carranza pledged. “We are committed to not stopping until we reach every person and every single one of them signs up.”

A similar effort will be made to inform the 2,500 DOE staff members who worked in the 29 schools located in the WTC toxic zone of the coverage to which they are entitled.

“One week after 9/11, there were schools in the zone that were open, and we are talking about children in first grade coming back to school with a nice new backpack because we were told by the EPA that everything was fine,” Mr. Mulgrew said, referring to the U.S Environmental Protection Agency.

The UFT president said when he has asked former students from the cohort about signing up for the WTC Health Program, they say they feel fine.

While the WTC Health Program for first-responders has managed to enroll over 80 percent of the 91,000 people who worked at Ground Zero, just 21,000 out of the 400,000 who are known as survivors have enrolled.

The awareness campaign to raise the visibility of the survivor health program is taking on a sense of urgency as the toll from WTC contamination deaths approaches the almost-3,000 victims who perished in the Sept. 11 attacks.

According to the WTC Health Program website, there are 13,298 people with WTC-linked cancers: 9,405 of them are first-responders, like cops and firefighters while 3,893 are categorized as survivors.

At a June hearing of the House Judiciary Committee, the panel was told that there could be as many as 20,000 additional World Trade Center cancer cases that could take longer to develop.

Ellie Engler, a senior adviser to Mr. Mulgrew, was the union’s industrial hygienist who worked with the DOE and the School Construction Authority to conduct the post-9/11 environmental review of a dozen schools near the WTC site.

“And the schools got reoccupied,” she told the capacity audience. “And no matter how clean a school might have been at the moment and time we did an air test, once you open the door, there was the tracking of dust coming in and everything changed.”

She continued, “Twelve years ago I developed breast cancer. I had major surgery. I had chemotherapy. I developed severe asthma and life continued on…It wasn’t until two years ago that I was sitting with some friends and they said ‘Gee, did you ever think your cancer might be related to that work that you did?’”

Ms. Engler sought out the WTC Health Program and was certified as a first-responder and receives free medical care and prescription drugs.

“Many of us returned back to schools that had not been adequately cleaned,” said Lila Nordstom, who on 9/11 was a senior at Stuyvesant High School, a few blocks north of the WTC complex. “Many of us returned before the fires were out. The environment outside was being continually re-contaminated by the trucks that were carrying the debris.”

Ms. Nordstrom started StuyHealth, a non-profit advocacy group aimed at reaching other WTC students. She is a WTC Health Program participant and gets free treatment for her asthma through the program, even though she now lives in California.

WTC-linked cancers and a myriad of other linked ailments have been documented in the former K-12 public-school cohort that attended the affected schools.

“There are a lot of health effects that are still with us and others that may manifest themselves later,” warned Dr. Jacqueline Moline, the director of the Northwell Health Queens World Trade Center Health Program.

She told the audience members that if they were in the survivor group and had contracted any of the dozens of WTC cancers or other conditions like asthma, they were eligible for the WTC Health Program because there was a legal presumption that it was their exposure to the toxic dust that caused their condition.

“Dust doesn’t know if you are a worker, whether you are a building re-occupant, community resident,” she said. “You can’t differentiate when you’re breathing what your [job] title is. Your lungs are breathing it in all the same way.”

The DOE and UFT are planning a joint information event on Oct. 28.