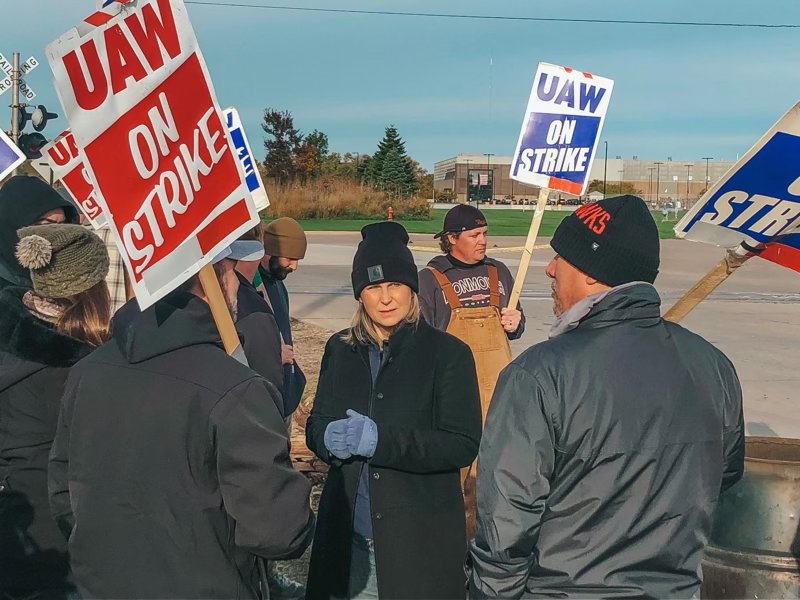 AFL-CIO President Liz Shuler, pictured on a picket line with striking John Deere workers in November, earlier this month cited her own experience in the International Brotherhood of Electrical Workers to note the collaboration between that union and employers 'who invest in a pipeline of talent...because they know they want the highest-quality, most highly-skilled, trained workforce that you can find.'
Courtesy Liz Shuler
Posted Wednesday, March 16, 2022 3:34 pm
By RICHARD STEIER
rsteier@thechiefleader.org

Amplifying her contention soon after taking office last August that policing as a profession was "broken," AFL-CIO President Liz Shuler said in a podcast that aired March 9 that if cops who were union members weren't "standing up for the values that we hold dear, then we need to be holding our members accountable."

Appearing on a Freakonomics Radio podcast titled, "Are Labor Unions Really the Right Fix for a 'Broken Economy'?" Mr. Shuler under tough questioning by host Stephen J. Dubner noted that there were 13 law-enforcement unions under the AFL-CIO banner but "18,000 different police jurisdictions in this country, and they all have a patchwork quilt of approaches."

But, she added, "the one thing that we believe is constant is the ability for working people to have the training, the high-quality and high-caliber approach for their work."

Speaking of a mechanism she called Union Law Enforcement Accountability and Duty Standards, she said, "It's this notion that if you see a fellow law-enforcement person on a scene that is not acting according to our values, that you are holding that person accountable and breaking down that blue wall of silence, because I think the inclination is to defend each other at all costs. But in reality, you know, speaking out saves lives."

Mr. Dubner later in the podcast shifted the focus to the United Auto Workers, where in November a local official in Detroit was charged with stealing "a couple million dollars in union money," which he said made him the 16th official of the union to face corruption charges in an ongoing probe. He asked Ms. Shuler, "What do you say to someone who reads that headline and says, 'Unions, you know, I don't think they are the solution'?"

She replied, "I would say that unfortunately, we have bad actors in every industry, in every organization. But it's unacceptable, and it's up to us as working people to hold our leaders accountable," noting that the UAW's leadership "has put in all kinds of new controls to restore the trust and confidence of the members."

When he asked her whether she wasn't diplomatically deflecting attention from corruption that "tars the reputation of the other unions in your federation," Ms. Shuler responded, "Don't mistake my diplomacy for covering up my outrage. No, I am disgusted. And unfortunately, when a scandal like that happens, it takes people's attention away from the fact that the labor movement fights for all working people, not just our members."

When Mr. Dubner asked whether she had considered banishing the UAW from the AFL-CIO, she said that there had been internal debate on the subject, but "then the government stepped in, so we left it to the government to do the oversight."

Asked about her opposition to the Green New Deal—a carryover of the position her predecessor and mentor, Richard Trumka, had taken prior to his death last summer—Ms. Shuler said that in its original conception, the program "wasn't about creating good union jobs as much as it was about finding ways to reduce carbon emissions and do it through the electricity sector...the emphasis has to be not just on electricity emissions, it has to be on transportation emissions, it has to be in how we manufacture. But also do it in a way that's responsible, that helps working people make that transition and make sure that the jobs we're creating, that replace the jobs we're eliminating, are good union jobs."

When Mr. Dubner asked whether that wasn't a rationale for protecting members' jobs in "old-guard sectors" of the economy, she countered, "Renewable-energy jobs are right now low-wage jobs with no benefits. And so if you're eliminating a job for a power-plant operator who's making $40 an hour and has good health-care benefits and a retirement [benefit], if that job's going away and you're displacing that person, then we need to make sure we have a pathway to a good, sustainable job in a new opportunity that isn't going to be installing solar panels, because they're working out of the back of a pick-up truck and have no security."

The podcast host said that his experience working at The New York Times decades earlier had left him disillusioned because "it felt and looked like the union's primary goals were to overpay employees who'd been there a long time and often didn't do a lot of work. It decreased job mobility both internally and externally. It protected employees who messed up. It made it very hard to discipline or fire them."

In response, Ms. Shuler, who is running for a full term as AFL-CIO president in June and could face opposition from Association of Flight Attendants President Sara Nelson, told him that "one thing I would say is, without getting involved in the union, you can't change it, right? And so there probably are some cases where you'd have leadership or membership that has been around for a while and doesn't listen to the younger people—like we know, youth is not appreciated like it should be. But that's up to us to change that."