Rikers COs arrested, accused of faking illnesses, injuries to stay off the job 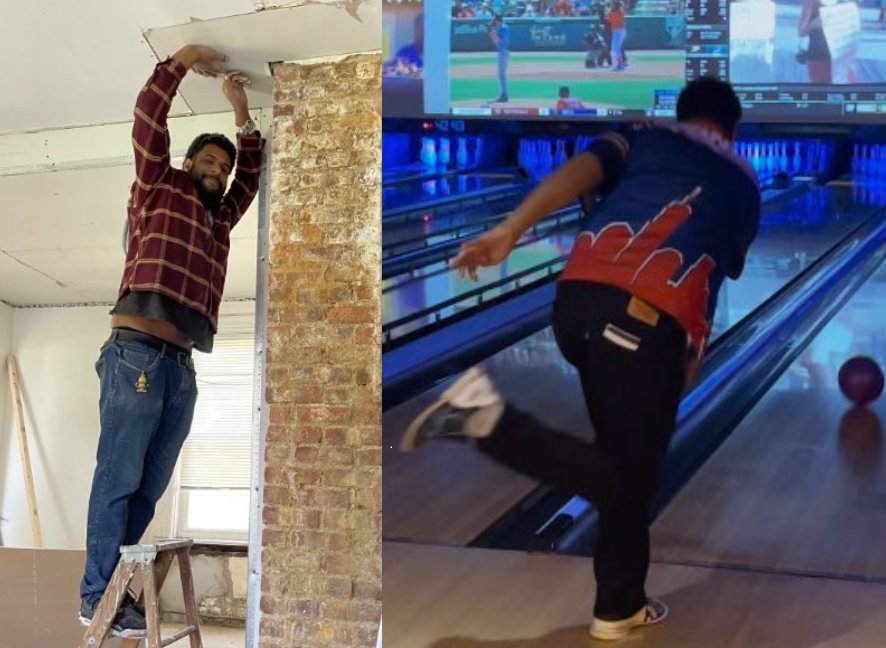 Eduardo Trinidad, a Department of Correction officer since 2013, installed drywall, went bowling and engaged in other physical activity during a 16-month period he claimed to be unable to work because of debilitating injuries resulting from a fall, according to a federal complaint charging him with fraud.
Courtesy of the U.S. Attorney's Office, Eastern District of New York
Posted Tuesday, November 15, 2022 3:45 pm
BY RICHARD KHAVKINE

A Rikers correction officer partied in the Dominican Republic and Florida, collecting her full salary during the 14 months she feigned illness and injuries to stay off the job.

Her fiancé, claiming debilitating injuries from a fall, joined her on the Department of Correction’s sick rolls, and also on the dance floor, a few months later. He logged $140,000 in city pay while nursing a counterfeit affliction over 16 months.

A third CO, alleging vertigo and other side effects from a Covid jab, parlayed the DOC’s  unlimited sick-leave policy into more than 18 months he used to pursue a career as a cartoon artist, all the while drawing $160,000 in salary.

Those allegations and others were detailed in federal criminal complaints unsealed Thursday by the U.S. Attorney’s Office for the Eastern District of New York following the arrests of Monica Coaxum, 36; her fiancé, Eduardo Trinidad, 42; and Steven Cange, 49.

All three face federal fraud charges for faking illnesses and injuries, forging dozens of doctors’ notes and collecting their salaries, even as the penal compound plummeted into chaos, in large part because significant numbers of officers were unable to work or, some have alleged, were unwilling.

“As charged, these New York City Correction Officers feigned illness and submitted false medical documentation to take sick leave during a staffing crisis, defrauding the City of New York of hundreds of thousands of dollars,” the city Department of Investigation’s commissioner, Jocelyn Strauber, said in a statement following the arrests.

The DOC’s commissioner, Louis Molina, called the three COs’ conduct “unacceptable” and a breach of their responsibilities to the city and the department.

“These correction officers in no way are a reflection of the hard-working women and men who represent New York’s Boldest,” he said in a statement. “Since day one, I reaffirmed my commitment to hold all staff accountable, especially officers who selfishly abused a privilege and didn’t report to work when their colleagues needed them the most.”

Since late 2021, the FBI and the DOI have been investigating DOC officers suspected of lying about illnesses and injuries while still collecting their paychecks. Agents conducted surveillance, spoke with possible witnesses, including medical providers, and sifted through medical, financial, personnel and cellphone records.

At one point during her roughly 14-month absence, video and photographs obtained by investigators show Coaxum and Trinidad dancing at a party. About a month later, in January 2022, during a WhatsApp video conversation with family members, a relative told Coaxum, “Monica, you living your best life but scamming your job.”

The six-year CO replied: “Yes, at home still getting paid, unlimited sick baby. Get like me!

She pulled in more than $80,000 during her absence from her post, which lasted from March 2021 to May 2022, during the height of staffing crises at the jail, according to the federal complaint.

Trinidad, a CO since 2013, claimed to have injured himself in a May 2021 fall at home. He told DOC officials that he could not work due to resulting “trauma.” He took sick leave from June 2021 until he returned to work early this month.

Although he would show up to evaluations with the DOC’s Health Management Division using a cane or wearing a sling or medical boot, pictures and videos stored on Coaxum’s iCloud show him, in one instance, installing drywall on a ceiling while standing on a step ladder. Five days later, he reported to HMD wearing a sling and a medical boot and using a cane.

On another occasion, he is pictured bowling six days after a visit with HMD during which he wore a sling and a medical boot.

Cange, a CO since 2014, submitted more than 100 fraudulent medical notes to the DOC claiming that he was receiving treatment for vertigo and other side effects attributable to a Covid jab and other supposed infirmities, authorities said. He collected more than $160,000 in city salary during an ersatz sick leave that began in March 2021 and lasted until his arrest. During that time, Cange, who authorities said submitted nearly 50 fraudulent notes during his alleged sickout, worked on his cartoons, published and publicized a comic book and met with fans.

Subpoenaed records from medical providers he claimed were providing him treatment showed he was not at appointments. And medical records, including MRI results, subsequently subpoenaed by investigators “contradict” Cange’s claims to the DOC, the complaint says. And Cange, 49, “did not provide any medical records to DOC, outside of doctor’s notes which were based solely on his own self-reported symptoms,” the complaint noted.

Coaxum claimed to have fallen in an elevator, with the resulting trauma to her right side leaving her unable to work. While she was off the job, Coaxum submitted at least 55 fraudulent medical notes to the Department of Correction, claiming that she had been to a medical appointment when she was in fact elsewhere, the complaint notes.

Coaxum and Trinidad, who met in 2020 and planned to marry next year, had professional pictures taken showing each standing on legs each had claimed was injured, her left, his right, the complaint notes.

After she twice put off surgery on account of family issues and personal reasons, the DOC gave her an ultimatum in April, threatening to fire her if she did not come back to work. She returned a couple of weeks later.

The president of the Correction Officers’ Benevolent Association, Benny Boscio Jr., said the allegations contained in the federal complaints in no way reflect the professionalism and dedication of his members.

“These are obviously extremely serious allegations and if true, do not represent the 99% of our officers who are working excessive amounts of overtime without meals to keep our city safe every day,” he said in a statement. “COBA does not in any way encourage our members to call out sick without a valid reason and this type of behavior is a gross disservice to their fellow officers.”

DOC officers have unlimited sick leave, a policy that has come under some scrutiny since staffing shortages at Rikers compromised security and other functions at the island penal colony, where 18 inmates have died so far this year, the highest since 2013. Violence among inmates and against staff, and otherwise deplorable conditions inside the jail for a time led to discussions about a federal takeover of the jail.

Since the start of the pandemic, the DOC and Rikers have been beset by massive amounts of officer shortfalls attributable both to illnesses and injuries and to unauthorized absenteeism.

A report earlier this year by city Comptroller Brad Lander’s office found that the absentee rate among DOC officers attributable to illness or line of duty injuries rose to 27 percent at the start of the fiscal year, in July, “far surpassing” the 5- to 7-percent absence rates that were typical before the pandemic.

Just prior to the start of the investigations by the FBI and DOI, the de Blasio administration filed suit to compel COBA to prod officers abusing sick-leave or who were AWOL to return to duty. Union officials vehemently disavowed the suit’s assertions, calling the legal action a smokescreen intended to hide the city’s mismanagement of a staffing crisis.

Officer shortages led to a “state of emergency” declaration at about that time by-then Mayor Bill de Blasio. It provided that officers who did not show proof of illness within a day of calling out would be suspended 30 days without pay with AWOLs similarly punished. More than 50 officers were eventually terminated, according to the union.

In recent months, the number and proportion of uniformed staff on sick leave has declined significantly, to “its lowest point since the apex of the staffing crisis in September 2021,” with 12 percent out on sick leave as of September, according to an October status report by the federal monitor tapped to oversee reforms in city jails.

But the number of officers has also declined by 13 percent since September 2021, according to the monitor’s data.