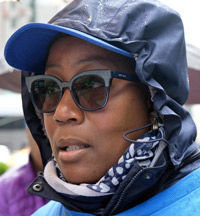 MIDDLE-CLASS STATUS THREATENED: Metro Vice President Tiffany Foster emphasized that the U.S. Postal Service is not subsidized by taxpayers and said the push to privatize amounted to ‘an attack on…the people like our members that have the ability to buy a home, buy a car, send their children to college’ only because of their jobs and the pay and benefits the union has obtained for them. 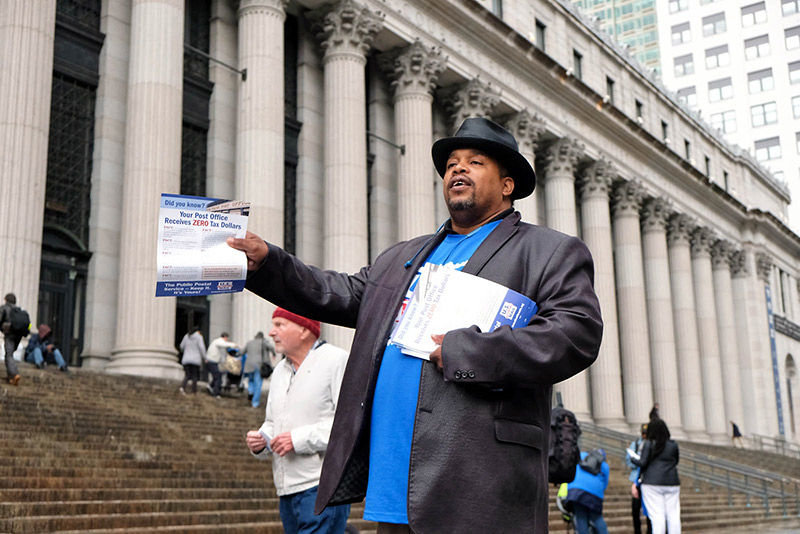 A SPECIAL DELIVERY: As members of the public flocked to the Farley Post Office to pay their taxes on the final day to file, Metro Area Postal Union President Jonathan Smith led his members in trying to convey a message that draws closer to being urgent: that the Trump Administration is seeking to reduce postal services to build a case ‘to privatize the post office so big business and their greed can get control.’

The Chief-Leader/Michel Friang
Previous Next
Posted Tuesday, April 23, 2019 11:00 am
By BOB HENNELLY

On tax-deadline day, members of the New York Metro Area Postal Union held an informational picket in front of the Farley Post Office in Manhattan spreading the word that the U.S. Postal Service was not supported by tax dollars and generated its own revenue.

Similar informational efforts were staged April 15 at more than 100 other postal locations coast to coast.

The union said the education campaign was critical to counter a drive by the Trump Administration to privatize the postal service while stripping it of the requirement to make daily mail deliveries six days a week to every home. The changes would also entail rolling back postal-worker pay and benefits.

At stake are 600,000 union jobs and the Postal Service's “universal service requirement” to deliver mail to 157 million U.S. addresses. In the Trump Administration’s policy papers on the issue are references to the need to avoid “shifting additional costs to taxpayers,” even though no taxpayer funds are used to cover USPS operations.

“We are trying to educate not just New Yorkers but the entire country that the Postal Service does not collect any tax dollars whatsoever,” Jonathan Smith, president of the Metro, said in an interview. “We know that there are certain forces that want to make that case to make it more palatable to privatize the Post Office so big business and their greed can get control.”

For decades, under both Democratic and Republican administrations, the postal unions have had to fend off attempts to privatize postal operations. But union officials say that with the election of Donald Trump, groups that were once on the conservative fringe have an unprecedented influence over White House policy, including possible privatization.

“The right-wing think tanks like the Heritage Foundation have never had this kind of unfettered access to the President,” said Chuck Zlatkin, the Metro’s press spokesman. “But keep in mind, even the so-called moderate Democratic Party think tanks have supported privatization.”

“A private postal operator that delivers mail fewer days per week and to more central locations (not door delivery) would operate at substantially lower costs,” according to a Trump Administration white paper, “Delivering Government Solutions in the 21st Century." “A private entity would also have greater ability to adjust product pricing in response to changes in demand or operating costs…. Freeing USPS to more fully negotiate pay and benefits rather than prescribing participation in costly Federal personnel benefit programs and allowing it to follow private practices in compensation and labor relations, could further reduce costs.”

That white paper last June was followed up in December by a 70-page report issued by a task force headed by U.S. Treasury Secretary Steven Mnuchin that called for “exploring licensing access to the mailbox” and “converting post offices into contract post offices or by co-locating with or renting space to complementary retail establishments.”

Under the heading “Creation of a New Business Model,” the Mnuchin report calls for an operation that recognizes “that private products and competitive markets increasingly meet the country’s communications and commerce needs.”

Mr. Zlatkin countered the current marketplace was defined by a deep digital divide that had poor and rural communities getting short shrift, with the U.S. Postal Service the only universal affordable conduit for all Americans.

“Look at the Internet, where people have to pay to get their service, and even with paying, there are areas in this country people are still having to use dialing up---never mind getting access to broadband,” he said.

He continued, “This is all part of the Trump Administration’s Office of Management and Budget two-step program where they get the post office ready to sell and attractive to potential buyers by ending the post office’s responsibility for universal delivery and  eliminating collective bargaining for postal workers.”

“A lot of people really believe the government subsidizes the Postal Service,” Tiffany Foster, executive vice-president of the Metro, said in an interview. “This [privatization] is an attack on the everyday Joe.....the people like our members that have the ability to buy a home, buy a car, send their children to college. Without the postal service and the union, we did not have these opportunities.”

By contrast, thanks to the explosion in cyber-shopping, USPS package volume went from 3.1 billion in 2010 to 6.2 billion in 2018, with revenue from that traffic going from $10.3 billion to $21.5 billion over that eight-year period.

For years now, the American Postal Workers Union has advocated for the Postal Service to return to offering banking services as a way to help balance the books. From 1911 until 1967, the USPS provided basic financial services for postal patrons. At its peak popularity in 1947, it held $3.4 billion from more than 4 million depositors.

"By some estimates as many as 100 million people have no access to commercial banking," Mark Dimondstein, president of the APWU, told CBS in 2015. "Right now these households can lose up to 10 percent of their income to payday loans and other forms of predatory lending."

In the last few years, more than 200 postal facilities nationwide have been closed as the independent agency downsized while meeting a Congressional mandate to set aside more than $5 billion annually to cover projected health-care costs for the postal system's retirees.

A 2014 report from the USPS Inspector General estimated postal banking could bring in $9 billion in additional revenue annually. "The average under-served household spends $2,412 each year just on interest and fees for alternative financial services," according to the IG's white paper, “Providing Non-Bank Financial Service for the Under-Served.”

Mr. Dimondstein said the USPS's re-entry into financial services would fill a "tremendous social need" for nonprofit banking while "strengthening the U.S. Postal Service  by bringing in more business."

Ultimately, the fate of the U.S. Postal Service is in the hands of Congress, and union officials say there is some reason for optimism, particularly after the 2018 mid-term elections which saw Democrats pick up 41 seats.

A top priority for the APWU is to see the development of postal-banking pilot projects in places like The Bronx, which has traditionally been under-served by commercial banking.

In July, Rep. Patrick McHenry, a Republican from North Carolina, introduced a bill that would have stymied the push for postal banking by making it illegal. "That was voted down, and we also had 28 Republicans with us on that including the conservative Rep. Mark Meadows," said Mr. Zlatkin, referring to the head of the GOP's Freedom Caucus.