First Paycheck Missing for 300 CUNY Adjuncts Due to Technical Glitch 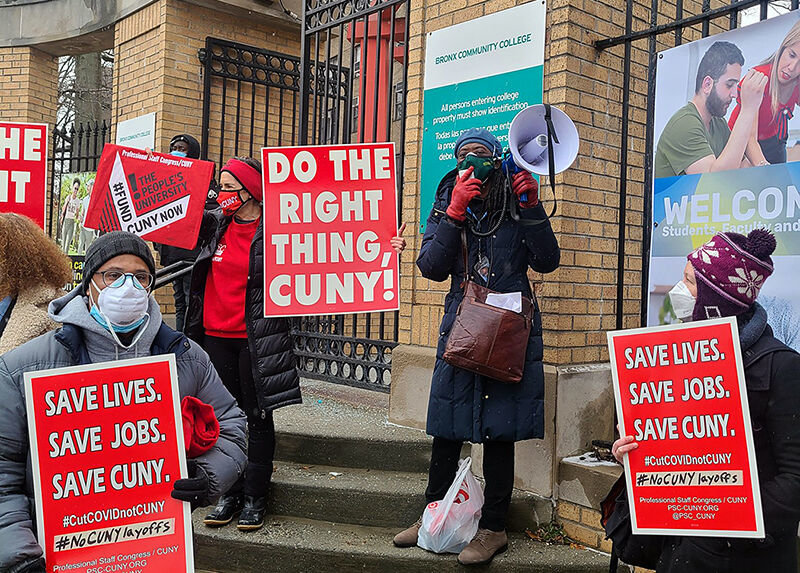 PAY GAP: The Professional Staff Congress urged the City University of New York to address its inadequate payroll system after a technical issue resulted in delayed paychecks for 317 employees at CUNY. Pamela Stemberg, PSC chapter chair at City College, asserted that affected employees who requested advanced payments were being denied.

More than 300 adjuncts at the City University of New York did not receive their first paycheck for the spring semester due to a technical problem, according to a union representative and CUNY.

Days before they were expecting to receive that paycheck, 317 employees across the system's senior colleges were told that they would not be getting it on Feb. 10 but would receive it on Feb. 24, said Pamela Stemberg, the Acting Chapter Chair of the Professional Staff Congress at City College.

'Can Request an Advance'

Most of the staffers were adjuncts, or part-time teaching staff, although some were full-time employees, according to Ms. Stemberg.

A CUNY spokesperson said the delay was caused by a “technical issue with our payroll partner.”

“Affected employees were advised that they could request an advance payment from their campuses,” the spokesperson said. “CUNY values the contribution and dedication of our nearly-12,000 adjunct faculty, and all that they do for students.”

Staffers were entitled to a partial advance of 60 percent. The PSC also called on CUNY to provide a letter of explanation that employees could give to their landlords or other creditors.

But several of the colleges have refused to administer advance payments to the affected adjuncts, Ms. Stemberg stated.

“That’s what really irks me. They don’t care,” she said. “This is their first paycheck in eight weeks. People are scrambling to stop auto-deductions. It’s insulting.”

In a message to members, PSC President James Davis noted that delayed paychecks were not an unusual occurrence at CUNY. He called the delays “deeply disrespectful to adjunct instructors, and they are avoidable.”

"The PSC will press CUNY management to address the real source of the problem: a payroll system that is not equipped to handle the volume of contingent appointments on which CUNY relies," he wrote.

CUNY’s failure to advance payments as a remedy to the situation only added to Ms. Stemberg’s perception that adjuncts were treated as disposable. She also was worried that adjuncts would not be given preference as the system begins to choose candidates for hundreds of new full-time jobs.

As part of the state’s budget proposal, $53 million will be used to support CUNY’s plans to convert 540 part-time Lecturer positions into full-time jobs. During a November City Council hearing, interim Executive Vice Chancellor and University Provost Daniel Lemons noted that the Lecturer positions would be a “great career pathway for many of our existing adjuncts.”

The PSC applauded the conversions, particularly since adjuncts are low-paid and many have worked at CUNY for years. About 60 percent of classes within the university are taught by adjuncts.

Ms. Stemberg was concerned that if the public-university system conducted national searches to fill these openings, few of the positions would actually go to adjuncts.

“You’re going to have thousands of people applying for these jobs,” she said.

The Adjunct Assistant Professor was concerned that among the 540 openings, her campus, City College, was set to only receive eight of the full-time positions although it was down 50 faculty members. She also feared the openings would prioritize those who teach first- and second-year classes, which tend to be the largest.

A CUNY spokesperson did not clarify whether adjuncts would receive priority for these positions, but stated that faculty searches “will be open to all, including to CUNY’s current adjunct faculty, creating a potential career pathway for our dedicated part-time faculty.”