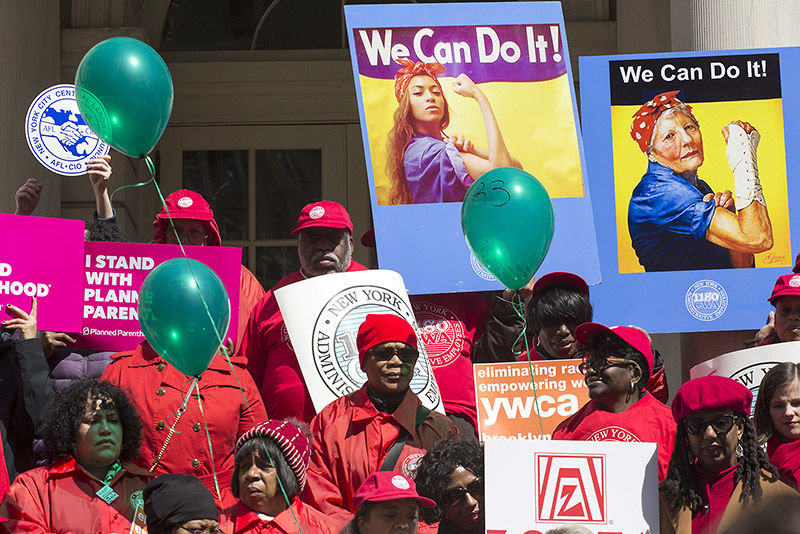 FINALLY ADDRESSING LINGERING BIAS: Veteran union members revel in their victory against city pay policies over a 40-year period that reduced salaries for Administrative Manager jobs at the same time that those holding them increasingly were women and black or Latino. The settlement provides for $5.5 million each for back pay and annuity payments and $4 million for future retroactive payments and raises. 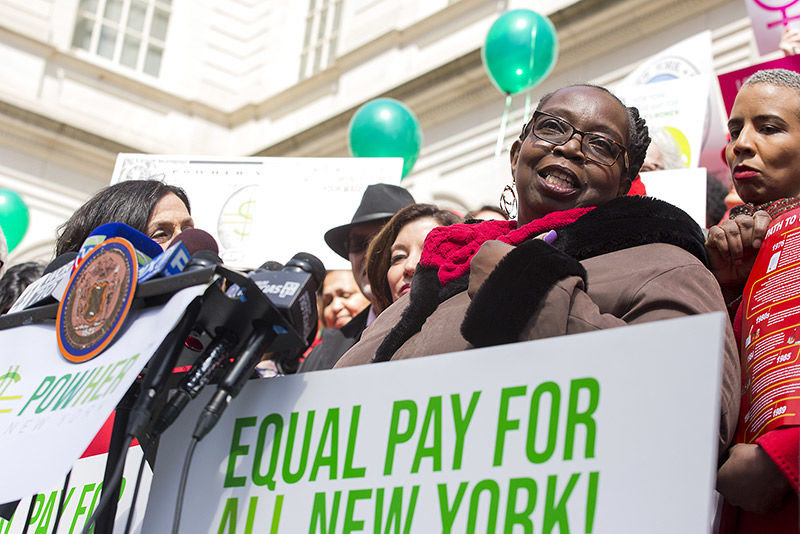 ‘THIS IS HISTORICAL’: Gloria Middleton, the president of Communications Workers of America Local 1180, said of the settlement of the union’s suit claiming gender and race bias in the setting of salaries for the Administrative Manager title, ‘It’s been a long path, a complicated path, a frustrating path. But today we can finally say it’s been a successful path.’

The de Blasio Administration and Communication Workers of America Local 1180 have reached a settlement to resolve a gender and racial pay-discrimination lawsuit covering Administrative Managers that was brought in 2013 against the Bloomberg administration.

The settlement is a major achievement for Local 1180, which Administrative Managers fought to join in 1976 in a bid to win collective-bargaining rights during the fiscal crisis as the city was consolidating civil-service titles.

“Local 1180’s path to the finish line started more than two decades ago,” union President Gloria Middleton told a cheering crowd of a few hundred members and their supporters on the steps of City Hall April 2. “It’s been a long path, a complicated path, a frustrating path. But today we can finally say it’s been a successful path.”

The union’s breakthrough came in April 2015 when the U.S. Equal Employment Opportunity Commission found reasonable cause to believe that for decades the city had engaged in widespread discrimination against women and people of color who held the Administrative Manager title.

The finding covered every city agency as well as the ranks of the New York City Housing Authority. The EEOC found that there had been  “structural and historic problems” in how the city treated the female and minority workers with the Administrative Manager title that resulted in their being paid  “much less than their white male counterparts.’”

As part of the local’s successful brief, it documented that in 1978,  when the Administrative Manager title was mostly held by white males, the job paid the equivalent of $92,000 a year, but in the years that followed, when an increasing number of women held the title, the salary dropped to $53,000. The EEOC estimated the disparity cost the women close to $250 million collectively over their careers.

“Right now there has to be preliminary approval by the magistrate,” Ms. Middleton said during an interview at City Hall. “Then the next step is our fairness hearing…Then there is final approval” [and] the  “city is obligated to pay out 90 days after.”

Under the terms of the settlement, $5.5 million will be set aside for back pay along with $5.5 million in annuity payments and an additional $4 million earmarked for retroactive payments and raises going forward.

Ms. Middleton said that she was most excited about the deal’s requirement that for the next five years the covered Administrative Managers will have their compensation re-visited annually by management, with the expectation that the existing pay disparity will be reduced.

‘Will Make a Difference’

“This is historical,” she said. “This we have not done before. The city has agreed to do this and it will make a difference in people’s lives to know that for a period of five years it is some sort of increase for you to get to a certain level.”

She continued, “Court cases set precedent, so it is important that we are fighting for our members but we are thinking about every woman that has a job in the city, whether they are in the private sector or public service, uplifting themselves and making sure they get fair pay.”

The Kurland Group represented Local 1180 in the lawsuit.

Rose Reeves is an Administrative Manager for the Department of Housing Preservation and Development with 36 years on the job. After the City Hall rally, she was philosophical about the settlement, calculating that over her career she had lost hundreds of thousands of dollars in potential earnings.

“I want to retire in three to four years,” she said. “So, before I retire we will hopefully see a change.” She said she was consoled by the knowledge that because of the union’s legal battle, “we are paying it forward” for all the women who come after the 1,600 covered.

In 2017, as the mayoral race was taking shape, the de Blasio administration and Local 1180 announced an agreement in principle, but behind the scenes negotiations continued, with a deal proving elusive amid what union sources said was “institutional resistance” from career city officials.

According to the statistics supplied by the rally organizers, white women earn 81 cents on the dollar for every dollar that’s earned by white men, with African-American women taking home 65 cents, and Hispanic women just 56 cents.

The rally was also a time for supporters to revel in the significant political progress recently made by women in Albany and at City Hall.

“What a difference a year makes,” Ms. Cumbo told a cheering crowd. “When I look around at all of the dynamic changes with our then-Public Advocate become the New York State Attorney General [Letitia James] —when I see Crystal People-Stokes, the Majority Leader of the  Assembly—when I see   Andrea Stewart Cousins [Senate Majority Leader], who has broken the barriers there—we know we have three African-American women who are now majority leaders at the city and state level—positions that were previously held by white men."

She continued, “We have broken the barrier of three men in a room….I am so proud to be part of this ‘herstory’  that we're making every single day. We knew, and always knew these wage disparities were present.”

“As we celebrate CWA 1180’s settlement of years-long gender and racial discrimination case against the City of New York we must also recognize that our work to chip away at the glass ceiling never stops,” said Council Member Margaret Chin.  “I am proud to say that the City Council…has been boldly moving the needle on the issue from banning the sexist practice of employers asking for salary history during the hiring practice, to demanding yearly data on pay disparity in New York City agencies, to fighting against sexual harassment in the workplace.”