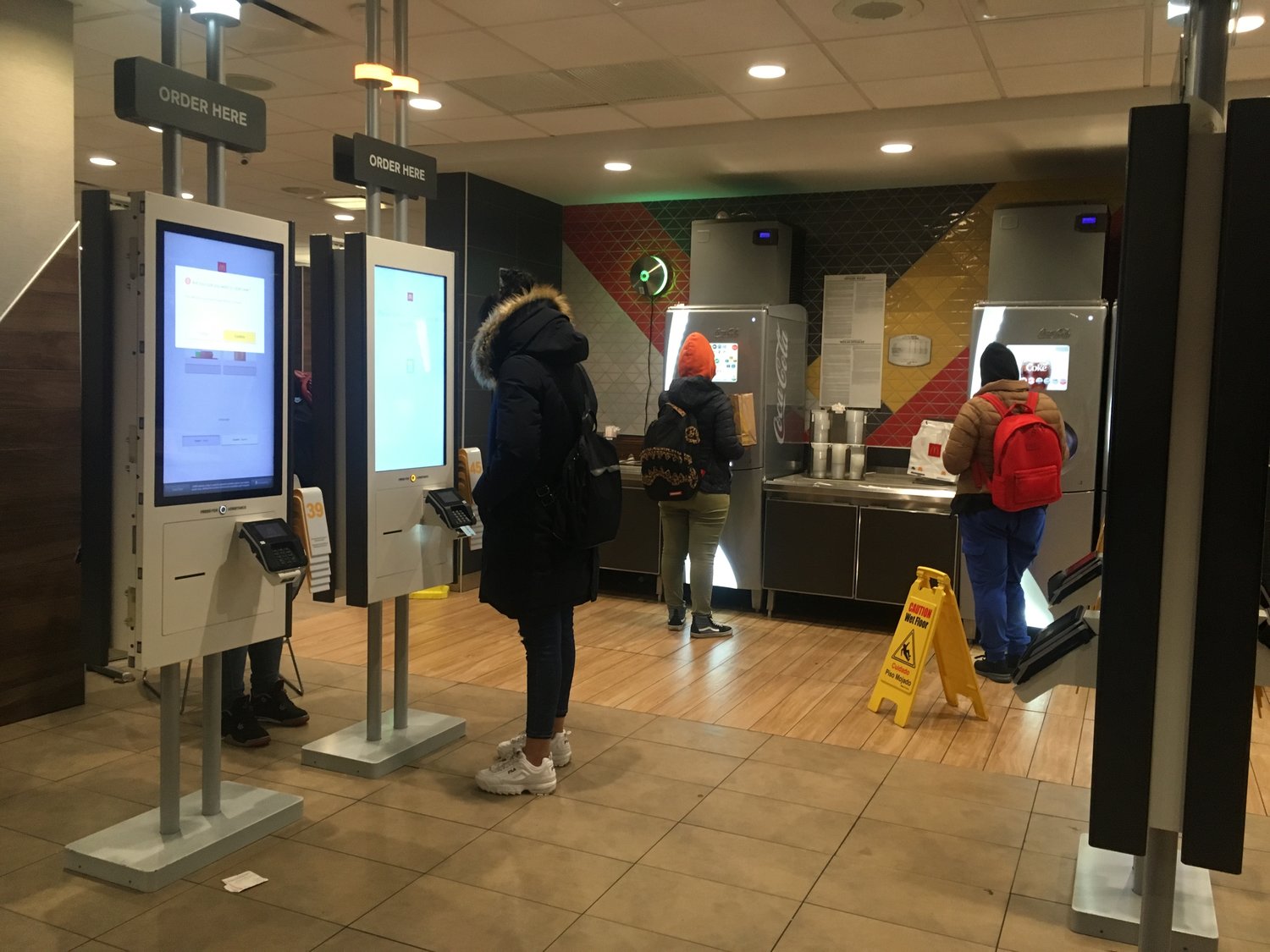 Self-serve kiosks, such as these at this McDonald’s on Chambers Street, are fast becoming features at fast-food restaurants. At a meeting of the City Council's Committee on Civil Service and Labor last week, advocates voiced concern that nearly half a million New York City jobs, the vast majority done by low-income employees, are highly susceptible to automation. They called on officials to set up more “bridge” programs to help those workers develop new skills.

The Chief-Leader/Richard Khavkine
Posted Monday, November 18, 2019 5:15 am
By CRYSTAL LEWIS

City employees may have to worry less about being replaced by a machine than workers across the rest of the country, but more programs need to be introduced to help hundreds of thousands of low-skilled workers, advocates said during a Nov. 13 City Council hearing on how automation could affect jobs.

“The good news is that the city is less vulnerable than much of the country,” Eli Dvorkin, policy director of the Center for an Urban Future, told the Council’s Committee on Civil Service and Labor. The nonprofit issued a report last year that found that 39 percent of job tasks performed in the city could be automated in the coming decades, compared to half nationwide.

That gap existed because there were a high number of jobs across the city in human services (such as 147,000 home health aides) and in creative fields such as design that could not be easily replaced by technology.

But the Center found that 456,000 jobs, particularly cashier and fast-food posts, were highly susceptible to automation, because at least 85 percent of the tasks performed could easily be handled via technology. Automation would likely hurt low-income workers the most: more than half of the most-vulnerable workers were paid less than $40,000 per year.

Bookkeeping and other clerical jobs were also among the fields that had duties that were easily replaceable (including by programs that already exist, such as Excel).

“If there’s one thing that really stood out to me is that automation has really moved off of the factory floor and into the office buildings,” Mr. Dvorkin said. “The level of technical fluency and digital skills required to be competitive in those jobs is increasing dramatically.”

Advocates including the New York City Employment and Training Coalition called on the city to establish more bridge programs, which help train residents with low-levels of educational attainment, to better their chances of developing new skills.

Gregg Bishop, Commissioner of the Department of Small Business Services, said that the city was working to spread the word about advancements in fields such as industrial manufacturing, which has an aging workforce. “Many individuals think industrial manufacturing is still the old industrial manufacturing—‘it’s dangerous,’ ” he said.  “One of the things we’ve been asked [to do] by the industry is to re-brand. Now it’s mainly heavy on math and science and involves babysitting machines that do most of the work.”

I. Daneek Miller, chair of the committee, said that the city needed to find ways to ensure that technology allowed workers “to work smarter and not harder,” including civil-service posts. Barbara Dannenberg, Deputy Commissioner for Human Capital at the Department of Citywide Administrative Services, said that city jobs and services had not been harmed by technological advancements but instead enhanced by them.

“We are seeing that automation is shifting some of the work—maybe some tasks are becoming antiquated—but we’re not seeing jobs or workforce areas where people are being replaced,” she said. “The reason I know this is because we’re not seeing the workforce shrinking or that we’re deleting titles.”

The number of civil servants hired during the past fiscal years has also remained steady, according to data from the de Blasio administration.

Mr. Miller believed that because a large portion of municipal posts were human-service oriented, they were not threatened by automation, but contested the notion that no civil-service titles were being diminished.

“Often, I’ve seen titles attrit down to 5 people, 3 people, and that would not be consistent with what you’re saying,” he said. “There could have been 250 people in a title and now there’s six, but the title still exists.”

He also noted that the city has increasingly relied on vendors to provide IT and other technological services.

The Retail Wholesale and Department Store Union represents about 60,000 retail, grocery store, bakery and dairy-processing employees across the country in sectors that were highly susceptible to automation. Josh Kellerman, the union’s director of public policy, said that RWDSU was collaborating with the AFL-CIO so that technological changes that affect job duties could more-frequently be negotiated in contracts.

“We aren’t opposed to automation but the fundamental problem is the power imbalance in how technology is employed and developed. The technology is not designed with workers in mind,” he testified.