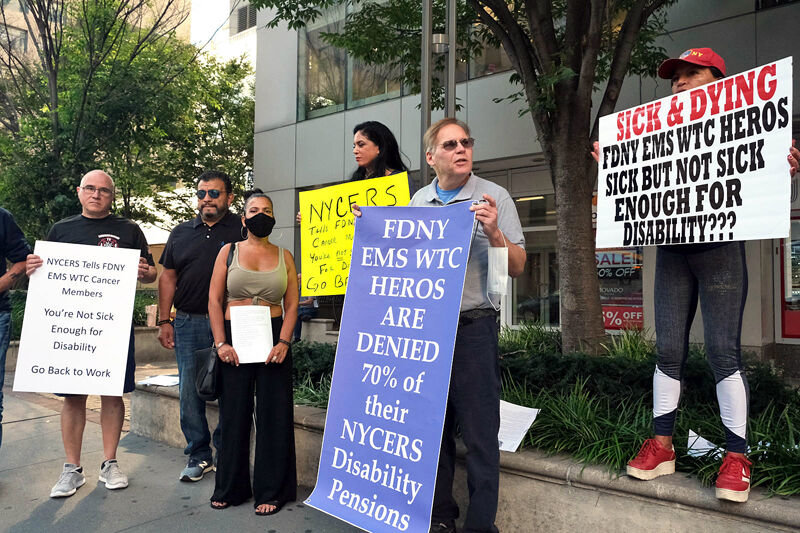 ONE MORE THING TO WORRY ABOUT: Emergency Medical Service employees who survived their labors at the World Trade Center site but claim the New York City Employees' System has wrongfully denied them 9/11-related disability pensions are among the World Trade Center Health Program enrollees who now have to worry that the latter program will run out of funds in three years without congressional intervention.

Without congressional action, the World Trade Center Health Program will run out of money starting in FY 2025, according to the U.S. Centers for Disease Control and Prevention, which oversees the effort providing health care to 9/11 WTC first-responders and survivors.

According to a CDC fact sheet, the shortfall in the program, which has 110,000 participants, was partially the result of a "significant" spike in the number of first-responders and survivors who have enrolled for the annual screening and health care.

The program's costs also substantially increased due to "the number of cancer cases it certifies and treats," according to the CDC.

"Of the approximately 65,000 WTC Health Program members with at least one certification, almost 24,000 (more than 36 percent) have at least one cancer certification," the agency disclosed. "The complexity of treating cancer, especially with other co-morbidities, and an aging membership in general, has increased the Program's health-care costs beyond what was previously estimated."

The original 2011 legislation establishing the program provided for free annual health screening and treatment for all certified 9/11 WTC first-responders. It also included people who lived, worked or attended school in lower Manhattan and portions of western Brooklyn who exhibited symptoms from exposure to the toxic air in and around the WTC site.

Under the program, first-responders are guaranteed free screening for life, while civilian survivors must exhibit symptoms of a 9/11 disease or condition for enrollment. While close to 90 percent of the tens of thousands of first-responders are enrolled in the WTC Health Program, less than 10 percent of the hundreds of thousands or residents, commuters and students signed up.

As a result, the program needed to open an additional Clinical Center of Excellence for survivor members in the metropolitan area. The uptick also triggered the Zadroga Act requirement that the program notify Congress it was nearing its enrollment cap. "As a result, Congress raised the enrollment numerical limitations in the Zadroga Act in 2019 by an additional 50,000 responders and 50,000 survivors," the CDC reported.

"The reduction in cancer-specific mortality was even greater for enrollees diagnosed with prostate cancer and with colon cancer, of which enrollees had nearly half the cancer-related death rate compared with the New York State population," the program reported.

Referring to Fire Department Chief Medical Officer David Prezant, Mr. Chevat said, "Dr. Prezant's report is a key indication of why we need the program fully funded. The program is actually improving the lives of the people who were impacted by 9/11."

U.S. Sen. Kirsten Gillibrand has garnered bipartisan support for her Responder and Survivor Health Funding Correction Act, which would ensure the long-term solvency of the WTC Health Program.

She said in a statement that the program was established a decade ago "to provide first-responders, survivors and their families with the health-care benefits needed to treat 9/11-related health conditions." She urged Senate colleagues "to remember that 'we will never forget 9/11' is not just a slogan, but a reality we must uphold."

Live Up to Promise

"Our country made a promise after 9/11 to always be there for the firefighters, the police, the EMTs, the workers clearing the pile, and survivors, residents, area workers, and students who got sick or injured from the toxins at ground zero," U.S. Rep. Carolyn Maloney added. "The funding provided in the 9/11 Responder and Survivor Health Funding Correction Act will ensure that everyone impacted by this tragic event gets the care they rightfully need and deserve."

According to the CDC, the program was able in the past to "cover the growing health-care costs associated with increasing enrollment, increasing cancer cases, and an aging population" in part by drawing on unexpended funds from prior years.

"This program needs to have the additional funding to fulfill the obligation that they made when they said that these were resources we could rely on for the rest of our lives," said Lila Nordstrom, who on 9/11 was a senior at Stuyvesant High School, adjacent to the WTC.

In the months after 9/11, Mayor Giuliani ordered more than 2,500 Teachers and staff, along with 19,000 K-12 students, to return to dozens of schools in the WTC hot zone in lower Manhattan and western Brooklyn.

Ms. Nordstrom, who organized StuyHealth, a nonprofit that does 9/11 WTC health outreach, said during a Sept. 7 phone interview that many of her peers were unaware that they could qualify for the program.

"There is even an issue with 9/11 survivors understanding that they had an exposure, because it's so rarely reported in the media," she said, adding that women and young adults who were children at the time of the attack were at a disadvantage because the  research into WTC health issues was heavily weighted toward the male first-responder population.