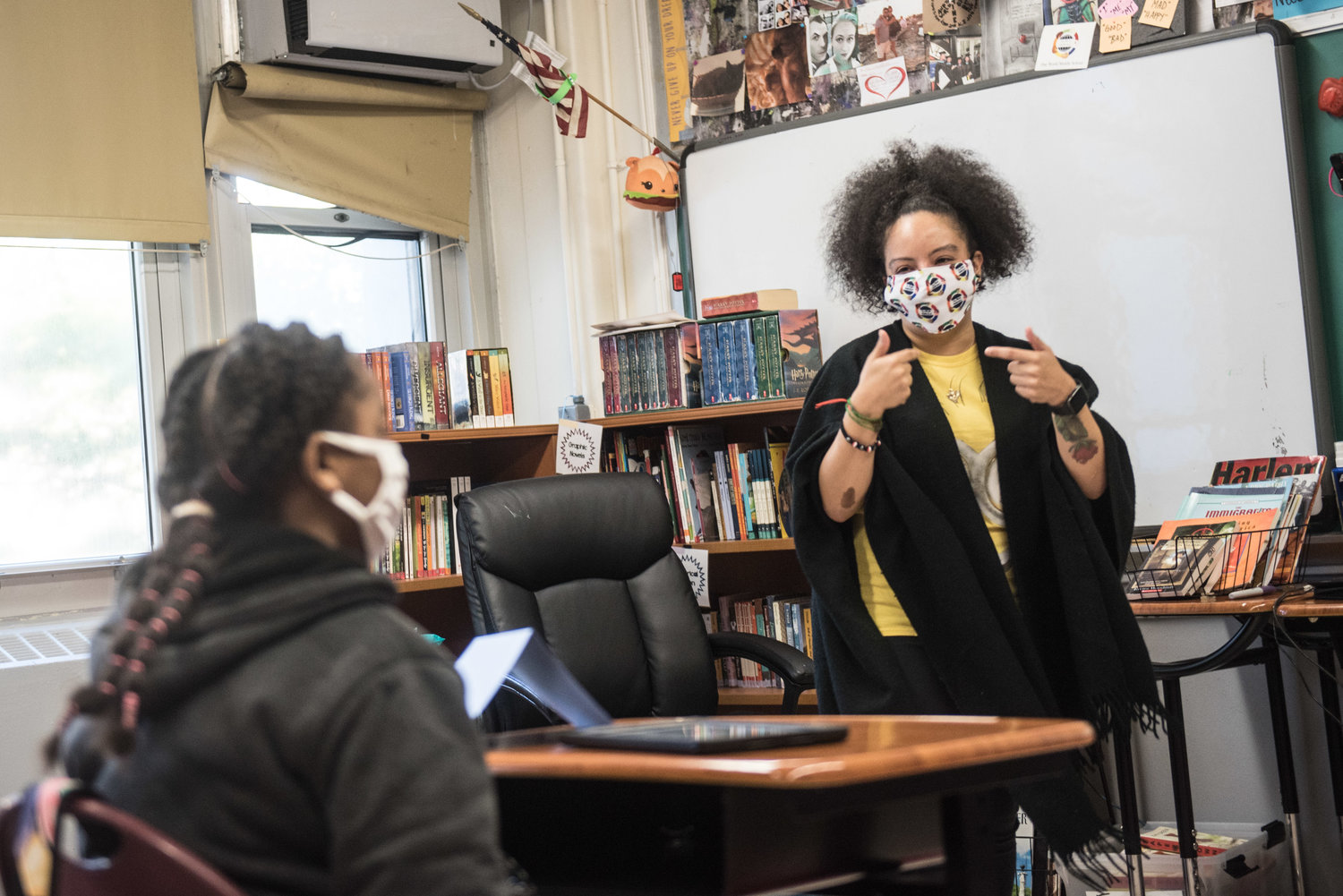 What does "teacher burnout" have in common with music?

Every musical composition ever written in all genres and styles according to Western musical theory is made up of a unique configuration of just 12 tones. You'd think that would limit the number of variations eventually and that originality would no longer be possible.

Yet there are hundreds of thousands of works and each is one-of-a-kind and inimitable. Similarly, there are only around a dozen reasons cited for "teacher burnout,” and every case of weariness and disenchantment is singular and internalized differently. It is a staggering repertoire of opuses.

Most teachers start their careers driven by passion and idealism. It was their dream and the sacrifice of time and money was worth it. But they are bailing out in record numbers nationwide, opting for financial uncertainty and possibly even ruin over aggravated emotional decimation.

What happened? Something is eating away at teachers beyond this melancholy period of national affairs. Blaming the pandemic is tempting and makes sense, but despite the school closings, hybrid-instruction fiascos and other related issues, it  is not the trigger.

Neither is the domino effect of inadequate or stupidly-prioritized school funding. Nor is it parents who at school conferences or public forums no longer concede blanket authority to teachers and policy-makers and sometimes make them uncomfortable or even feel threatened.

Despite everything, all major polls reflect the high level of confidence that parents continue to feel for our public schools.

The mystery of teacher burnout should not be an unfathomable mystery. It isn't inscrutable, like the plenary sessions held by monarch butterflies in Mexico or the perfectly-timed convocation of swallows in Capistrano every year. And it's not due to second thoughts about the essence of the job. As a pure vocation, nothing beats the joy of teaching kids.

Most regrets associated with teaching are caused by bureaucrats and politicians and their various pawns, enforcers and enablers who provide tactical support. This includes contractors, vendors, professional developers, think-tank pundits and ideology-tilted philanthropic "foundations.”

They and ambitious and unprincipled school "leaders" scratch each others' backs, no matter whether they're "reformers,” "progressives," or "traditionalists.”

Teacher burnout is no reflection on the worthiness of its victims. They were disillusioned not by the demands of their craft, but by its hijacking by non-educators or former educators who used the classroom as a rung on the career ladder all along. All teachers are repulsed by any form of child exploitation.

Highly discredited assessment tools have been weaponized selectively against teachers for reasons totally unrelated to their job performance. Teacher evaluation models are in practice primarily gotcha-oriented, rather than tools to identify strengths and weaknesses and sharpen skills.

Weaponizing teacher assessments has become an obsession, and is being pushed with zealotry and by ulterior motives. It is like an epic, unflagging Manhattan Project, frantically pursued, devised and handed down, not to achieve its stated objective, but rather to suppress creativity, curb teacher autonomy and mandate conformity.

"Standards" and "accountability" are valid concepts whose meanings have been misappropriated into buzzwords to justify high-stakes testing of students. This does not so much generate insights into the instructional deficits of students than it furnishes mostly useless and misleading data for anal-retentives at the DOE who need to justify their existences.

It is said that "nature abhors a vacuum." So does entrepreneurship. An internet site advertises "affordable online therapy" by over 20,000 licensed therapists for educators who "struggle with feelings of burnout." There are meditation and mindfulness apps, and counseling is available on how to "adopt a growth mindset" and repel "contagious negativity" and "existential dread.”

The pseudo-scientific Maslach Burnout Inventory, now in its fourth edition, was originally published in 1981 and comports with World Health Organization's definition of burnout.

A cornerstone of the Department of Education's litany of broken promises to teachers is its pledge to institutionalize and spread "shared decision making" with them. If this "reaching out' were sincere, they wouldn't be sending such mixed signals when carrying it out.

Despite nominal representation on "school leadership teams" and being listed as participants on a bevy of committees related to such matters as school budgeting, safety and curriculum, teachers have a mostly symbolic or "advisory"  role in most schools, except those that have an enlightened leadership who are capable at times of standing up to the DOE.

Teacher burnout is spurred by the near total breakdown in student discipline. The deliberate failure to seriously attempt to correct it can be as galling than the mayhem itself. "Restorative justice" is being pushed as a cure-all. It's gotten to the point that if teachers do not altogether reject punishment as a partial means of addressing even violent misconduct, they are deemed to have chosen the wrong profession.

In the rare instances when students are suspended by superintendents for the worst anti-social violations, the duration is often reduced, and disproportionate to the offense. Teacher burnout is intensified by fear that safety is not being treated as a priority. Why else is a plan underfoot to largely eliminate metal detectors even in schools where students bring weapons?

Given current national events and present local policy, some teachers feel they're spinning the roulette wheel of destiny just by showing up for work.

Teacher burnout is also accelerated by the disparate practices of the Department of Education in following up allegations of wrongdoing against teachers and supervisors and in consequences levied upon substantiation. Principals can walk out of their school in the wee hours with a piano on their back and the DOE will give them the benefit of the doubt. If teachers are spotted with a DOE pencil in their pocket, they're Butch Cassidy.

It is wrong for the DOE to imply, by its dispositions, a moral equivalence between guilt and innocence when students clash, but reflexively favor a supervisor who makes an unfounded accusation against a blameless subordinate for being a whistleblower.

The indelible stain of former Mayor Mike Bloomberg's philosophy of management and his hit-men chancellors may be fading, but at an almost imperceptible rate. It holds that there are no managerial skills unique to education. By that reasoning, a manager of a nasal irrigation device manufacturer can be a perfect fit for a school and school leadership can be an entry-level position flaunted proudly by any alumnus with a business background.

We're comparatively lucky in New York City. The United Federation of Teachers robustly champions the contractual rights of its members and is a master player at realpolitik with a moral compass that benefits kids and their parents. The DOE is not given free rein. The union’s omnipresence sometimes acts as a check on the bureaucracy's lack of conscience.

According to a National Education Association poll of its members, 90 percent identify teacher burnout as a serious problem and the majority would not recommend teaching as a career.

Can teacher burnout be cured? How should it be treated? Is it a natural culling of the herd of educators who never should have gone into teaching in the first place, or is it an unnatural harvesting of the best and the brightest? Why is it more pronounced in teaching than in other professions?

The sticking point is not teaching. It's what teaching has become. And the DOE "deep state" has much to answer for. But despite its parasites and inquisitors, there are still many brilliant and devoted individuals in its administration and we must not surrender to a premature rut of hopelessness.

Tom Hobson, an education blogger, wrote "The infinity monkey theorem states that a roomful of monkeys with  typewriters, given an infinite amount of time, will eventually, almost certainly, produce the complete works of Shakespeare. It's a thought experiment about the concept of infinity.”

If this is true, I have infinite faith in the DOE's capacity to right itself.