STAT! Pay EMTs what they deserve 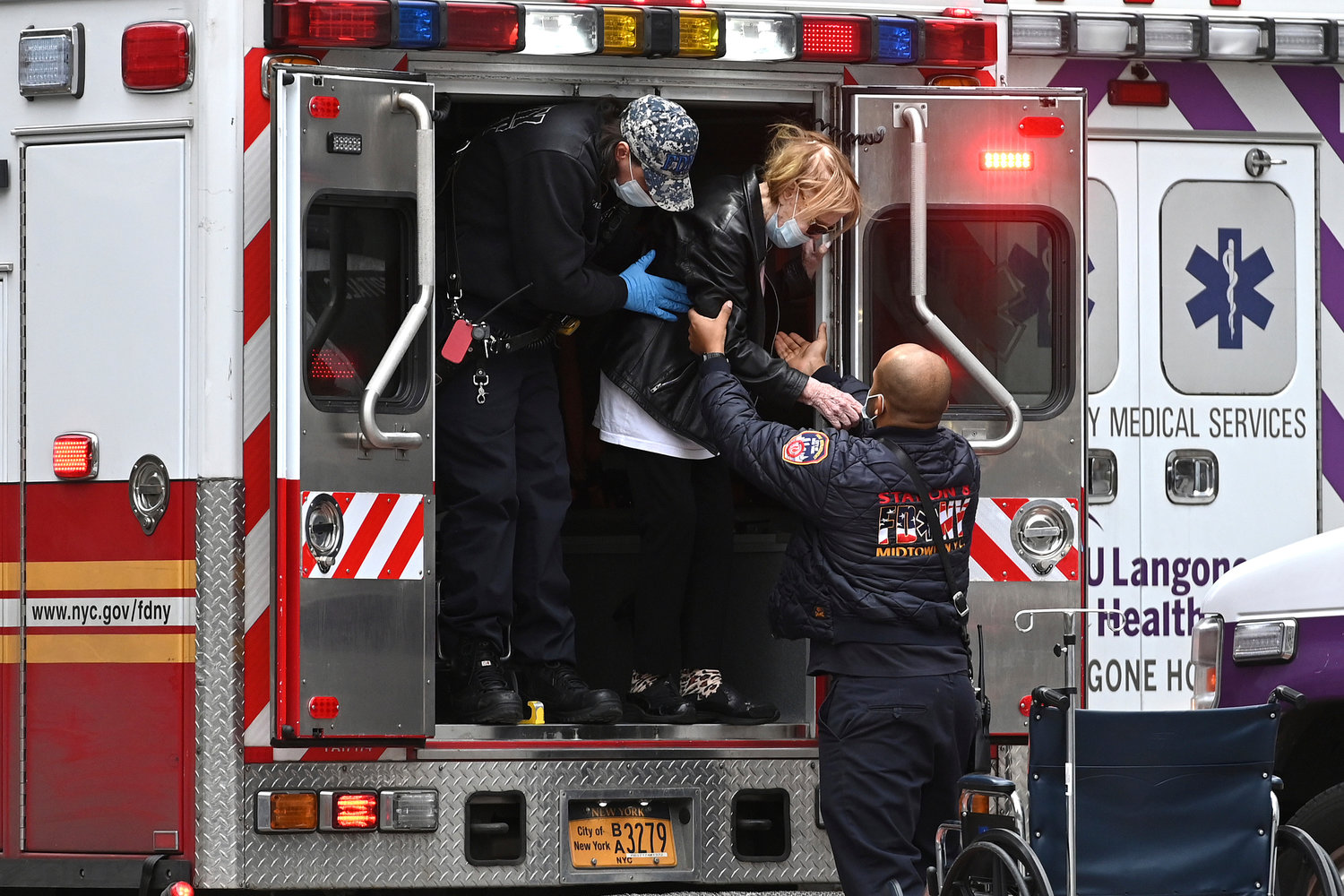 FDNY EMTs assist a patient out of an ambulance outside Manhattan's NYU Langone Health Tisch Hospital in December 2020 during the second wave of covid infections and a record number of hospitalizations.
Anthony Behar/Sipa USA via AP Images
Posted Tuesday, August 16, 2022 6:09 pm
BY RON ISAAC

What's the loudest sound in New York City? It's the bang for the buck we get from our EMTs. Their value is stupendously high but their salaries are appallingly low.

The budgetary hyenas chatter about fiscal responsibility and the worth of workers' services in the free market. It might curb their audacity for a bit if it were their own baby snatched from the jaws of death by an EMT just doing her job on any given day.

EMTs must keep a level head, and make instant, extremely high-stakes decisions with no margin for error. They can't have an off day. No allowance for brain fog. No room for distracting personal issues. They wrestle with fate. Destiny can be merciless and haunt us with guilt and recrimination, but these civil servants can walk it back because they know how to intubate.

The Independent Budget Office recently reported that average ambulance response times for Advanced Life Support medical emergencies have slowed down alarmingly. Minutes are eternities at traffic wrecks. There is no negotiating with the clock when brain death looms from acute illness.

Because of the delays, some people have died who might have been fully recovered.

Not inadequate training. Not a "job action" by disgruntled employees. It's said "you get what you pay for.” If the City believed that, they'd be paid like senior executives.

Obviously the slowed ambulance response times does not mean the EMTs are loitering! The technology is reportedly state-of-the art and logistical snafus or poor management policy are ostensibly not implicated. Still, it is the direct and inevitable result of the City's "let's see what we can get away with and for how long" practice of ignoring the recruitment and retention crisis.

Firefighters are underpaid. EMTs are grossly underpaid. All labor is dignified and we mustn't demean any line of work. But EMTs should earn more than entry-level bureaucrats or greeters at Applebee's.

Mayor Eric Adams is in no hurry to correct this injustice. He has entrusted this challenge to the  permanent FDNY commissioner, but hasn't got around to appointing one since last February.  During the time it took to compose this commentary so far, lives have been saved in every borough by the EMTs. Should they really have to depend on coupons for their families' staple table-fare?

No union worker is ever overpaid. That should be the universal credo in both public and private sectors and the cornerstone of labor negotiations. Fair contracts are rarely won on the basis of merit alone, no matter how compelling.

On the day you see a flock of flying giraffes, you will see an employer who is generous to workers for no other reason than moral dictation.

The Communication Workers of America and the International Brotherhood of Electrical Workers have wrested, from what appears in preliminary reports, a decent settlement from Verizon. Corporations never submit willingly, so credit is due to the persuasive members.

Let's not be suckered into the facile belief that management stands alone as the adversary of unions. I'm not referring to any particular unions or personalities. Don't break bread with those who break our chops. Only bond with them to the extent it advances members' interests.

Don't be overly grateful if they restrain themselves from accusing you of theft of service over a few seconds on the clock. Many bosses have four-hour liquid lunches and the business culture affords them perks that beget more perks. They get V.I.P treatment in airports, restaurants, courthouses and IRS hearings, while workers are counseled to be more frugal and toil extra tours in order to dodge loan sharks and foreclosure.

Apart from their accomplices among the "right-to-work" business collectivists, think-tank resident scholars, veiled philanthropies and media board rooms, there are some fifth-columnists and even inadvertent allies within the rank and file.

Union busters bank on internal divisions within unions and envious rivalry among organizations within the movement. One of many tactics they use is isolation by flattery. That's what they did, for instance, by telling teachers that they are better than their unions and should dissociate from them. If lions could talk, they'd say something similar to zebras.

Even minor issues, such as  rules of remote/hybrid/or mandated workplace attendance and vaccination exemptions have been used to alienate groups of workers from each other.

Stopping short of calling management mortal enemies (since melodramatic language is a distraction), let's remember that hierarchy has its privileges. In schools, for instance, teachers are still fainting in classrooms where no air-conditioners have been installed, despite years of assurances.

Fans are sometimes not allowed because of hazards and windows may not open because they are defective or permanently locked to prevent flights of children and furniture to the courtyards below. Kitchen staffers work in environments where temperatures may be dangerous and even illegal.

It's always St. Tropez in the supervisors' offices. For them, luxury is a mindset and a sacrament.  And obviously a priority.

I'm no historian of labor-industrial relations, but I know we're still in the dark ages when it comes to recognition of the equality of workers and management as a matter of common attitude and as codified into law. Already in 1998, an agency of the European Union stated, "The representation of employees on the supervisory boards, boards of directors and similar bodies in companies remains an important form of employee participation in many EU countries.”

Among all the nations of the world, the pay ratio between the average CEO and employee has for many years been by far the highest in the United States. According to Business Insider, Jeff Bezos earns around four and a half million dollars an hour or around 12 milliseconds to equal what a large chunk of the workforce gets in an hour.

That's of course an extreme example but the lopsided disparity is illustrative of a mindset problem that is built into our nation. It is obscene but not more so, than in a different way, than what can go wrong when, in very rare instances, unions take stands on global issues.

The whole world is the bailiwick of unions. They should take stands on social justice and environmental issues, for instance. But arguably there are times they cross the line. Last year's resolution passed by CUNY's Professional Staff Congress concerning the Middle East conflict ripped open wounds and estranged much of its membership.

I'd like The Chief's readers to weigh in on what the connection should be, if any, between unions and events that do not directly bear upon their collective-bargaining  mission.

It is not above union workers' pay grade for them to be immersed in local, national and international affairs. We must never be afraid to speak our minds. We built this country and shaped society. We are, or should be, unified by our core values.

Above all, we must not be distracted or deterred. Our primary fights belong in the arena of our workplaces and the legislative halls.

In closing, I revisit my opening thoughts about the EMTs. In the time it took for me to craft an idea and twist a phrase, they have brought back New Yorkers from the cusp of oblivion and back into their loved ones' arms.

Honor them. And make the city pay!