Brewer is first to publicly address issue in detail 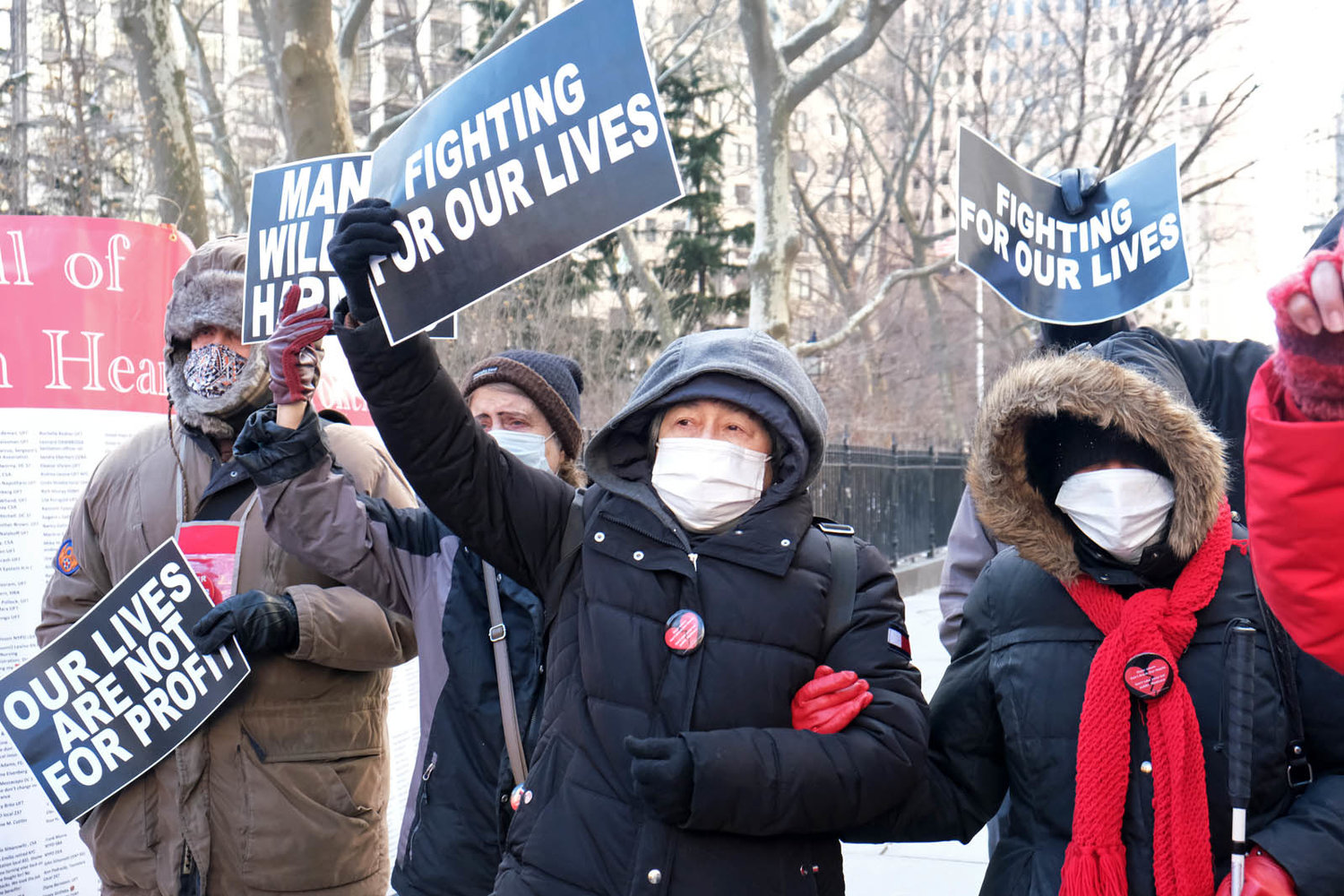 Municipal retirees opposed to the city’s proposed switch of their Medicare plan to a private, for-profit plan rallied near City Hall in February.
Michel Friang/The Chief 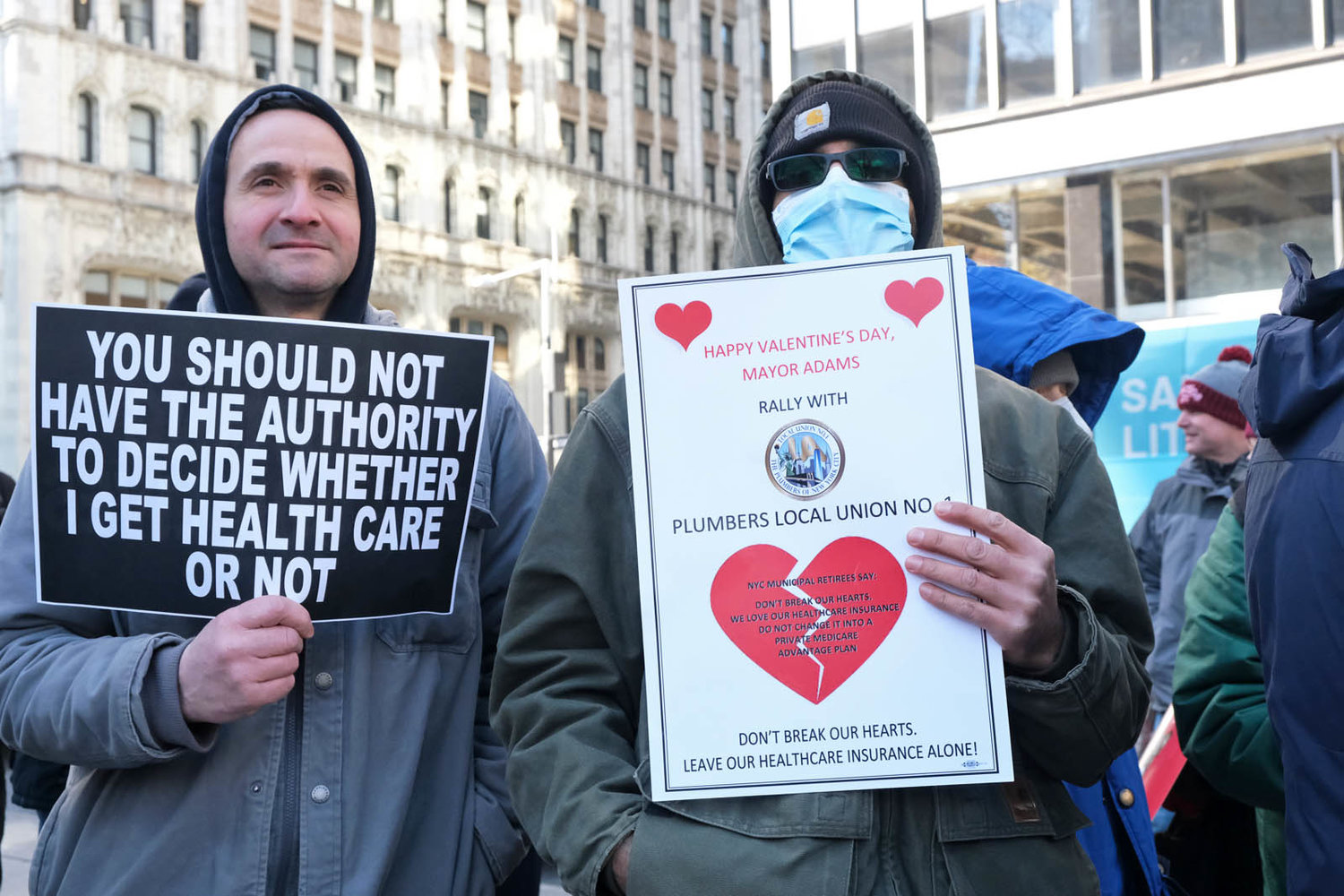 Eleven municipal unions voted against a Municipal Labor Committee resolution supporting an amendment of the administrative code that would permit the city to charge retired city workers for some of their health coverage. An earlier version of this story had it that seven unions had voted against the resolution.

Municipal retirees battling the city’s proposed shift to a private Medicare plan for its 250,000 retired workers have a prominent ally in the City Council.

In a lengthy note she appended to a Twitter post last week, Council Member Gale Brewer said she had long been wary of having insurance companies act as “gatekeepers” to care, and indicated that a move by city officials to scale back retirees’ health care would renege on assurances made to municipal workers. She urged city officials, the retirees and municipal unions to find common ground.

The Dec. 19 note, later included in the weekly newsletter to her constituents, followed by four days a determination by the chair of a policy committee that the city must switch the retirees from their traditional Medicare plan to a cost-saving, private-sector Medicare Advantage plan.

Brewer, who represents the Upper West Side, said that private health-care insurers and not medical practitioners often have the final say on how and which procedures will be covered by insurance, to the detriment of patients.

“Keeping their current insurance plan — called Senior Care — is critical in retaining access to their doctors and ensuring continuity of care,” she wrote of a supplemental “Medigap” plan that could also be phased out unless the Council acts to amend the city’s administrative code.

Brewer, who previous to her current tenure served 12 years on the Council and eight years as Manhattan Borough president, is among a very few Council members to have publicly discussed the Medicare matter in any detail.

Martin Scheinman, who chairs a committee tasked with addressing the delivery and cost of health care to municipal workers and retirees, concluded that “the mounting deficit” attributable to “several components” of the city’s health plan necessitates a switch from traditional Medicare to a plan overseen by managed-health-care company Aetna. Officials estimate the switch will save the city $600 million a year through the receipt of federal subsidies. The savings would help replenish the city’s Health Stabilization Fund, which supplements employee welfare funds.

Scheinman directed the city and the Municipal Labor Committee, the umbrella organization of public-sector unions, to reach agreement with Aetna on its plan by Jan. 9. The alternative, he wrote, would be to find “another revenue source which, inevitably, shall lead to premium contributions.”

He also said that unless the Council amends the Administrative Code within 45 days to allow the city to bill retirees who elect to continue with their Senior Care coverage, that plan will no longer be offered.

The Council, though, has for months been reluctant to take up the amendment issue, with members unwilling to even discuss the matter in detail. To this point, Speaker Adrienne Adams has addressed the issue publicly only insofar as to say that the Council is “moving deliberately and thoughtfully” on the issue. Her office last week said only that it was reviewing Scheinman’s findings and decision.

In her note, Brewer said that no Council member had yet introduced legislation to amend the city code.

She also noted claims by retirees’ groups that they have identified recurring annual health-care related savings of more $300 million, as well as another avenue of securing hundreds of millions of dollars in federal funds to prop up the city’s health plans. She urged the retirees and city officials to discuss the matter, “as there are compromises that are a win-win for everyone.”

But Brewer also was adamant that the city had long ago made a commitment to its municipal workers. “The retirees were promised Senior Care, and a promise is a promise,” she wrote. “All sides should sit down together and work this out.”

City officials and Municipal Labor Committee Chair Harry Nespoli have assured the retirees that any private plan would be as good or even better than the current plan.

“The administration is committed to offering quality and sustainable care for our retirees,” the city’s labor commissioner, Renee Campion, said in a statement last week. “The arbitrator’s decision reinforces the need for Council to take action in order to allow retirees a choice of the free Medicare Advantage Plan or to pay approximately $200 a month to have the Senior Care Plan. We look forward to working with the Council to preserve retiree choice.”

Retiree organizations, though, have pushed back on city officials’ claims regarding private Medicare, saying that providers’ profit motives would by definition outweigh consumers’ health concerns. Those apprehensions have been borne out by proposals from federal health officials to establish new regulations for Medicare Advantage providers that would address complaints from consumers, including that some plans could be improperly denying patients’ and doctors’ request for care.

The NYC Organization of Public Service Retirees railed against Scheinman’s findings, suggesting that his conclusions are the product of decisions made beforehand by city officials and the majority of municipal unions.

In a statement issued a day after Scheinman released his findings, the organization also criticized city officials, who it said was not being forthright after agreeing to meet. The organization called for frank discussions. “The proposed path by the City is NOT the only way to savings,” the statement said. The organization, which has successfully contested aspects of the planned switch in court, has suggested convening a blue ribbon panel to identify ways for the city to save on health-care savings. But, the statement continued, “the MLC has adamantly opposed an independent fact-finding investigation, probably because they don’t want anyone turning over rocks that would expose years of collusion and mismanagement.”

James Davis, the president of the Professional Staff Congress, one of 11 unions to vote no on an MLC resolution in support of amending the administrative code, urged the union’s members to contact their Council members to encourage discussions among the retirees, the MLC and the administration “to find another way.”

Earlier this month, the PSC, which represents CUNY faculty and staff, proposed in a policy paper that rather than switch the retirees to private Medicare, the city should instead allocate $500 million into the stabilization fund in each of the next three fiscal years.

The union suggested this would give the city and the MLC time to come up with longer-term solutions to affect health-care savings. Davis said the plan has gained traction with some Council members “but it faces stern opposition” from the city and most unions that make up the MLC.

Nespoli, the MLC chair, did not respond to several attempts to reach him for comment.

The retiree organization’s president, Marianne Pizzitola, a retired emergency medical technician, said she was prepared to resume litigation against the city should the Adams administration proceed with the switch.

Her organization’s statement said that although it was understandable for the city to seek health-care savings, “doing it on the backs of senior citizens and disabled first responders is not just unfair, it is illegal.”

It urged Mayor Eric Adams “to do the right thing” and confer with the retirees on their suggestions for finding savings. “There are 50 years of promises, collective bargaining agreements, legislation, and past-practice that set a powerful precedent,” the statement said.