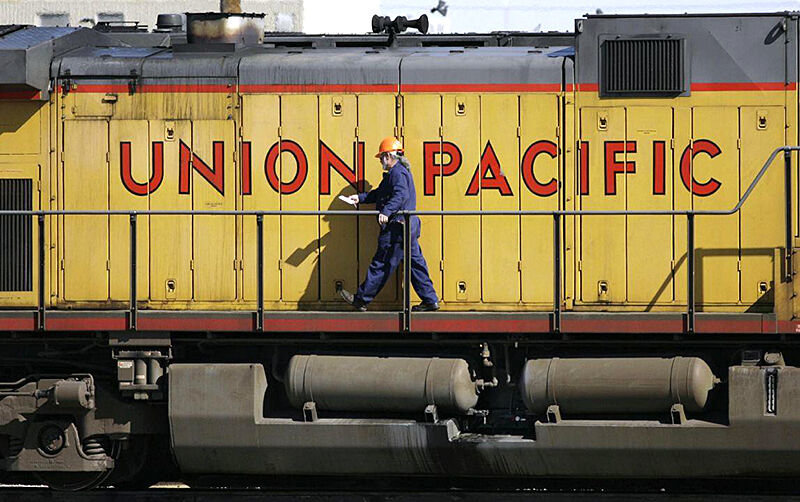 Last month, the remaining four of the largest railroad unions voted to reject a federally mediated tentative agreement. If the strike begins as early as Dec. 9, it could disrupt about 28 percent of all freight transported by train in the U.S. If that happens, we will see the impact of workers with the power to disrupt the national global supply chain.

Although only four of the 12 unions voted to reject the contract, these unions represent about 55.5 percent of all railroad workers. Since large minorities of members of some of the other eight unions also voted to strike, it will likely spread to the other unions. This is because the 1926 Railway Labor Act (RLA) allows workers to recognize picket lines and engage in secondary solidarity strikes, many workers from all 12 unions could end up striking even if only one union decides to pull the trigger.

The railroad strikes in 1877 and 1894 I wrote about in my first book, “When Workers Shot Back,” disrupted much of the country and demonstrated the power of industrial unions. After the 1922 national railroad strike Congress passed the RLA in 1926. The law imposes a byzantine process of collective bargaining on the railroad unions in order to strangle their ability to engage in disruptive strikes. To strike, workers must overcome multiple layers of bargaining, federal arbitration and even the president and Congress, which are empowered to impose a contract.

This time it appears that, with the guidance of the inter-union coalition Railroad Workers United (RWU), railroad workers have finally been able to get the point of legally striking.

It’s been a long road to get there. Bargaining began in late 2019 and has been hung up on issues of understaffing railroads with as few as one worker, the refusal of the companies to allow for even a single paid sick day, and the use of just-in-time “Precision Scheduled Railroading,”which forces workers to do multiple back-to-back shifts, which keeps them away from their families for long stretches of time.

Not surprisingly, many workers are leaving the industry. While train cargo traffic is expected to continue to grow, the workforce on Class I railroads shrank by 29,000 workers between January 2016 and February 2020 and another 10 percent since the start of the pandemic. According to the U.S. Bureau of Labor Statistics, the total number of workers fell from 540,000 to 144,000 between 1980 and 2020.

While labor costs have declined, service has worsened, fees have risen and railroad company profits have skyrocketed. According to the New York Times, the profits of the seven largest companies nearly doubled in the past decade. Six publicly traded companies paid out a stunning $146 billion in stock buybacks and dividends. One of the largest, BNSF Railway Co., is owned by Warren Buffett, one of the world’s richest men.

The strike won’t be about pay since the proposed contract includes large increases and an annual bonus. Rather, this strike will be about safety — for all of us. With numerous instances of accidents by understaffed “bomb trains” carrying combustibles, crashes have garnered bloody headlines such as the tragic 2013 Lac-Mégantic, Quebec, disaster when the oil train broke loose, destroyed the town and killed 47 people.

In an email comment, Ron Kaminkow, a locomotive engineer and RWU organizer, points out that “after decades of give backs, concessions, and humiliations, railroad workers are fighting back. We are beginning to realize our power.”

If SMART-TD, Maintenance-of-Way, Signal Maintainers and Boilermakers go out on strike, in a first significant job action since a two-day strike in 1992, they will demonstrate the power of well-organized workers to use their position at critical choke points. Choke points are critical junctures in the global supply chain, such as railroads, information technology, warehouses, trucking, delivery, ports and platforms, where organized workers have the most power even with minority unions.

Regardless of the fear mongering of the mainstream media that a railroad strike will disrupt the distribution of goods and raise prices, a rail strike will be an immense boost to all workers.

Kaminkow points out that “a nationwide rail strike at this point would be extremely effective. And it would empower and inspire not just railroaders, but tens of millions of other workers who are fighting back against exploitative and degrading working conditions in industries across the spectrum”

As I discussed in my September piece on Starbucks worker organizing, organizing at choke points is a critically important part of a strategy to rebuild the workers movement. Choke points can be found anywhere we work. Disruptive strikes at some of these choke points can amplify their impact throughout the national and global economy. And when that happens, workers can gain power and transform society.

If and when the rail strike happens workplaces connected to the rail supply chain will become vulnerable to disruption. Workers who are ready to take solidarity action in these locations will see their own power grow and give them the advantage for tipping the balance of power back in our favor.

Robert Ovetz is the author of “When Workers Shot Back” and editor of “Workers’ Inquiry and Global Class Struggle.” His new book “We the Elites: Why the US Constitution Serves the Few” is out now.