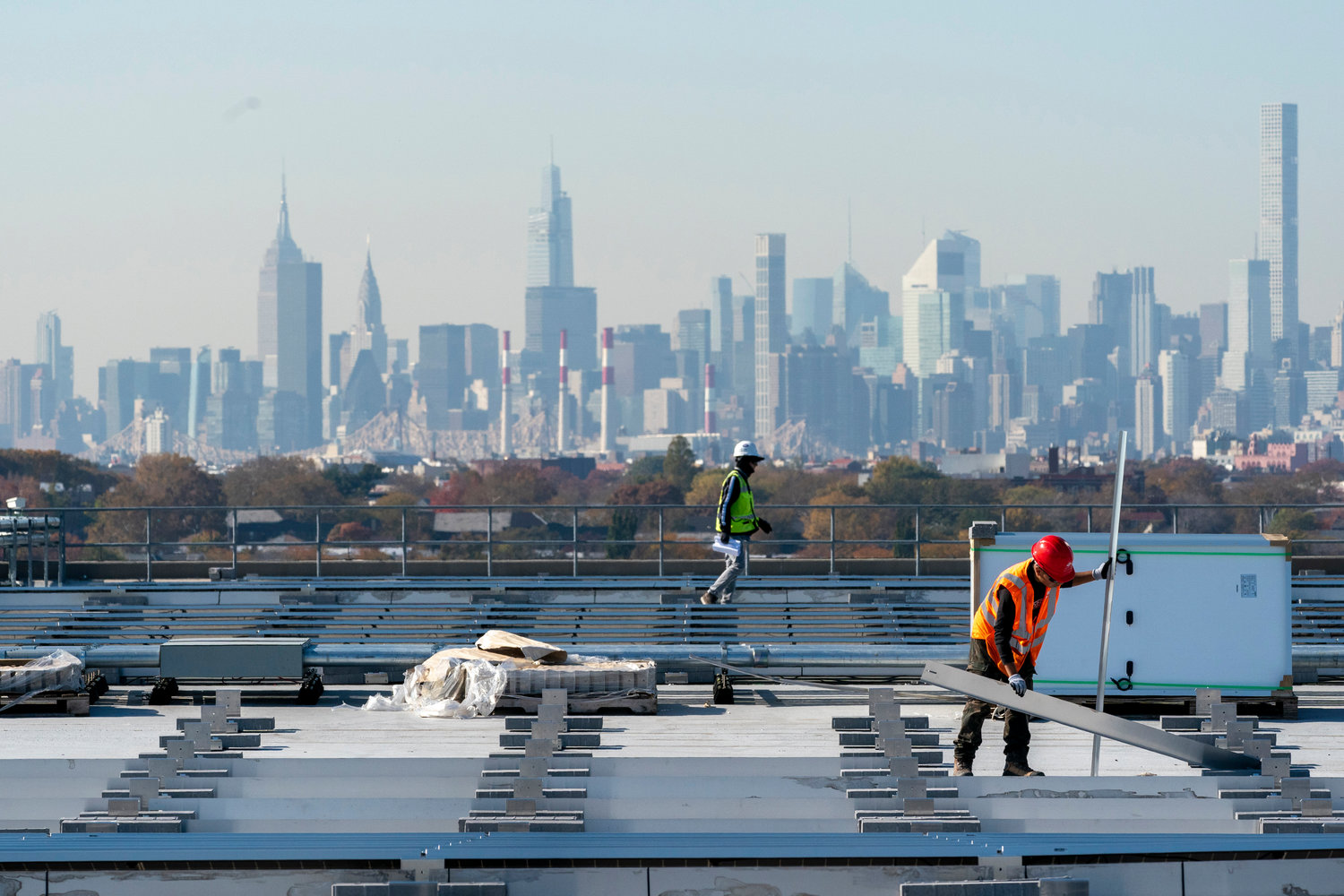 Electricians with IBEW Local 3 installed solar panels at LaGuardia Airport in November 2021. Starting next fall, employers will be required to include a salary ranges in job postings.
Mary Altaffer/AP Photo
Posted Friday, January 13, 2023 12:00 am
BY RON ISAAC

Which is easier to figure out: the reason that pigeons are incapable of walking without bobbing their heads, or ingenious and devious ways that employers will devise to circumvent and weasel out of fulfilling the spirit while technically complying with New York's new pay transparency law?

It's already in effect in New York City and binds companies with at least four employees, including independent contractors. It will take hold in the rest of the state in September.

The law, which requires the posting of hourly or annual salary or minimum and peak salary ranges in job advertisements, is crystal clear, but given many employers' proclivities, we can predict there will come the blur and fog of calculated "misunderstanding" from those whose purpose is to frustrate the historical pay inequity that has victimized primarily  women and people of color, and bedeviled our society.

When the jaws of the law bite down on violators, it should be with sharp teeth, not soft gums.  But for wily employers, the law's straight-jacket may be more of a tank top.

According to the Commission on Human Rights, the word "salary" does not refer to total compensation and, the commission underscores, specifically  exempts:

1)  Health, life or other employer-provided insurance

2)  Paid or unpaid time off work, such as paid sick or vacation days, leaves of absence or sabbaticals

3)  The availability of, or contributions towards retirement or savings funds, such as 401(k) plans or employer-funded pension plans

5) Commissions, tips, bonuses, stock or the value of employer-provided meals or lodging.

The law leaves it to the employer's discretion whether to include information about some non-salary benefits. Restricting "compensation" to the narrow reference of straight salary is an invitation to employers to exploit their creativity to flout the spirit of the law.

The shell of a statute to redress injustice is itself an act of affirmative injustice.

The law requires employers to include in their vacancy announcements a "good-faith" indicator of annual or hourly salary. What is "good faith"?  It is a notoriously elusive term. Slippery as an eel.

For a law to be truly visionary, it cannot be blind to potential evasion. Foresight must be built into it and there must be no escape for those who break it. A nobly conceived law is substantially useless if it can't thwart those who would defy it.

It's a good sign, though, that posted salaries cannot be open-ended, such as "15 per hour and up.” However,  the law is too lenient in that it  imposes no civil penalties for an initial violation.  Thereafter, there is a sizable dollar liability, but it's one that many larger employers may accept as part of the cost of doing business, like tickets for double-parked FedEx trucks.

It should have been even more finely tuned and tempered. Its mandates must be airtight and lawyer-proof. Human resources departments must be held to a higher standard of equity enforcement, not merely led to it.

The law was established to assure economic parity and enfranchisement of all comparably eligible workers. There are some encouraging signs that it has traction. Citigroup is among the large corporations that appears to be sincerely implementing it.

But some vagueness remains to be ironed out or cleaned up. One attorney, quoted by CNN, observed that "a personal outreach, such as a phone call or a conversation, would not be covered, as it is not a written advertisement.” What if by letter or email?

The law will not automatically level the playing field in the workplace, but neither will it allow a stale and disreputable status quo of illusory equal job opportunity to thrive. A job that is available to an applicant conditional on their accepting inferior pay is not a legitimate job offer at all.

Employer bigotry is no less incriminating when it is subconscious. It will linger stubbornly if tolerated. It is not enough to inhibit the brazenness of disparate economic opportunity that suits some renegade HR cultures.

Making the law too flexible or patiently awaiting its implementation would only neutralize it. The liberties that some employers may take to defeat the its intent must be anticipated and headed off.

It also covers fully remote positions, and will have an impact on recruitment culture, because HR professionals will no longer be able to hold their cards close to the vest when negotiating with prospective hires. And employment agencies can only promote job listings that conform to the new law.

Katie Donovan, the founder of the consultancy Equal Pay Negotiations, points out that "There's definitely a mindset that the job of recruiting and hiring is to bring in the best person at not a penny more than needed. And the best way to do that is don't tell them how much you actually have available. Keeping the number under wraps can also be a negotiation strategy.... Publishing salary information also means that competitors and current employees can see what a company is paying.”

CNN speculates that the new requirements may "streamline" the process of finding a job and encourage greater trust because of its apparent openness. That would be a collateral benefit.

Pay equity, particularly with respect to women and people of color, must be immediate, not gradual. There must be no deference to the bad habits of the past. That is why the law sensibly forbids employers from requesting the salary history of prospective new hires.

Is it possible that there is a logical basis for employers  not listing salary on their job postings except for perhaps saying it's "negotiable"?  Here are a few comments from a few years ago from the flexjobs.com website:

● “Withholding salary gives employers more negotiating power…. companies  with a remote workforce don't have to pay as much for employees living in rural areas with lower costs of living. Often, candidates from smaller towns are satisfied with a lower income … though they may have the same skills.”

● “Employers want to avoid competition between current and new employees. In a perfect world, all employees doing the same job would male the same amount of money when they started out.”

● “Employers want to avoid competition between other companies within the industry.”

To the above, I say that we must radically update what is "realistic" in the pursuit of a "perfect world.” Rationalizing her strategy for getting a bang for a buck, one employer explained that it makes no sense to “value you before we start talking.”

One job seeker suggested that salaries should be clearly posted for the same reason as a nutritional analysis appears on the packaging of food items. Now that's more like it!

The transparency legislation is a prescription for moderation.  It doesn't call for economic reparations or favoritism. It will not harm anybody except in the spoiled minds of the beneficiaries of historical biases that have hurt other people. Folks who refuse to embrace the worthiness of rudimentary economic justice as codified in "equal pay for equal work" legislation must not be humored any longer.

It aims to assure pay equity in the workplace, but accuracy and appropriateness of job descriptions, and objectivity of performance evaluations, cannot be guaranteed. That means that the transparency laws could be indirectly undermined by enterprising employers (and we know how they value "enterprise"!).

Issues of the workplace are like organs in the human body. When there is failure in one, eventually the whole environment collapses. That's why we must never allow complacency to worm its way into our celebrations of progress.

We must redouble our activism and keep our eyes open and dream.