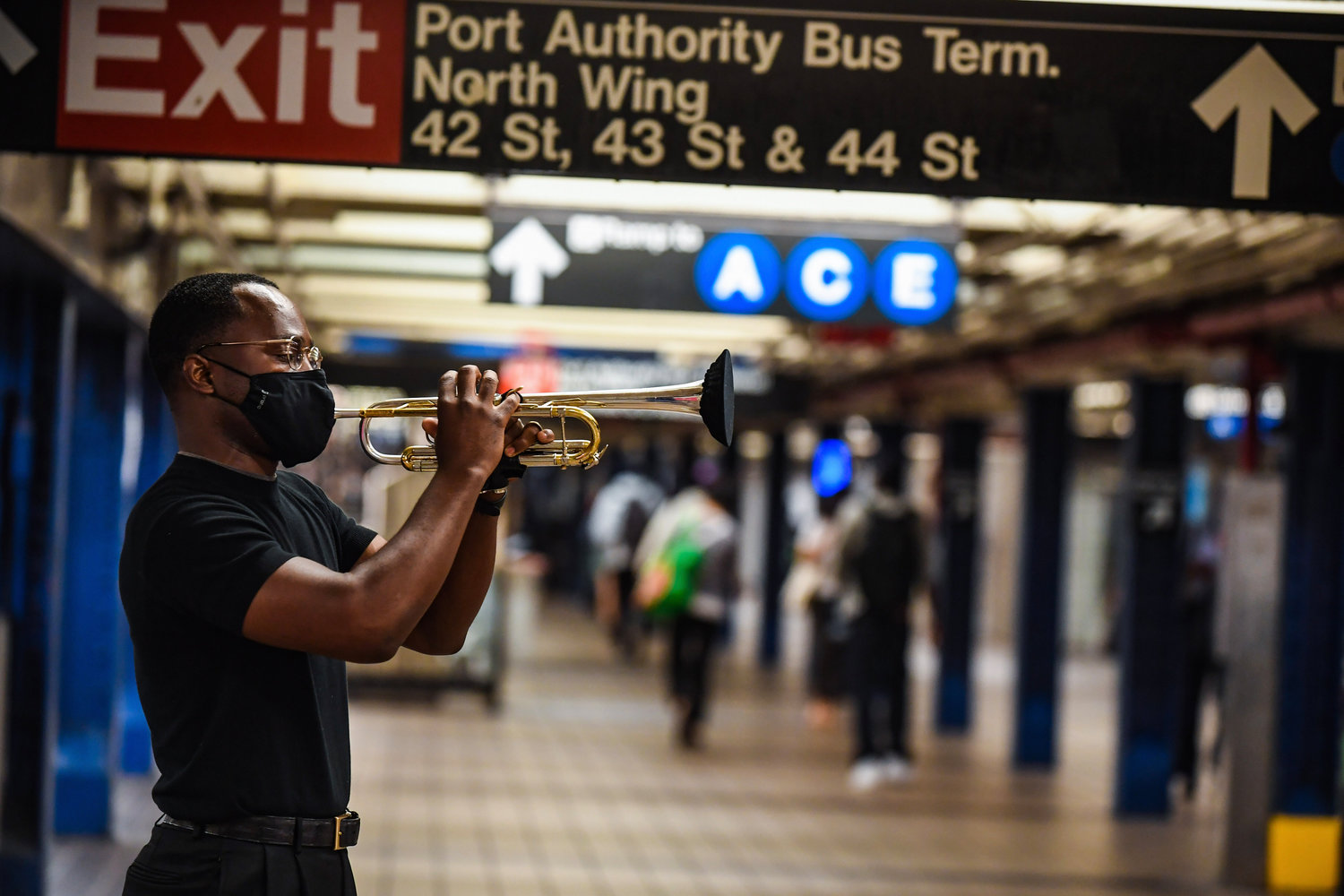 Trumpeter Eganam Segbefia at played his instrument at the 42nd Street/Port Authority station. After a 15-month hiatus because of the pandemic, the MTA’s Music Under New York program returned to the subway system in early June 2021.
Marc A. Hermann/MTA 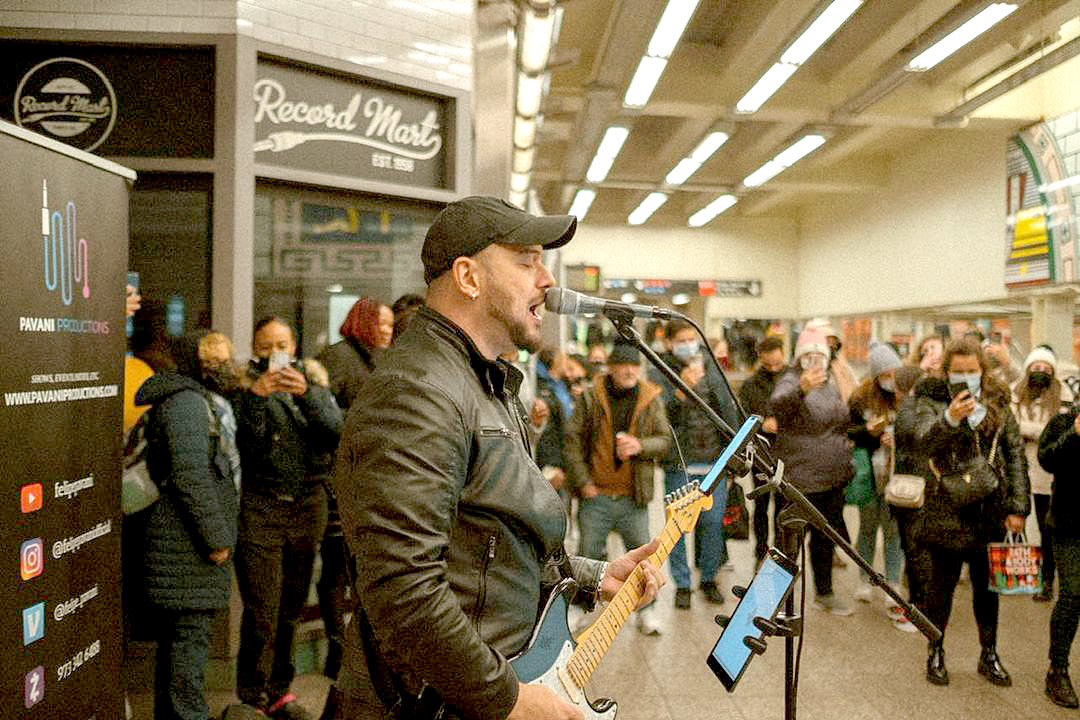 Felipe Pavani is a Brazilian subway busker who was first selected to the MTA "Music Under New York" program in 2017. He has been performing rock & roll hits in New York subway since then, often attracting sizable crowds at busiest spots including Time Square and Herald Square.
Shihao Feng/The Chief 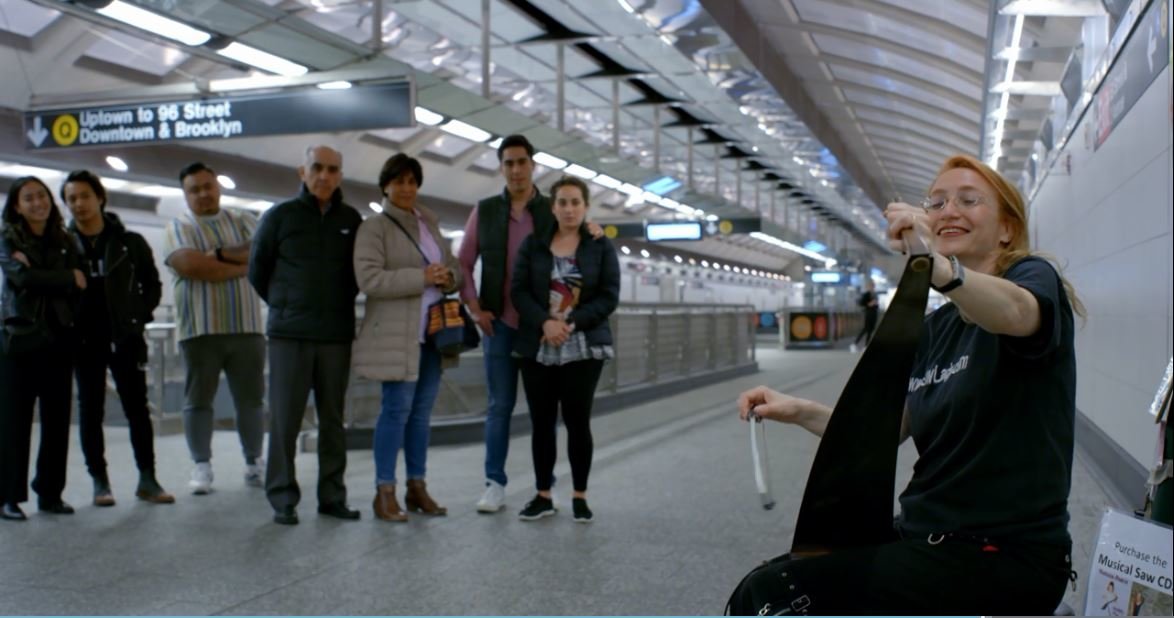 Natalia Paruz, AKA "The Saw Lady," has been playing the musical saw in the New York city subway for 27 years. She still believes that busking can "turn a hectic lonely space into a friendly, welcoming one."
Shihao Feng/The Chief 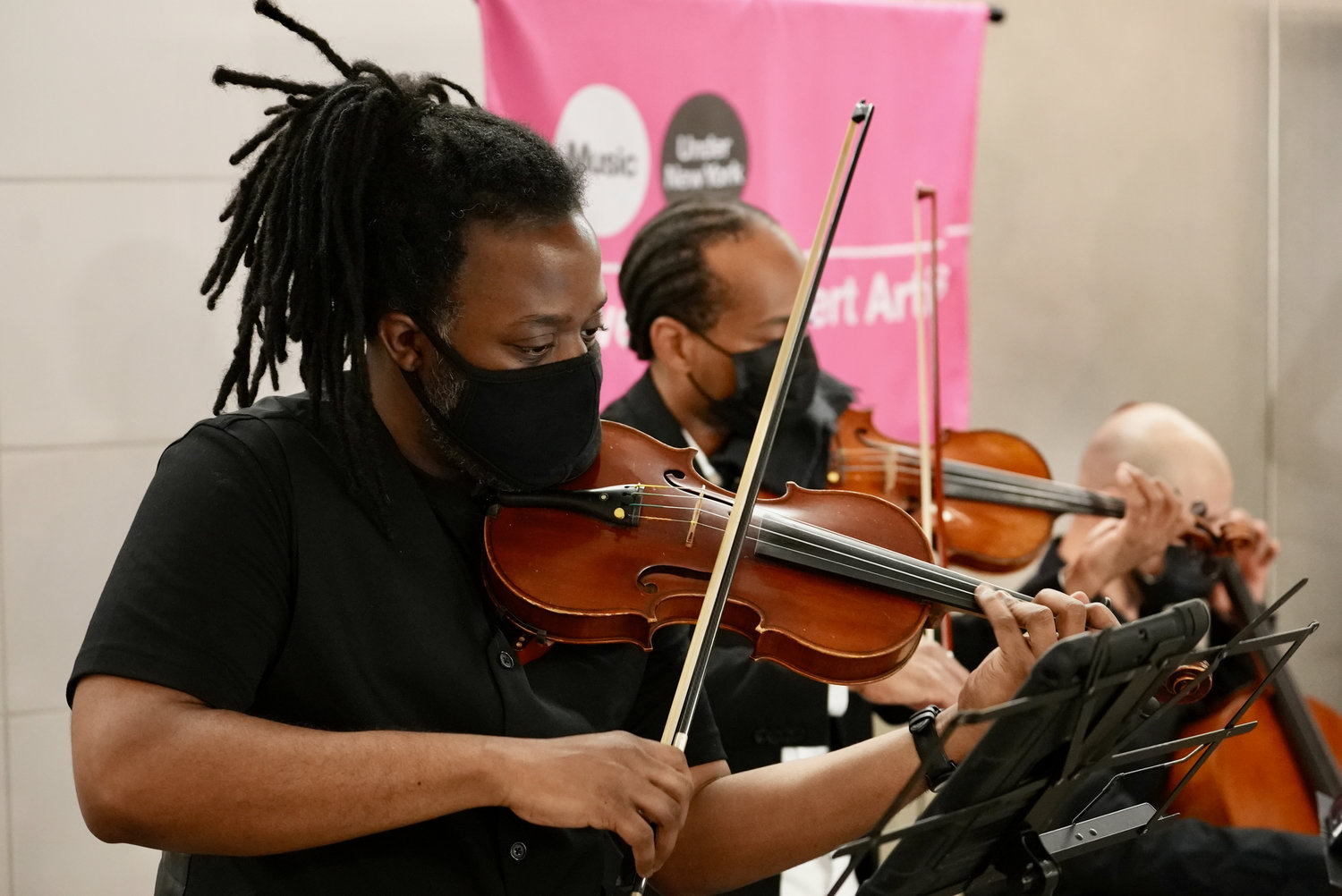 The MTA’s Music Under New York has essentially three criteria, according to Sandra Bloodworth, who is in charge the program: quality, variety and ‘appropriateness to the site.’
Patrick Carey/MTA
Previous Next
Posted Wednesday, July 20, 2022 12:58 pm
BY SHIHAO FENG

Following his arrest last month in Herald Square on charges that he was obstructing foot traffic, the saxophonist known as JazzAjilo, who performs while fronted by a dancing band of animatronic animal figurines, started a GoFundMe page. One of the more popular musicians who ply their trade underground, Ajilo had collected nearly $120,000 as of July 19. He said the funds would help pay for his legal defense and provide for lost income.

Mayor Eric Adams defended the arrest, saying the subway was an “out of control system,” and  suggested that busking was a part of the disorder. “Transit has rules, and the officers are going to do it in a professional, courteous manner,” said Adams, who patrolled the subway early in his NYPD tenure.

‘A piece of metal’

Natalia 'Saw Lady' Paruz, who has been playing a musical saw in the subway for 27 years, doesn’t share Adams’ sentiments. “We try to foster a sense of community to bring people together, to make them not be scared in the subway,” said Paruz, adding that buskers are doing the opposite of “turning the subway into an alienating, unfriendly, and cold place.”

In fact, despite the instruments of her trade, her playing tone is warm and inviting. Singing saw in her left hand, and bow in her right, Paruz adds dramatic movements that change her instrument’s pitch, her rich facial expressions telling a corresponding story. “It's like a dance,” she said.

Paruz, 45, a former dancer whose career in that art form was cut short after she was hit by a car, has played the saw with the Israel Philharmonic Orchestra; the Manhattan Chamber Orchestra; at Lincoln Center’s Avery Fisher Hall with PDQ Bach composer Peter Schickele; and at the Spoleto Festival.

Paruz describes her instrument as “a piece of metal that actually sounds like a soprano opera singer who sings without words.” Her song and technique has stopped many a commuter.

“Sometimes people stand next to me and talk between themselves, ‘oh, she’s faking it’,” she said.

Paruz, who lives in Astoria, likes to play underground for several reasons. Among the main ones are the acoustics: The structure of the subway is a natural resonating box. Depending on the day, she will be at Grand Central or Times Square or in one of the Q lines newer stations on the Upper East Side.

But she’s had to pay her way, too. Early on in her underground tenure, she was given a $125 citation by officers who thought the saw could be used as a weapon. She remedied any future such suggestion by trimming the blade’s teeth. In 1994, she auditioned and was accepted into the Music Under New York program, the longtime MTA initiative that designates time slots and sites in the system for a few select performers.

Each year, the MTA receives hundreds of applications for a few dozen auditions, held at Grand Central. A jury of music professionals, subway employees, the public and other musicians select fewer than 30 artists who will eventually get official performance slots.

“We have really three criteria: quality, variety and then appropriateness to the site,” said Sandra Bloodworth, the director of MTA’s Arts & Design department, who is also in charge of its Music Under New York program.

But, she added, anybody “can go right now and play in the subway” — as long as they obey a set of rules of conduct, all of which are published on the MTA website.

As a freelancer, Paruz had to follow those, generally to a T. And she had to ferret out performance spots not occupied by other artists where she could also attract an audience, and make something of a living too .

After successfully auditioning for the Music Under New York program, the gigging got easier, especially since she could get dibs on a place to play, according to a schedule provided by MTA.“After I've gotten into Music Under New York, then I realized what a huge privilege it is,” she said.

Felipe Pavani, who auditioned into the program a few years ago, has a decidedly different aesthetic than Paruz, but he’s no less of an attraction.

Last month in Times Square, a crowd gathered around Pavani and his Fender Strat as he belted out Queen’s “We Are The Champions.” The station’s mezzanine echoed as his audience, many just back from the Pride Parade, rainbow flags in hand, sang along with the rock anthem’s chorus.

Pavani, who immigrated from Brazil in 2015, honed his performance in Newark’s Ironbound, where he played bars and restaurants. Two years later, he won a slot in the Music Under New York program.

“When I came to the United States, it was my main goal to play in the subway in New York City and make some money,” he said. It’s his main gig and he performs at least three times a week, for at least three hours each time. On a good day, Pavani can make more than $1,000 from a three- to four-hour gig. After paying his expenses, he has income left over that he sends to his two daughters in Brazil.

His performances often attract sizable crowds. “The repertoire is the main thing,” said Pavani, “I usually play the best songs of the best bands.”

If his English-speaking skills call for a little honing, his singing skills demand no such thing. The two songs he played at his MUNY audition, Journey’s “Don’t Stop Believin’” and Kings of Leon’s “Use Somebody” remain staples, and crowd favorites.

Pavani’s rock music references built a bridge between himself and subway riders from all over the world.

“When I sing, I just look around and catch ‘what you guys want to hear?’” he said.

But after all, “it's a lot of work,” said Pavani, who drives in from New Jersey.

Still, the MTA officials noted his growing audiences and gave him the chance to apply for slots in Times Square — The Crossroads of the World — and choice playing times.

“People are not prepared for music,” said Pavani. “When they stop and watch me, smile, laugh, and give me a tip, I'm very grateful for that, because my work is recognized.”

The pandemic is a come-down

But just about like it did for everything else, Covid brought the music to a stop. Music Under New York program returned last summer. But those roughly 18 months were a bust for the vast majority of subway buskers. Pavani moved south, to Orlando, joining up with a Brazilian community in that Florida city as it reopened much earlier than New York City eventually would.

For her part, Paruz, the Saw Lady, performed via Zoom or Facebook, taught the instrument and put out a pandemic-era record. The musicians returned, not only uncertain of the public reception and even whether there would be one, but also wary given the virus’s continuing hold. Regardless, the performing climate has also shifted noticeably, Pavani said.

“People are more angry, and sometimes sensitive, and cautious. It’s very weird,” he said. “I'm not sure how things are going.”

Earlier this year, a man approached Pavani, and told him he wanted to sing along. When Pavani declined, the man pulled a knife on him. The performer called police, who arrested the man. Pavani was unhurt, but he is significantly more vigilant now.

“You have to stay alert all the time,” said Pavani, adding that he hadn’t encountered anything similar before the pandemic.

“It's half the amount of people that used to be,” she said. And there are other issues. More than before, the stations act as shelters for those without permanent housing. Some have mental-health issues; others harass her audiences; a few are downright violent.

She stayed away from the subway for a whole month.

Other than that, there are a host of reasons why busking is not as lucrative as it once was. Among them are cellphones and their personal playlists on streaming platforms. And who buys CDs anymore?

The fact that the audiences nowadays prefer taking videos also affected their interactions with performers. “A lot of people watch the phone and then just walk away. They don't even smile, not to mention give donations.”

Despite all that, Paruz said the pandemic brought home to her how much she enjoys playing underground.

“Busking in the subway is not a job,” she said. “It's not a career or occupation. It is a vocation.”