Is Adams’ Medicare Advantage ploy ‘a game of chicken?’ 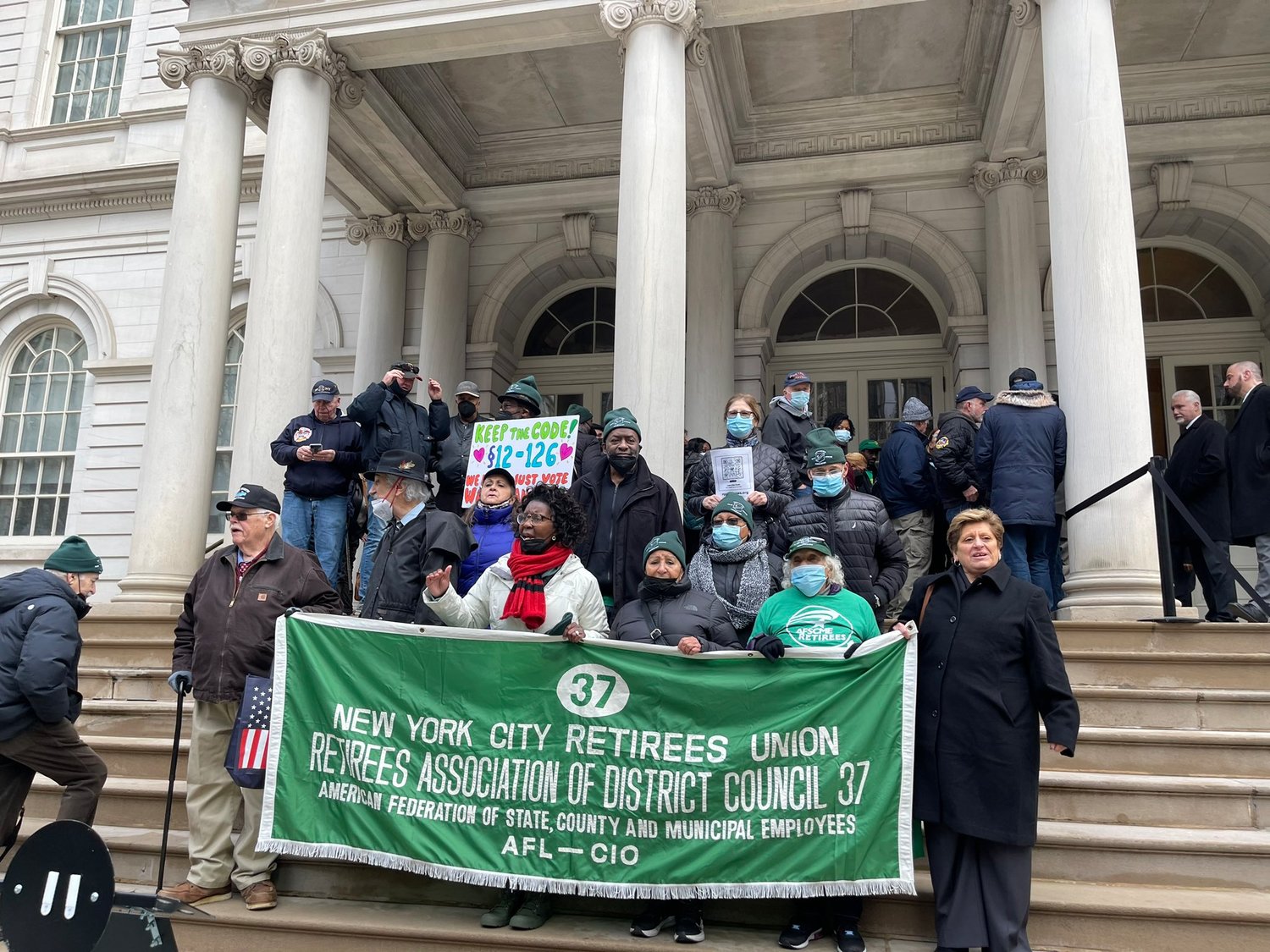 Retired municipal workers gathered on the steps of City Hall Monday ahead of a City Council hearing on proposed legislation by the Adams administration that would have retirees pay for a portion of their health insurance.
Courtesy of Council Member Joann Ariola
Posted Friday, January 13, 2023 12:00 am
BY MARC KAGAN

About midway through Monday’s City Council hearing on Mayor Eric Adams’s demand that a Medicare Advantage plan become the only no-premium healthcare option for municipal retirees, Council Member Lincoln Restler (D-Greenpoint) pondered out loud, “Is this all a game of chicken?” He was referring not just to the high stakes of this “game,” but the way retirees are being told that if they don’t swerve now — stop fighting, and accept the diminishment of their health benefits as inevitable — they will lose all chance to buy (at upwards of $2500 a year) their current, and better, medical plan.

Adams’s cynical attempt to load the dice so that they always come up snake eyes for retirees was evident in the pleas of a handful of cancer victims so desperate to stay out of Medicare Advantage that they demanded Council members change the law so they could pay for the Medicare/Senior Care plan they currently get for free.

Yet hundreds of other retirees urged the Council not to blink in this showdown with Adams. And one union put forward its own plan to preserve the current health benefit system for up to three years, giving the city, unions and retirees a chance to build a better mousetrap.

Many readers of The Chief are no doubt already familiar with the bare bones of Adams’s attempt to strip retirees of existing health benefits. It started a decade ago, when the United Federation of Teachers convinced the Municipal Labor Committee (where it is a heavyweight, since votes are weighted by membership numbers) to raid the city’s Health Stabilization Fund to partially fund a contract.

The MLC also committed to find medical cost savings at each contract round. At first, these were relatively painless: purging the rolls of ineligibles. Then came increased deductibles and copays. And now, in what some bookkeeper must have thought was a clever idea, Adams wants to shift 65-and-over retirees from their traditional Medicare/Senior Care plan (for which the city covers supplemental costs) to a Medicare Advantage setup, where the Feds would effectively pick up the costs. The savings amount to about $600 million a year. That seems like a lot until you consider it’s just 5 percent of all municipal employee health-care costs. It’s also far less than the $1 billion in annual costs Adams apparently sees no political benefit in trying to recoup from religious school-special education scams.

Oh, and by the way, these Medicare Advantage plans provide worse health care — fewer doctors participate in them, and the insurance companies that run them bulk up their profits by denying expensive medical procedures. They make sick retirees jump through hoops precisely when their medical conditions make this most torturous. No wonder retirees, and retiree organizations, have been up in arms. Using the courts, and pointing to current provisions of the city administrative code that effectively block the city from charging for the existing plan, they have so far prevented the city from implementing its plan. A judge told Adams he could provide a Medicare Advantage plan and try to entice retirees into it. Except, of course, Adams knows there would be few takers.

So, lacking a carrot, Adams has gotten out the stick. That’s what led him to the City Council, which he has enlisted to change existing law so as to allow the city to charge for Medicare/Senior Care, which is currently free. If you don’t give up resistance, he thunders (at retirees and the Council), I’ll simply abolish all alternative plans, at any price. You’ll be stuck with Medicare Advantage. Hence, Restler’s “game of chicken.”

Ominously, Adams’ proposed amendment will also open the door to major changes for current municipal employees. City law now mandates a single free “base” plan — the Emblem plan — to which upwards of 70 percent of all active workers belong. That plan’s benefits and costs are negotiated between the City and the MLC. But Adams’s proposal would open the way for multiple “free” plans — in theory, one for every union. That’s dangerous. Some unions will be tempted to cut health-care costs and benefits to fix a big problem — say, a work rule it desperately needs changed, or a membership rumbling about low pay. My old union, TWU Local 100, did that in 1999, creating such a crisis that a new union leadership had to agree to a subsequent wage freeze to set things right. By then, the people who had caused the problem were sunning themselves on sandy shores — except for the ones that went to work for management!

Unfortunately, most of the bigger municipal unions have become Adams’s cheerleaders in this ploy, afraid he will simply refuse to negotiate new contracts — like Mike Bloomberg did during his third term. Most retirees, after all, do not have the right to vote in union elections. It turns out they are dispensable. They tell retirees the Medicare Advantage plan is really, really good. They tell actives that retirees are to blame if they don’t get raises. Of course, even if they are successful in helping Adams twist the Council’s arm, this is just a temporary solution. In three years, they will be looking for another way to cut benefits, another pool of victims, perhaps new hires, or people with high prescription costs, or lots of dependents.

One union, though, has rejected this blame game and put forward an ambitious alternative plan. The Professional Staff Congress, which represents faculty and staff at CUNY, told the Council that Adams, like Bloomberg and de Blasio before him, could temporarily draw on reserves the city holds in what is mysteriously called the Retiree Health Benefit Trust, but which is essentially a rainy-day fund. That fund currently has over $8 billion in it.

The PSC proposes that the fund’s assets be used to preserve the current Medicare/Senior Care plan for three years. During that time, stakeholders — the City, the unions and retiree groups, and perhaps even insurance companies and hospital systems — could then develop a new, more sustainable method of paying for health care. Largely, the PSC’s proposal suggests using the city’s tremendous bargaining power to drive down hospital systems’ exorbitant charges and cut insurance company profits. There’s of course no certainty this would work, but the ticking clock would at least create political pressure to overturn the unacceptable status quo in which health-care costs continue to spiral out of sight.

Eighty years ago, Mayor Fiorello La Guardia created the nation’s first municipal public-private healthcare initiative — what we now know as HIP. With the growth of hospital and insurance giants, that model no longer works. But who’s to say that we can’t be just as bold and foresighted as he was, if we put our collective minds to the problem?

Marc Kagan is a PSC delegate and adjunct lecturer.