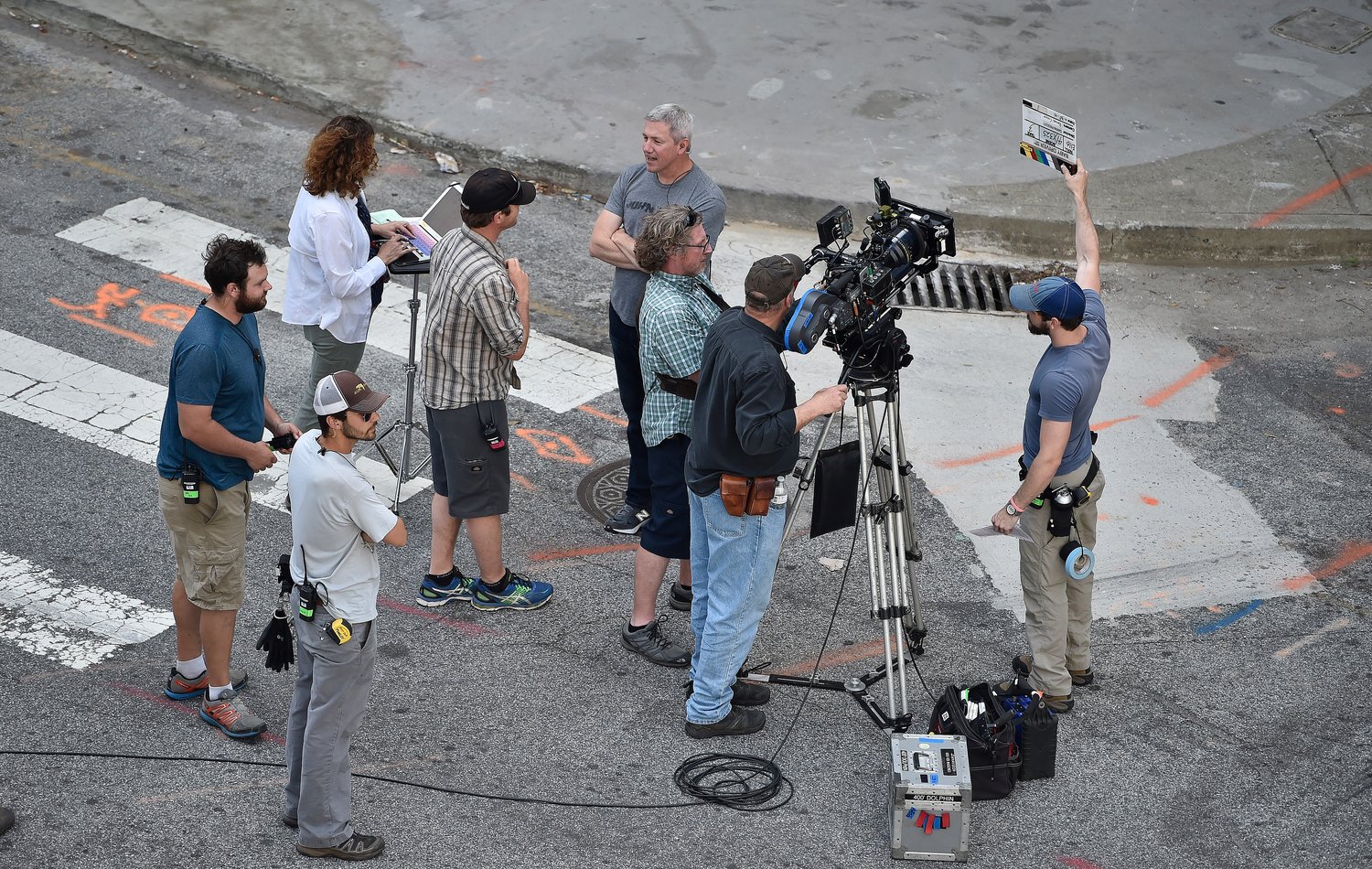 THAT'S A WRAP: The International Alliance of Theatrical State Employees created some Hollywood drama by using a strike threat to win a contract that, if ratified by its 60,000 members in the film industry out there, would offer major improvements in working conditions and annual 3-percent raises over three years. Above, a movie-production crew working in downtown Atlanta in 2016.

A contract deal between the union representing off-camera movie-industry employees from camera operators to writers' assistants and the Hollywood studios that offers significant improvements in both wages and working conditions was hailed by several union officials as a breakthrough, including Roberta Reardon, a former entertainment-union leader who is now New York's Labor Commissioner.

"It's a big contract and a national contract in a very visible industry, and it has to help everyone in labor," she said during an Oct. 22 phone interview.

The deal was reached late on the night of Oct. 16, less than 48 hours before members of the International Alliance of Theatrical Stage Employees were set to walk off their jobs after previously voting overwhelmingly to authorize a strike.

While specific terms were not spelled out by the union in many cases, the three-year deal would provide annual 3-percent raises and what it characterized as "a living wage for the lowest -paid earners," and improved wages and job conditions for streamed productions, which run a full hour because there are no commercial breaks.

It also would contain increased penalties against the studios for employees missed meal periods and a minimum rest of 10 hours from the time workers leave a movie set and when they are required to return.

That was a particularly important condition because film shoots sometimes last as long as 18 hours. There will be a weekend rest period of 54 hours in the same framework.

If ratified by the 60,000 affected IATSE members, the agreement would be expected to serve as a pattern for the union's 90,000 other members in the U.S. and Canada.

IATSE International President Matthew Loeb could not be reached for comment, but he released a statement saying, "This is a Hollywood ending. Our members stood firm."

Ms. Reardon said while she did not know the full terms of the tentative pact, "From what I can see, it looks like a really solid deal. This was really critical for workers, and I congratulate President Loeb and his team."

She has a unique perspective on the negotiations, having served as president of the American Federation of Television and Radio Artist from 2007 to 2012, then as co-founding president of SAG-AFTRA, following the latter union's merger with the Screen Actors Guild before stepping down in 2013. Earlier in her career as a union activist, she was part of a six-month strike by AFTRA in 2000.

"It was brutal," she recalled. "Actors are not used to being out of work for that long...It solidified the membership in interesting ways."

Ms. Reardon said the solidarity among IATSE members had been evident when 90 percent of them took part in the strike-authorization vote, a turnout that delivered a clear message to the studios. "I was so impressed by that and the way they stuck together," she said.

She was particularly impressed that the deal would upgrade pay for the lowest-paid union members, who she said were currently earning not much above minimum wage, to $26 an hour if ratified. Saying that amounted to a 62-percent hike, she added, "That is truly amazing, and that's what unions are for."

Noting that the movie industry is a major source of revenue for the state, Ms. Reardon said that Governor Hochul had sent a congratulatory note to union officials.

Asked what the impact of the deal would be for both public- and private-sector employees at a time of renewed militancy among private-sector unions, she replied, "It seems like workers may have more to say in their terms and conditions of employment than they have for a while."

The New York Times reported that studio executives had believed IATSE would not risk a strike, with some pointing out it had never conducted a serious walkout in its 128-year history. The fact that it didn't have a strike fund to help sustain members while they were on the picket lines, and those workers were already financially hurting because production had shut down to a large degree during the pandemic, seemed to further tip the scales against their taking drastic action.

Something in the Air

But recent strikes in other industries and in other parts of the nation, as well as the reality that if the 60,000 IATSE members who work for the studios had gone out, the national strike authorization vote meant they would have been joined by the union's other members here and in Canada, strengthened the Hollywood workers' hand and their resolve, according to Vincent Alvarez, president of the AFL-CIO New York City Central Labor Council.

"I think all these things factored into it," the head of the umbrella group for the city's public- and private-sector unions said in an Oct. 19 phone interview. "UAW, the Kellogg bakers' strike, John Deere," referring to three recent job actions that have attracted attention and created a sense that labor has entered a more-militant phase of its history.

"The IATSE negotiations were taking place at a time when workers around the nation are fed up," Mr. Alvarez continued. "They've been through the pandemic, they're frustrated." He also noted that a Gallup poll earlier this year showed that public support for unions was the highest it's been since the 1960s.

"The successful outcome of the IATSE near-strike adds to the momentum in the workplaces for achieving the goals, wages and benefits they've been on the picket line for, and in this case were able to achieve," the CLC President said.

"It sounds like a good deal," said a veteran union negotiator who spoke conditioned on anonymity. "I don't know what the studios got, except for labor peace," in return for granting improvements in working conditions that had long been sought by IATSE.

As one example of just how much ground those union members had to make up, he noted that the union was hailing having gained Martin Luther King Jr.'s birthday as a paid holiday. Most city and private-sector unions in New York obtained that benefit by the mid-1980s, and he noted that Local 1199 of the Service Employees International Union, which represents more than 200,000 health-care workers in the New York area, "just got Juneteenth" as a paid holiday in its recent contract deal.

He added that, as much of a negative effect as the pandemic has had on the lives of working people in particular,  "COVID's having a dividend for a lot of unions. It's hard to take the position of [bleep] the workers, because of what everyone's been going through. A strike wouldn't have looked good for Hollywood."

Governor signs off on mayoral control of schools

For some, the office is a faraway place