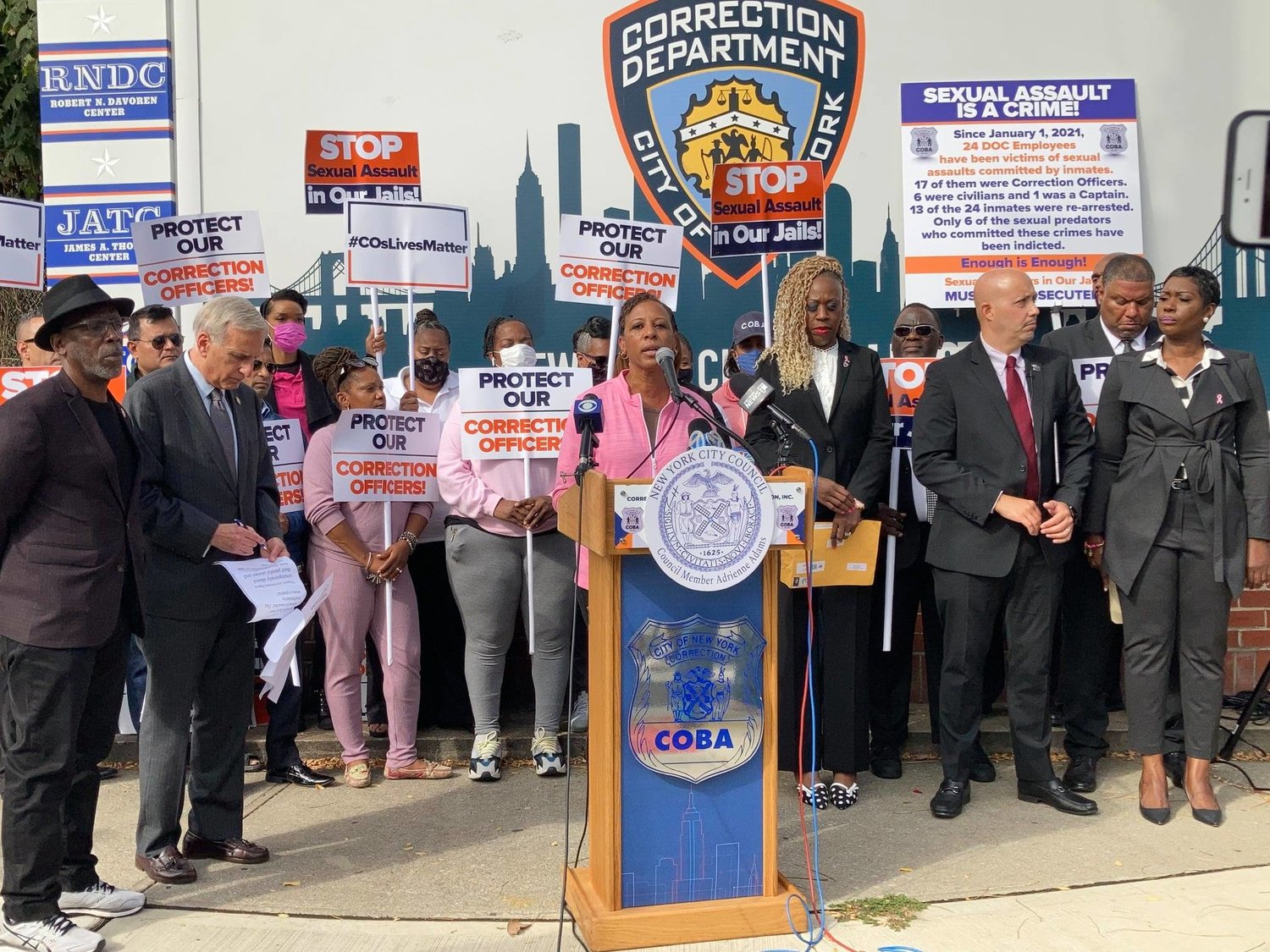 PUNISHMENT TO FIT THE CRIME: State legislation pushed for by the then-Chair of the City Council’s Public Safety Committee and now Council Speaker, Adrienne Adams, at lectern, would increase penalties for sexual harassment and other sex crimes committed against city correction officers. Ms. Adams, shown at an October rally addressing the issue, said the matter was a personal one: Her mother retired as a Captain after nearly 20 years with the Department of Correction.

City female correction officers are hopeful that recently introduced state legislation will provide a measure of deterrence and reduce incidents of sexual harassment and other crimes by inmates.

Bills in both houses in Albany would amend the penal law and increase the potential punishment for many forms of sexual assault inside city jails. The legislation would also make it a felony for a person to forcibly touch an officer’s intimate parts in a degrading manner or for sexual gratification, with punishment increasing to a possible four-year jail stint—on top of any current sentence.

There have been 22 incidents of sexual assault since January 2021, according to the Correction Officers' Benevolent Association. The vast majority of officers who were sexually assaulted were women, but at least one male was subjected to sexual abuse by a detainee last year. Another five female civilian staff members also reported being sexually assaulted. Only about a half-dozen of the incidents resulted in an indictment.

But soon after their elections to the COBA board in July 2020, three female Correction Officers promised themselves to do what they could to ensure that women who worked on Rikers Island daily would be protected, said Ashaki Antoine, the union’s first female citywide trustee.

“There was no real sense of urgency,” she said of the prevailing sentiment within the Department of Correction at the time. “No one cared, male or female. No one cared.”

Soon after Vincent Schiraldi was appointed Correction Commissioner in May 2021, following discussions with him, they approached state legislators and some in the City Council with their concerns. Many were receptive, the three Officers said.

Keisha Williams, a 22-year CO and the union’s third vice president, said the level of harassment and assault was akin to a silent epidemic. “The outside public didn’t have any clue that this was going on on Rikers Island,” she said. “We had to push to make our voices heard.”

Sexual harassment and assaults on female officers, who make up very nearly half of DOC’s uniformed staff, started to go up about the same time as overall violence inside the jails was increasing.

Leadership and supervisors—most of them—discouraged the officers from speaking up. “They didn’t deem it a priority,” said Ms. Antoine, an 18-year CO. “Most times when our female officers would come forward, [management] would basically ignore or act like it was business as usual.”

Ms. Williams said the prevailing philosophy at DOC was keep the peace. “Everyone just wants to have a quiet day, so they will appease the inmates,” she said.

During an October event outside of the Rikers Island jail complex at which she introduced legislation asking state lawmakers to take up the bills, the then-Chair of the City Council’s Public Safety Committee, Adrienne Adams, said the issues of sexual harassment and assault on officers had to that point been “overlooked by those in authority.”

“No one should have to go to work thinking or knowing that they may be sexually abused or sexually harassed or sexually assaulted in the course of their workday,” Ms. Adams, now the Council’s Speaker, said at the time.

Personal Issue for Her

She said the issue was a personal one: her mother retired as DOC Captain after a nearly 20-year career. After being approached by the COBA trustees, “I knew that I had to do something. Something has to change, because corrections officers have been through enough,” she said.

The state bills also increase penalties for rape by, for instance, boosting third-degree rape from a Class E felony, punishable by a maximum of four years behind bars, to a Class D, punishable by up to seven years.

“These increased penalties will send a clear message that sexual assault and abuse of correction officers are unacceptable and will have serious consequences,” Ms. Adams said in October.

The three Officers said newly appointed Commissioner Louis Molina has been supportive, ensuring that reports of sexual harassment and other crimes are investigated and holding managers accountable.

Officer Anderson said she was optimistic the prospect of additional punishment would have a bearing on behavior. “Crime doesn't stop because they’re locked up,” she said. “Why shouldn’t they be charged and held accountable for their actions?”