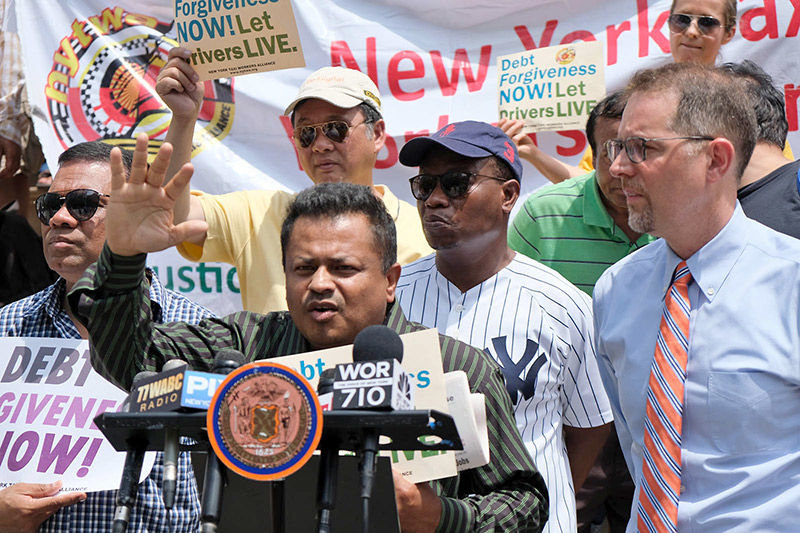 Under a proposal backed by some City Council members, the city would purchase at a steep discount hundreds of millions of dollars in taxi-medallion mortgages and refinance them at an affordable rate for cab owners victimized by predatory lending.

At a July 11 City Hall rally of the New York Taxi Workers Alliance, Council Member Mark Levine said the city had a moral obligation to help the cab drivers because it had collected close to $1 billion in revenue from the sale of the medallions when officials secretly knew they were not worth what it and private brokers were selling them for.

For years, the New York Taxi Workers Alliance warned that even as the Taxi and Limousine Commission raised the price of a medallion, which gives its owner exclusive rights to pick up fares on city streets, the advent of the ride-hailing services Uber and Lyft had decimated revenues and collapsed the value of medallions.

“The crisis that you are living through right now has in part been perpetrated by New York City’s government itself, which pumped up the bubble which has burdened you and thousands of drivers with impossible debt loads that has destroyed your financial livelihood—destroying families and in a heartbreaking number of cases has led to suicides among your colleagues,” Mr. Levine said.

As early as 2004, Bhairavi Desai, co-founder and executive director of the New York Taxi Workers Alliance, pleaded with elected officials to pay attention to her members’ plight. Following several driver suicides, a New York Times probe uncovered the role of city officials in helping to stoke a medallion market that fed a massive predatory loan scheme that ensnared thousands.

The Times investigation found that even as the city continued to market new taxi medallions, “a handful of taxi industry leaders artificially inflated medallion prices and made hundreds of millions of dollars by channeling immigrant buyers into reckless loans.”

As a consequence, the Times reported, prices spiked to $1 million in 2014, up from $200,000 in 2002, as local credit unions “adopted tactics similar to those in the housing crash, issuing loans with exploitative terms to low-income drivers who could not afford them.”

Close to 1,000 medallion owners went bankrupt while others struggled to stay current on loan installments that far outstripped their income from driving. Many faced foreclosures and evictions as a consequence.

“We have done a study of the outstanding debt, and what we have seen is the average outstanding debt is $600,000,” Ms. Desai said at the City Hall rally. “The average monthly payment is close to $3,000 and each owner/driver family is ending the year in the negative by $28,000 because what they are making on the meter is going straight back to pay that loan.”

Ms. Desai said the NYTWA estimates the real value of a city taxi medallion is between $150,000 to $200,000 and that driver/operators could afford a $900 a month payment to keep current on a medallion mortgage that reflected that real market value

At a June 24 hearing, Council Member Ritchie Torres, who chairs the Oversight Committee said he had received an internal memo written by a city official that documented that as early as 2010 and early 2011 the Bloomberg Administration was aware that medallion prices could crumple.

“The collapse of the medallion market, properly understood, should be remembered as one of the greatest government scandals in the history of New York City,” Mr. Torres said at the hearing. “The medallion market collapse is a cautionary tale of what happens when both government and markets are governed not by laws but by greed.”