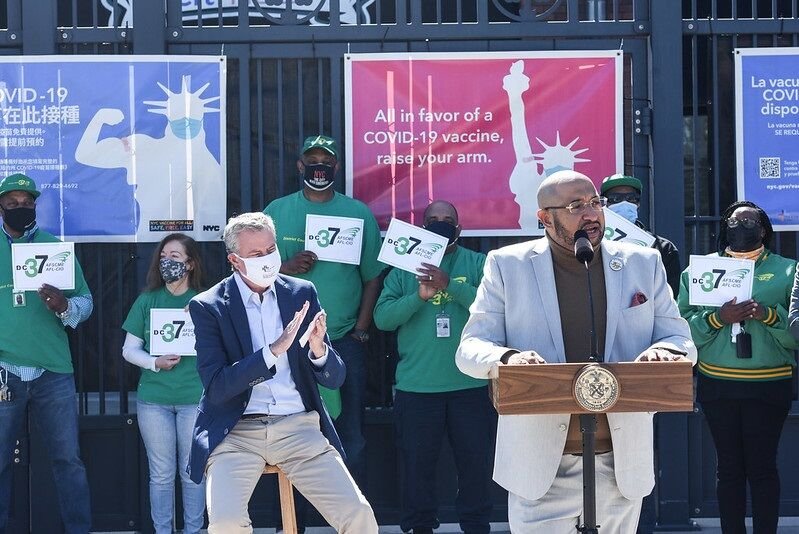 TAKE IT OR LEAVE: District Council 37, along with eight other unions, reached an agreement Nov. 4 with the city detailing leave policies for municipal workers who have refused to get the coronavirus vaccine. Unvaccinated employees who do not receive an exemption will be able to extend their unpaid leave through June 30, 2022 and retain their health benefits, or can be reimbursed for sick days if they leave the job by Nov. 17.

The pact allows employees who apply for a medical or religious exemption between Nov. 3 and Nov. 5 to remain on payroll—while also receiving weekly COVID testing—until they receive a decision from their agency. Those who are denied an exemption will have three days to appeal, but they “may be placed on unpaid leave for the appeal process,” the agreement states.

Employees who applied for an accommodation prior to Nov. 3 will remain on payroll during both the decision-making and appeals process.

City workers who submit a request for an accommodation after Nov. 5 will be placed on leave without pay while their employer decides whether to approve their exemption. If their request is subsequently granted, they will be eligible for retroactive pay.

Staff who have not received an exemption or showed proof of vaccination will be placed on leave from Nov. 1 to Nov. 30, and will not be allowed to look for another job during that period.

Employees who have been placed on unpaid leave who choose to leave their jobs before Nov. 17 will be reimbursed for up to 100 days of unused sick leave and will remain eligible for health benefits through June 30, 2022. Employees currently on unpaid leave between Nov. 17 and Nov. 30 can also choose to extend their leave without pay through June 30, 2022 and retain their health benefits.

The policies apply to 88,000 city workers represented by those unions who do not work for the Department of Education or NYC Health + Hospitals.

Mayor de Blasio thanked the unions for working with his administration “to keep New Yorkers safe.”

“Vaccinations are critical to our recovery and our city workforce is leading the way,” he said. “[Ninety-two] percent of city employees have stepped up and gotten vaccinated, and this agreement ensures a fair process for those seeking exemptions.”

Labor Commissioner Renee Campion said that she looked forward to continuing discussions with other municipal unions.

“We are proud to have negotiated collective-bargaining agreements with several unions regarding the vaccination mandate, which provide a process for our employees to request medical or religious exemptions and establish rules for employees on leave without pay,” she stated.

Attempts from unions to fight against vaccine mandates in court have been largely unsuccessful. Although 92 percent of city workers have been inoculated, 9,000 city employees have refused to get vaccinated since the Oct. 29 mandate was imposed.

“Individuals can now make choices based on what is best for them and their families and know they will have health benefits available during this critical time,” he said.