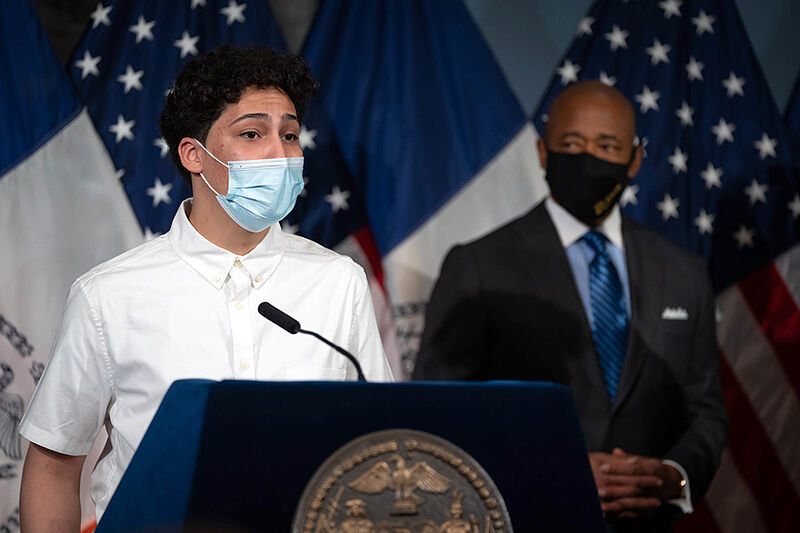 ONE OF 100,000 STORIES: High-school senior Jacob Montanez, at an announcement by Mayor Adams that the city's Summer Youth Employment Program will offer a record 100,000 jobs, said his position last year as an instructor at a summer camp helped develop skills like computer coding that will prepare him for a career in engineering, and the money he saved will go toward his college expenses.

Mayor Adams and City Council Speaker Adrienne Adams have reached an agreement to fund a universal Summer Youth Employment Program that will offer 100,000 jobs to those aged 14-to-24.

Under the deal announced at a joint press conference on Feb. 15, the city will commit $79 million to fund those positions, with 90,000 being offered through the city's Department of Youth and Community Development and 10,000 though other city programs.

'Everyone Who Wants It'

That will be the most summer jobs offered in the 60-year history of the program, which has traditionally been a Council priority hashed out in budget negotiations with the Mayor.

"Every young person that wants a job, needs a job," Mr. Adams told reporters. "We are also going to put [in place] some type of online financial literacy course as part of the summer youth program, because we have to come up with one solution to solve a multitude of problems. These young persons may earn extra cash over the summer [but] if they don't understand the value of that, we are failing."

The summer-jobs program is part of a multi-faceted strategy the Mayor is pursuing to reduce gun violence while closing an educational-achievement gap for young people of color that experts worry has gotten more- pronounced during the pandemic.

Speaker Adams said, "Expanding these opportunities for young people is critical to our shared goal of creating strong and safe communities. These types of investments are essential to address and prevent the violence that our city and many other cities across the nation are facing."

In the past, the summer youth-jobs program, administered through DYCD, relied on a lottery system because the demand far exceeded the number of available positions.

Multiple studies have linked summer employment to improved socio-economic outcomes for program participants by boosting their levels of educational achievement and lifetime earnings.

The announcement came as social scientists sounded alarms about a dramatic spike nationally of disconnected teens and young adults who are neither in school nor employed. The city has seen a significant spike in gun violence that involved children and teens with those shootings doubling from 2019 to 2020, mirroring a national trend.

According to the Social Science Research Council's Measure of America report, due to the move to remote schooling May 2020, in the early months of the pandemic "as many as nine million young people were out of school and out of work, more than as twice as many as in 2019."

Affects Poorest the Most

The think tank warned that "young people with the fewest resources" would "be left further behind their peers and face the highest bars to reconnection. While it is clear that young people of all stripes will suffer, low-income people of color will be the hardest hit."

"A 2021 study found that SYEP participation lowers participants' chances of being arrested that summer by 17 percent, and by 23 percent for felony arrests," according to a City Hall fact sheet. "Other research has found that SYEP youth are significantly less likely to be incarcerated in New York State more than five years after their participation in the program."

"For New York City's young people, the summer employment program is a critical opportunity to develop the experience and skills they'll need to become successful in work and in life," said Vincent Alvarez, president of the AFL-CIO New York City Central Labor Council, which has long assisted the program. "But this is more than just an investment in our youths, it's an investment in the workforce that will drive our city's success for decades to come."

Youth and Development Commissioner Bill Chong said last year the city engaged 114,000 young applicants to fill 75,000 available positions. He added that it was a city summer job working on "a neighborhood beautification project on the Lower East Side in 1973" where he earned $320 that gave him "the work and life skills to pursue a four-decade career in public service. I am living proof of the power of a first job."

In addition to positions with city agencies, program participants will be placed in non-profit and private sector jobs.

Kenneth Gibbs, the president and CEO with Maimonides Medical Center, the largest non-governmental employer in Brooklyn, cheered the expansion of the program.

"We love this program," he told reporters. "We have 4,000 alums of this program. Many of them worked for us. Some have gone on to med school. They have entered the economy."

"Mayor Adams is correctly focused on maximizing summer work experience for young people who have been largely denied this opportunity during the pandemic," said Kathryn Wylde, president and CEO of the Partnership for New York City.