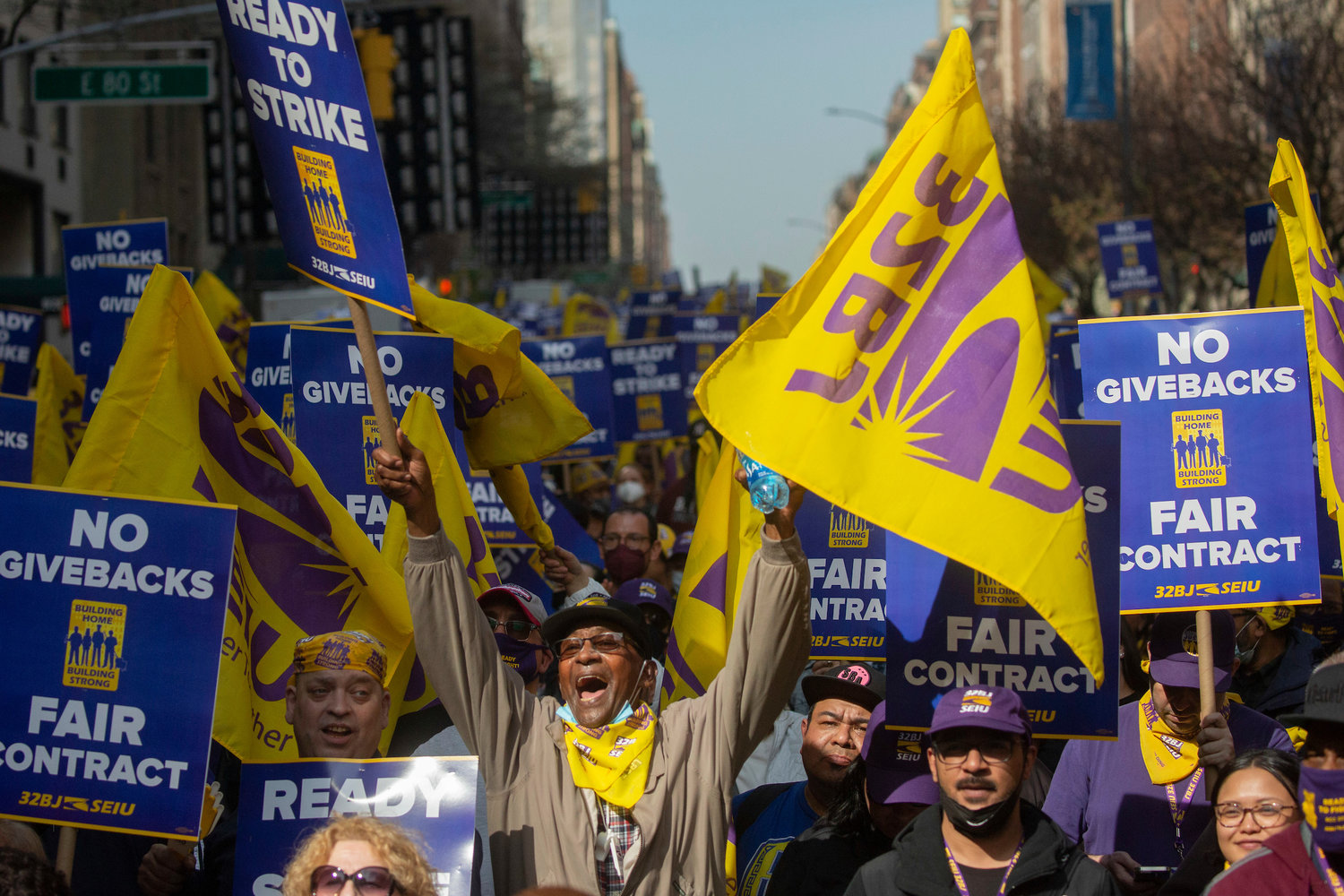 Should the city’s 32,000 doorpersons, porters, supers, concierges and other employees of 32BJ SEIU go on strike April 20, it would be building workers’ first in a generation. Above, some of the 10,000 who rallied in support of a new contract.
Photo courtesy of 32BJ SEIU
Posted Tuesday, April 19, 2022 7:23 pm
BY RON ISAAC

Many years ago, when I was an underachieving, neurotic teenager bursting with urban angst and  an insatiable urge to prove myself in any way I could, as long as the goal was elusive and indefinable, my parents sent me to a Park Avenue psychiatrist because I was failing all my subjects.

As I arrived for my appointment, I witnessed one of the lucre-flushed residents, returning from her promenade with her non-shelter dog, deliberately drop the leash a few yards away for the doorman to pick up, because that was her accustomed style and she was raised in the virtue of giving attendants some task to keep them busy (and make their lives worthwhile).

In session with my therapist, (who owned a sprawling estate that dwarfed Sandringham), I mentioned that I felt badly for the doorman being treated like a servant even by the small children of the tenants.

This doctor who was used to being daunted by the challenge of persuading me that destiny wasn't conspiring against me, reassured me, but instead of resonating, her soothing misfired.

She said, in effect, that the doorman was being done a favor, because his chores were a gift that gave him a sense of purpose and his mandatory uniform conferred pride in appearance.

In addition, the requirement that he remain standing at all times, even when alone on duty, was wholesome, because, in concert with menial and subservient chores, it gave him essential practice in self-discipline.

Although it didn't qualify me for post-traumatic stress syndrome, the memory still jolts me.

In my head, I estimated what the disparity is between the earned income of a doorman and the average occupant of those lavish suites. He'd have to toil around-the clock while the gilded napped for a hundred generations to make up the difference.

Of course, it wasn't just about money. It was also an insidious phenomenon called status.

Even in adolescence I conceded the practical limitations of a quest for economic justice. We must realistically make concessions to greed and other aspects of the seamy side of human nature. Economic supremacy depends on it.

Most people covet it, at least immediately prior to and after attending religious services, during which they often undergo a faux divine humility.

But we tend to keep the engine of material striving well-oiled. The Ten Commandments are not part of the 9-to-5 machine.

A Romantic poet, probably dropped from the curriculum for being a classic, said that the child is father to the man. The precocious sympathies of my youth haven't changed. They've kept me from aging.

I still look up and don't talk down to the people who do the work in this world, not the venture profiteers and dividend surfers.

Moral imperatives should make activists of us all.

And so we must support the more than 30,000 doormen and other building employees of 32BJ SEIU in their righteous efforts to avoid a strike on April 20. It would be the first one in a generation.

Threatening an amicable outcome of negotiations is the Realty Advisory Board on Labor Relations (RAB), the landlords' advocate, which is adamant about slashing the workers' vacation and sick time and wiping out terms of their long-established health benefits.

The workers’ demands are not excessive. They are indeed modest. Basically they want to keep pace with inflation and protect what they have. The staggering aggregate wealth of the luxury apartment dwellers, which could probably underwrite the International Space Station for the rest of this century, could breezily fund it.

The souls who facilitate the opulence of Easy Street should not be begrudged the wherewithal to make ends meet for their families.

In fairness to these residents, many of them are not arrogant elitists, but rather feel genuine empathy for the building employees and treat them accordingly. The actual negotiation process is out of their hands.

Nonetheless, if they volunteered their support, and if it were avid enough, it might create a climate more conducive to a fair settlement.

Have they organized and expressed solidarity for the workers?

The building management companies have issued dire warnings to residents about the draconian impact that they will endure in the event the workers have the temerity to withhold their labor. They will need to personally receive delivery of packages addressed to them and clean their own hallways, for instance.

So onerous and beneath them! These are not perks for the pampered.

The 32BJ SEIU members don't want condescension and crumbs. They seek compensation that comports with a middle-class lifestyle. Right now they are clinging tenuously to the edges. They want what is overdue them.

Their demands are neither audacious nor ambitious, and the building employees would prefer achieving them without a struggle. But if caught up in a battle that is not of their making, they will prove fit and ready warriors.

There are other labor-related skirmishes present or on the horizon in New York State that reflect piggish policies and attitudes that workers are facing.

Efficiency experts (that is, people who want to divert workers' cash to others' pockets)  from anti-union think-tanks, are bemoaning the requirement that state law dictates that contractors and subcontractors of what will be a new $1.4 billion stadium for the Buffalo Bills pay their laborers the local "prevailing rate.”

Not a good omen.

And the Manhattan Institute's Nicole Gelinas crafted an impeccably Scroogian op-ed in the New York Post, in which she, in effect, suggests that the nation that leads the free world would be better off if a high economic tide were allowed to sink, rather than lift, all boats.

Her proof is that private sector workers have contentment thrust upon them by being forced to survive lower wage packages than do their unionized brothers and sisters.

The 32BJ SEIU members are, by any estimation, on the right side of history. When they win, their victory will open doors, sooner or later, in one form or another, for all New Yorkers.

Ron Isaac is a resident of Queens.