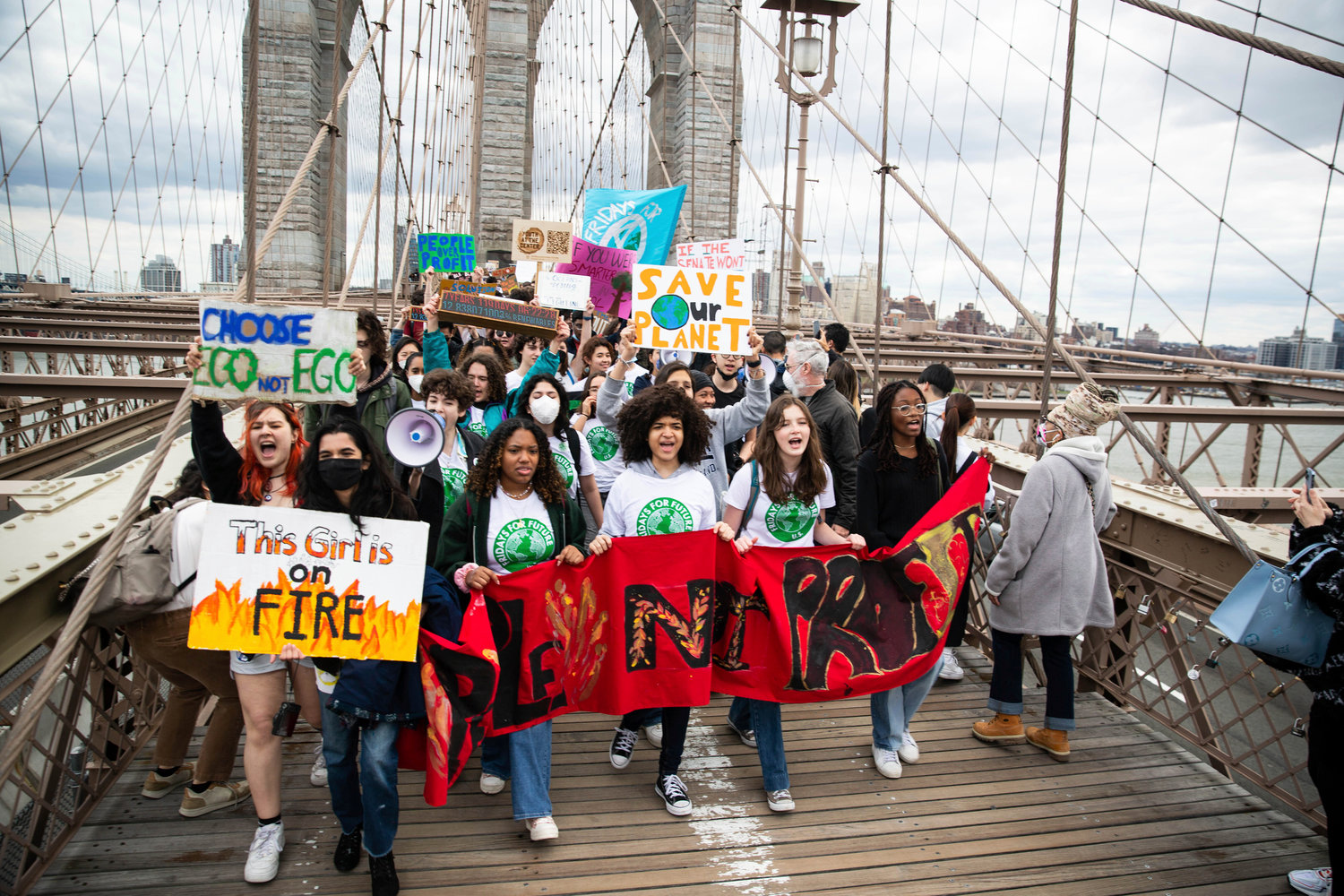 More than 1,000 young climate activists marched across the Brooklyn Bridge to Foley Square as part of a global climate strike March 25. Our columnist offers a few suggestions for summertime learning that, he argues, are just as real-world consequential as climate change.
Karla Coté/SOPA Images/Sipa USA via AP Images
Posted Tuesday, June 28, 2022 10:59 pm
BY RON ISAAC

Tell the students in your life not to sweat the small stuff, such as saving the planet.

Put the dysfunctions of the school system on the back burner of your consciousness. Flick off from your radar screens all the stubborn problems and flopped panaceas of public education.

White shoes optional. Treat yourself. Relax. But keep an eye open, because the material world is no respecter of seasons and can mug you anytime.

The world will eventually right itself  and so will our classrooms. Unless we overthink how to fix their fate.

In the meantime, at least until Labor Day, tell the young scholars in your lives to reset their knowledge-absorbing icon into either sleep or sieve mode. Purge their cache memory of valedictory advice, and their intellectual lockboxes where are stored trivia about  towering historical figures, concepts,  world-shaking and stultifying events, and most of the other lessons they endured.

Let the texts eat dust on the library stacks.

And as for us Chief readers: Don't be distracted and duped by groundless fears of "learning loss" that are stoked by tutoring agencies and others who profit from marketing doomsday education scenarios. The fading lessons of June will be refreshed in September.

No doubt before the first autumn leaf wafts to the ground, students will one again be more at risk of suspension for not using a peer's preferred pronoun than for pushing their pregnant teacher down the stairs.

The pursuit of general academics over the summer is, for the most part, an often futile and always frivolous pursuit. Our students will be fine enough.

But these are three courses that I recommend for the summer: One: “Financial Literacy.” Two: “How to Avoid Becoming an Enslaved Consumer of Products and Ideas.” Three: “How to Detect ‘Fake News’ When Generated by Both Our Friends and Foes.”

Students are often  encouraged to have an exaggerated belief in themselves. Although we shouldn't encourage self-loathing, we  must make sure there's a basis for it. Let's not teach kids that they are trailblazers when they couldn't navigate their way out of a paper bag.

Or balance a checkbook.

We can't have blind faith in their taking the reins of society and one day national decline when they can't fill out an application, maintain a budget, manage accounts, set savings goals, acquire insurances and loans, figure taxes, see through consumer scams, prioritize discretionary income, control financial risk, elude identity theft and invest responsibly for short-term needs and retirement.

This is as much the real world as climate change.

Where is the syllabus, Department of Education? It's not enough to name magnet schools to give the illusion of specialized focus.

Many states mandate financial literacy as a high school subject. Among them is Michigan, which recently passed a bipartisan bill to ensure that students become as fluent in lifelong skills as in the Pythagorean theorem.

Next on my Summer Cannot Wait Curriculum: Consumerism.

Advertising, or targeting human drones and suckering them into market shares is the most highly developed and in some way insidious industry in the United States. It takes many forms.

It is not just about competition for brand loyalty. It makes us slaves. Years ago it made people buy pet rocks and mood rings and compulsively collect Smurf miniatures. Harmless fun by the sound of it.

But these days, the choices and compulsions are more sinister and gigantically soul-corrupting. Our students are not taught to realize when the hidden signals from merchants, media and government are taking them over in much the same way that computer troubleshooters can control someone else's cursor from afar.

That makes them fair game not only for entrepreneurs but also for demagogues.

They need to know how to think, resist the lures of political, cultural and social fashions.

They've got to discover, perhaps for the first time, that moral absolutes do indeed exist and not be content to re-invent them with warped specifications to suit the moment.

The last unit in my Summer Curriculum Bucket List is “How to Repel and Not Be Magnetized by Fake News.”

Fake news is bombarding us from all directions and partisan camps. We tend to favor and make excuses for propaganda, regardless of where the truth lies, when it comports with our own views.

At the beach this summer, explain this kind of riptide also. Minds can get swept away in an undertow too.

We've got to rediscover our capacity to be wrong even when our passions won't hear of it. The skill to recognize our weaknesses takes more skill than holding a baseball bat. Show your kid both.

Our students mimic us when we go wild with anger and proselytize about our uniquely correct opinions. Political biases, especially, which take on a life all their own, define and defile us.

Critical thinking has been degraded into an outmoded sentimental habit which does nothing to move arguments anymore. Because of that, a cross-generation has emerged of "useful idiots" to various narratives, optics and movements.

How can we expect students to show tolerance and sportsmanship in debating opposing positions, when the news is rife with instances of workplace and government retaliation against people who express what for many decades was considered mainstream opinions?

When the next generation feels comfortable with the tyranny of collectivism, we're lost as a nation. When everyone's individuality is aligned to trending  ideology and nonconformists are vilified and punished in the public squares, workplaces and schools, then they will lose their autonomy as thinkers, actors and citizens.

A few weeks ago, there was a true story in the papers about a guy who was the sole passenger in an airborne plane, when the pilot suddenly fainted and the passenger, having had zero training as a pilot, successfully landed the aircraft because he followed directions from an air traffic controller.

The guy had to listen thoroughly, detach himself from distractions, think clearly and act resolutely. That's what our students must do if they are to detect fake news and the vanity that tells us our enemies are always wrong.

Give the opposition credit when due. For instance, Mike Lindell, the "My Pillow" guy, who is a right-wing conspiracy theorist, has lost a fortune by being canceled by all the "big box' stores. The latest is Walmart. But he says there will be no layoffs in his company. That's a principled decision, even if we otherwise don't like the guy.

Soon it'll be July and August. Let's not overthink the demise of education while we're in our timeshare shelters.

Let's resolve this July 4th to celebrate our birthright of independence from every form of man-made and state-sponsored effort at controlling our thoughts and behavior by keeping us blissfully and compliantly ignorant.