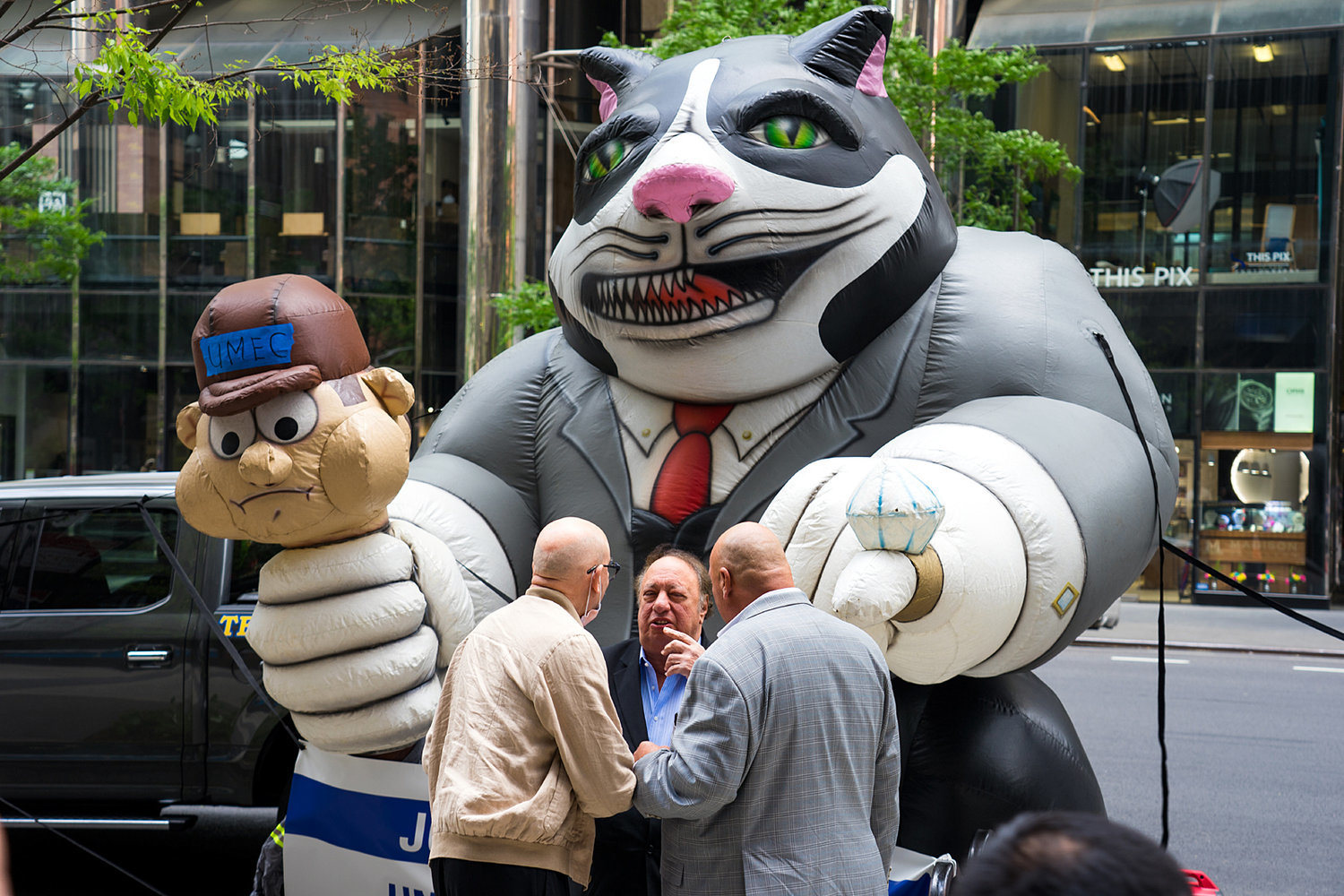 These are signature "takes" of serial billionaire John Catsimatidis, whose kingdom of entrepreneurial coups suggests a sophistication craftily concealed within the "regular guy" persona he affects.

When he purchased WABC radio with coins that had fallen through his pocket, he conferred upon himself the status of on-air talent and was guaranteed a slot as a peripatetic talk-show host. This has raised his public profile above its former peak when his mayoral campaign fizzled.

He is now an operator far bigger than his empire of possessions. He is the proprietor of a corporate octopus with arms that wrap around subsidiaries galore. They reach industries in daunting profusion.

His holdings are not restricted to the Gristedes and D'Agostino supermarket chain, real estate projects, aviation and oil.

His most abiding and consuming interests is as a decisively influential go-to guy in multiple discreet guises behind the scenes in boardrooms, politicians' suites or in front of cameras and microphones.

Now there is labor strife at the Brooklyn fuel terminal where operators, mechanics and technicians from his United Metro Energy Corp. rallied at City Hall last week to mark the one-year anniversary since Catsimatidis' perceived intransigence forced their hand to strike. Unfortunately it hardly hit the papers.

Progress towards a settlement has been slow as molasses and management seems unwilling to escalate the pace of negotiation beyond the frenetic pace of frozen honey. What's the urgency of sub-standard wages, slipping benefits and job insecurity ultimatums?

Hastening in almost the same breath as when Catsimatidis points to his proud record of avoiding strikes for a half-century, he asserts his right to permanently replace workers.

UMEC's contract with the city is worth tens of millions of dollars. They deliver fuel to government agencies, such as schools, CUNY and human services. They've branched out to fueling labor unrest.

Eric Adams, whose mayoralty Catsimatidis is perhaps coincidentally very sanguine about, says that UMEC is in compliance with the city's procurement rules and he declines calls to revisit their arrangement. The city is not honoring the teamsters' picket lines.

Regardless of how any technical ruling of the National Labor Relations Board or other interventions may turn out, this may be one of those times when it should be a matter of voluntarily yielding to fairness.

John Catsimatidis is a far cry from being a union-buster like Charles Koch and so many of his insidious ilk. His supermarkets are among the minority that are unionized.

He's by no stretch the worst of rogues.

But obviously he's not in business to make this a better world and he is not chomping at the bit to be morbidly magnanimous to employees. Still, his authoritarianism as a magnate of commerce comes off less odious and invasive than his accomplices in portfolio-gathering.

On the radio he sounds sincere, but this could be just a pose. Style sometimes rings truer than substance. Especially when the actors are crafty and control the voices and the strings.

Catsimatidis is a happy camper. He has donated extravagantly to all political party camps and players. He donated one of his private jets to candidate Bill Clinton's presidential campaign and also lavished favor on former Wisconsin governor Scott Walker, among the most odious union-busters in the immutable cosmos.

He is a Democrat, Republican, liberal, Conservative and Independent, depending on the winds. He hedges his wagers with the proviso that he always bets on himself. He is a master at playing both sides against the middle and deriving glee and profit from the fray. And he has an impish side too.

According to Crain's New York Business, he once lost a trademark infringement suit to Trader Joe's when he opened up a nearby Trader Johns. And The New York Times reported that in 2018, while dining at Cipriani, he was surprised to see his daughter Andrea at a table with a partner he hadn't seen before.

So he uploaded an image of the lad to a facial recognition app, presumably to verify his eligibility, and discovered that the guy was nothing less than a venture capitalist. Another Mr. Jackpot.

Andrea, chair of the Manhattan Republican party, is an executive, principal, vice-president and managing director of various enterprises held by her dad, according to her Wikipedia page. He reportedly showered over a million bucks on her wedding, which dwarfs his investment in Ukraine war relief.

To be fair, though, he has also dedicated his philanthropic time and resources widely and wisely.  His hands-on immersion implies conviction beyond the quest for a tax deduction. As seen through a perhaps too-forgiving kaleidoscope, Catsimatidis is not a total heel.

Catsimatidis factually recalls his roots, but with a hiccup of plausibility, he lays claim to lessons he learned from them. Struggle humbled but never humiliated him, he wants us to believe.

We are conditionally ready to do so. When he talks to his radio "sidekick" about his faith in "common sense" from both Democrats and Republicans, he sounds like a genuine sojourner for peaceful solutions. Is that reality or must we, given his intransigence with the Teamsters, slap our faces to be restored to it?

If he can reach across the aisle of partisanship, why can't he do a handshake across the management-labor negotiating table?

He is a rags-to-riches showpiece. He is an immigrant who rose "the hard way,” attending public schools and dropping out of New York University to become a self-made millionaire in his early 20s.

In his WABC promos, he is introduced as somebody who "is involved in a number of businesses.”  That belongs in the Guinness Book of Records as an understatement.

Earlier this month, a fellow substitute host and Catsimatidis were shooting the breeze about rumored changes in CNN's political orientation. Catsimatidis' partner said something about his boss's potential stake in the network's future. It's likely that it was pure speculation, as was the fantasy of how Catsimatidis could transform the movie industry, but it was followed by an abrupt and awkward shift of topic, not a segue.

Mr. Catsimatidis is a powerful man. Don't let his down-to-earth style and idiomatic expressions fool you. Anyone on the outs with him could end up blacklisted by civilization, it appears.

He is a megastar of connections, an impresario of  non-illicit fixers. Many would say a bona-fide problem-solver. He has created thousands of jobs and all I've hired is psychiatrists to do cleanup work.

John Catsimatidis can fix the shameful state of affairs while repairing his relationship to labor without losing face. He can restore harmony and the affinity professes to feel for productive, loyal employees.

He should break bread with the strikers, not their chops. If he engages and makes concessions to decency, he may be discerned perhaps not quite as a statesman among fat cats, but at least as a gentleman.

Ron Isaac is a resident of Queens.

Rowling: provocative, yes, but a global treasure too

In Buffalo, there were many accomplices

Delta dawn, or pie in the sky? 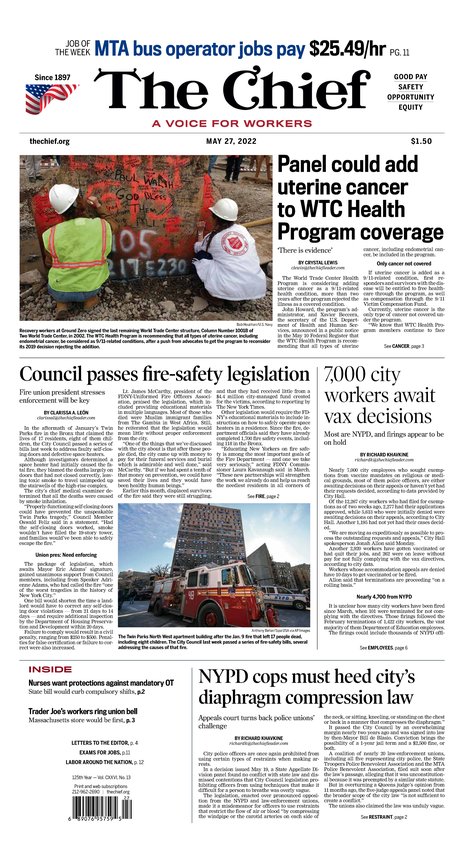