DSNY recruiting exam is the first in 7 years 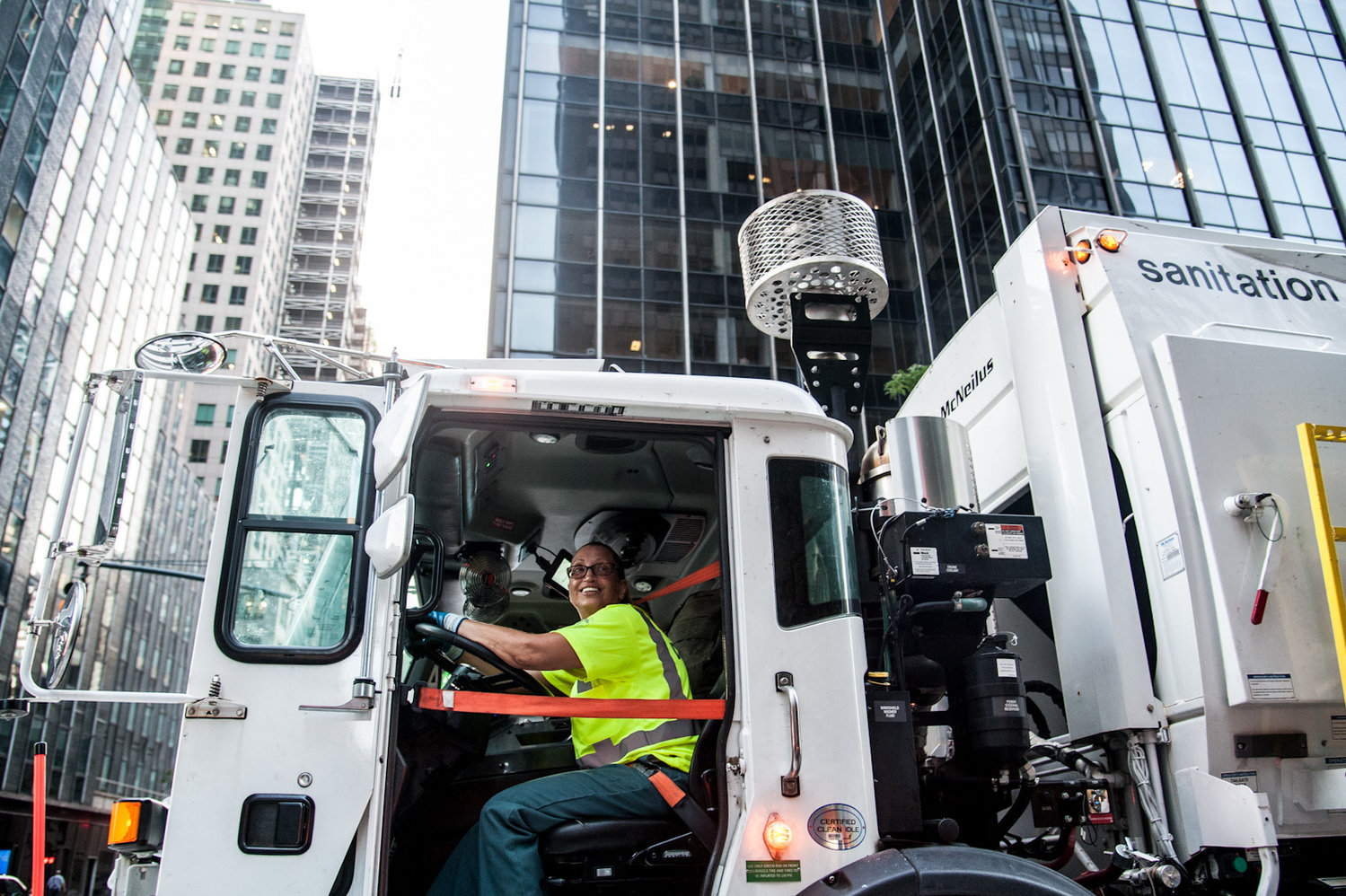 For the first time in seven years, the city will hold an exam for sanitation workers. Above, Dawn Kaye, a SanWorker with the Manhattan 6 garage, worked her trash pickup route in Midtown East in 2019.
Rebecca White/The Chief
Posted Monday, June 13, 2022 3:18 pm
BY RICHARD KHAVKINE

Anthony Innone was in college in the spring of 2007 when he heard that the city would be holding a recruiting exam for the Department of Sanitation.

Thinking of applying, he recalled a conversation he and a friend had a few years before, when the two considered whether they would ever take up that line of work. “It’s like getting paid to exercise. It’s not such a bad gig,” he recalled answering.

So, Innone, then 21, paid the fee, took the test and scored pretty well. Tight finances, though, kept city hiring pretty tight for a few years. He would keep tending bar and working construction. But he eventually got the notice inviting him to take a physical and, if he passed, join with the city’s Strongest.

“I was in the Sandy Class,” he said last week, referring to the 2012 storm that wreaked havoc along the Eastern Seaboard and tossed debris and detritus.

“We did five days of training and then I was in the field,” Innone, now 36, said.

He would ride trucks in Harlem and Queens for a couple of years, and then started making his way up. Ten years on and he wouldn’t hesitate to do it all again — even if he did initially.

“To be honest I wasn't sure I was going to take it,” he said of being offered a gig with the DSNY. In his mid-20s, tending bar in Astoria, things were pretty sweet, all things considered. “I got into the groove,” he said.

But a bar regular, a longshoreman, got wind of Innone’s hesitation and pulled him aside. Singling out the couple of sanit workers who were also regulars, he asked him: “Do you ever see any of them without a smile on their face?”

That helped convince him. “He was right,” said Innone, now a superintendent in the department’s public affairs division. “I signed on and understood why it’s a really great gig.”

And for the first time in seven years, city residents now have an opportunity to also put in for the Strongest. Applications for a September exam are being accepted through the end of the month.

But there’s likely to be some competition for a gig that, after five or so years on the job, pays over $83,000: More than 80,000 people took the sanitation exam when it was last offered in 2015, significantly more than the roughly 33,000 who took it the year Innone did.

Although the department typically hires a new class of anywhere from 250 to 400 workers each summer, the hiring list compiled following the 2015 exam “was too old,” said Harry Nespoli, the president of the Uniformed Sanitationmen’s Association, Teamsters Local 831.

Nespoli also welcomed news of the exam, since, he said, the agency is short of staff. He cited numerous reasons for departures, including the expense of living in the city, rising crime and the city’s coronavirus vaccination mandate, which he said had cost DSNY hundreds of workers.

“And right now they're taking information from some sanitation workers on things that are going to be on the test, which is good because these are the ones that have been working on the job,” Nespoli said last week.

DSNY uniformed workers last fiscal year hovered around 7,200, or nearly 700 fewer than two years ago, although FY 2019 accounted for a staffing high-water mark.

“I believe we're going to get more than enough applications for it,” the union leader said of the exam for a civil service list from which candidates will eventually be called.

He also noted that the $61 application fee would net the city a pretty good fiscal windfall. “I hope they do the right thing with the money. I hope they get enough trucks,” he said.

At the exam’s announcement earlier this month, Mayor Eric Adams highlighted the sanitation department’s role in the city’s ecosystem. “The job that our men and women in the DSNY … carry out every day is just extremely impressive,” he said.

Adams also touted civil service, recalling his 22 years as city cop — he retired as an NYPD captain in 2006 — as important to his ability to provide for his family.

“The stability of this city is based on our civil servant,” the mayor said. “But we want to make sure that we have the diversity that's reflective of New York City.”