Against people with disabilities, who are shut out even as the city needs workers 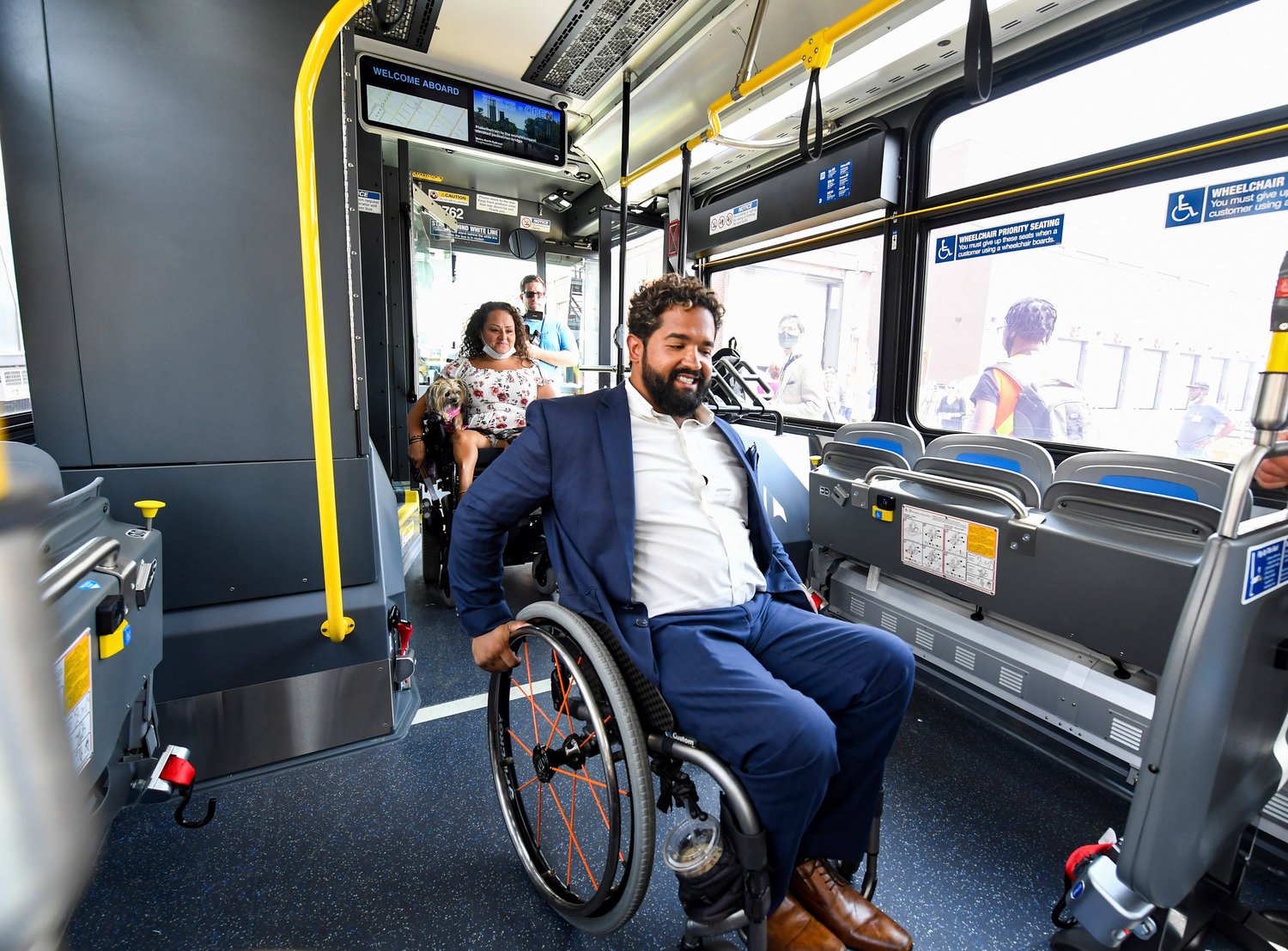 The MTA observed the 31st anniversary of the passage of the Americans with Disabilities Act at Coney Island Yard July 26, 2021. During a Sept. 28 hearing of the City Council’s Committee on Mental Health, Disabilities and Addiction, some Council Members took issue with the Adams administration’s requirement that municipal employees must work in-person, with Council Member Shahana Hanif stating that the policy 'discriminates against New Yorkers with disabilities.'
Marc A. Hermann/MTA
Posted Friday, September 30, 2022 5:41 pm
BY CRYSTAL LEWIS

Members of the City Council have again spoken out against the Adams administration’s mandate that city employees must work in-person, citing concerns that the policy is harmful to workers with disabilities.

During a Sept. 28 hearing of the Committee on Mental Health, Disabilities and Addiction, Council Member Shahana Hanif, who has lupus, recalled how having flexibility in her previous job as a Council staffer helped her manage the condition whenever she had flare-ups.

Although the majority of city workers never stopped working in-person, about 80,000 city employees were able to work remotely until they were ordered to return to the office last fall by former Mayor Bill de Blasio. Many municipal employees, Public Advocate Jumaane Williams, as well as civil-service unions such as District Council 37, have called on the city to come up with a telework option. But Mayor Eric Adams and his staffers have doubled down on having city employees work in-person to set an example for private-sector workers.

Some current and former employees cite the lack of a hybrid option as a major reason why workers are leaving civil-service. In March 2020, the city’s job vacancy rate was 1.5 percent; it now stands at 8 percent, with 24,000 unfilled positions across the city.

“I think we have a demand for a workforce that doesn’t exist right now, every city agency is understaffed at this point, and there are individuals sitting at home right now who are quite capable of doing those jobs if they were provided the tools, but I think that they unfortunately require that we all play a role in demanding that they be seen and heard,” said Deputy Council Speaker Diana Ayala.

She called on the Mayor’s Office for People with Disabilities, whose staffers testified at the hearing, to work with the Department of Citywide Administrative Services to identify titles whose tasks can be done remotely and that can then be filled by city workers with disabilities.

Section 55-a of the state Civil Service Law allows those certified with a mental or physical disability to be hired for public-service positions without having to take a civil-service exam.

The Council Members questioned how many city workers with disabilities have left their jobs since the start of the pandemic. MOPD officials noted that they only tracked individuals with disabilities who were hired through the 55-a program. A 2021 AccessibleNYC report released by MOPD found that 85 percent of 55-a participants hired in 2019 were still on the job a year later, despite the pandemic.

Nearly a million New York City residents have a disability. The percent of working-age New Yorkers with disabilities who are unemployed has more than doubled during the pandemic, from 7.4 percent in 2019 to nearly 17 percent in 2021, according to Center for an Urban Future.

Martha Jackson, the assistant commissioner for employment and business development at MOPD, highlighted NYC: ATWORK, an employment program administered by the agency that has connected nearly 700 individuals with jobs and internships since starting in 2017. The average salary for these jobs was $53,000 a year.

“There was a real need for this program, and that need has grown over the past two-and-a-half years due to the Covid-19 pandemic,” she said.

Despite increasing demand for MOPD’s services, the agency has an annual budget of just $820,000 and seven staffers, which was significantly smaller than the budgets of comparable agencies in cities such as Boston and Chicago, Council Member Linda Lee noted.

She added that with remote work “becoming the norm during the pandemic, it has resulted in a window of opportunity for the inclusion of individuals with disabilities within the workplace.”

Melissa Lent, a policy researcher at the Center for an Urban Future, called on the city to become “a national leader in employment for people with disabilities.”