But stops short of ordering rehiring 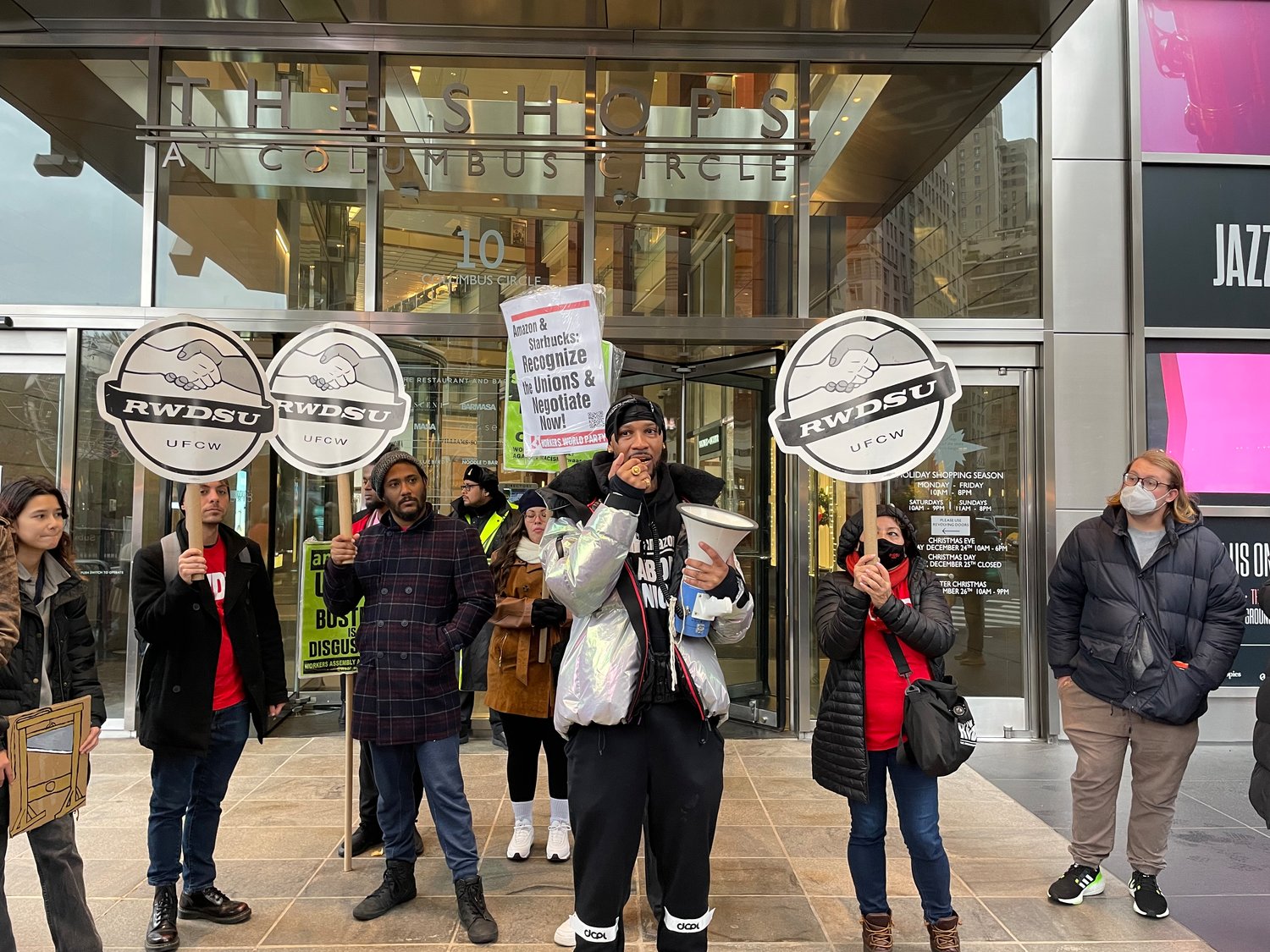 Chris Smalls, the president of the Amazon Labor Union, center, during a protest outside the Columbus Circle commercial mall, Nov. 30. Smalls and a few Amazon workers sought to draw attention to a recent court victory while The New York Times’ DealBook Summit, attended by Amazon CEO Andy Jassy, among others, took place in the Jazz at Lincoln Center concert hall inside the mall.
Duncan Freeman/The Chief
Posted Friday, December 9, 2022 12:00 am
BY DUNCAN FREEMAN

While Amazon CEO Andy Jassy spoke at The New York Times’ DealBook Summit last week, a few of his employees spoke out as well — by protesting outside the entrance to the event at Columbus Circle.

“Our CEO came to town,” Chris Smalls, the president of the Amazon Labor Union, said Dec. 6 when asked why workers protested the event. “We came to remind him to come to the table, to stop union-busting and to remind him that we’ll see him in court.”

Smalls, himself a former Amazon employee, came to the protest fresh off of a Nov. 18 court ruling he said had energized his union members. The ruling, handed down by U.S. District Judge Diane Gujarati, ordered Amazon to stop firing workers employed at Staten Island’s JFK-8 facility in retaliation for organizing.

The order arose after an Amazon employee, Gerald Bryson, was fired from the e-commerce giant’s warehouse in April 2020. Bryson was fired along with Smalls, with both of them alleging they were terminated solely for trying to organize workers at the facility. Both continued to try and unionize the warehouse despite their dismissals and in April 2022, workers at JFK-8 voted to make their fulfillment center the first unionized Amazon facility in the country.

At the Columbus Circle protest, the Amazon workers and their supporters chanted in unison to demand a contract and held signs encouraging Amazon’s executives to come to the bargaining table. Negotiations have yet to begin eight months after workers at JFK-8 won their election, according to Smalls. The protestors hoped they could stop some passers-by from attending the conference, or at least raise awareness of their unionization campaign and the recent ruling.

The Amazon Labor Union has so far failed to unionize other Amazon facilities, losing elections at another facility in Staten Island and in Albany. But Smalls was confident the recent ruling could help shift the tide. “This is going to give workers a lot of momentum to join now that they know they are fully protected,” he said. The union leader added that he sensed “very good positive momentum for the union and we're gonna ride that into the contract fight."

Gujarati’s order stopped short of mandating that Amazon give Bryson his job back but she did order Amazon to read the entirety of her 30-page decision to the employees at JFK-8.

Managers at the facility posted copies of the order throughout the facility and read the text of the ruling out loud to employees each day from Dec. 1 through Dec. 5, including over the weekend so that workers on every shift could hear the order.

“While I'm frustrated that I have to continue to fight in the courts to secure justice in my case, I am glad that this order protects the hundreds of thousands of Amazon Workers across the country who are just trying to organize for safer working conditions and living wages,” Bryson said in a statement responding to the ruling.

At the rainy Columbus Circle rally, Smalls called out leadership in other prominent city unions for not joining the ALU in protesting The New York Times’ event.

“There are a lot of people that need to be standing right here that are not here right now,” Smalls said at the rally. “Some of them represent the major unions in this city, and they are absent today.”

Speaking with The Chief this week, Smalls reiterated that the ALU is proudly "independent and worker led,” and emphasized that “establishment unions have a lot more money and power,” and should do more to stand with Amazon workers.

“It’s not fair,” Smalls said to close out the rally outside of the summit. “At the end of the day, I’m just a worker, the people I’m organizing with are just workers, we don’t have much, but what we do have is people power.”