Crafting in the cemetery

At Green-Wood, a thriving trades program is a stepping stone 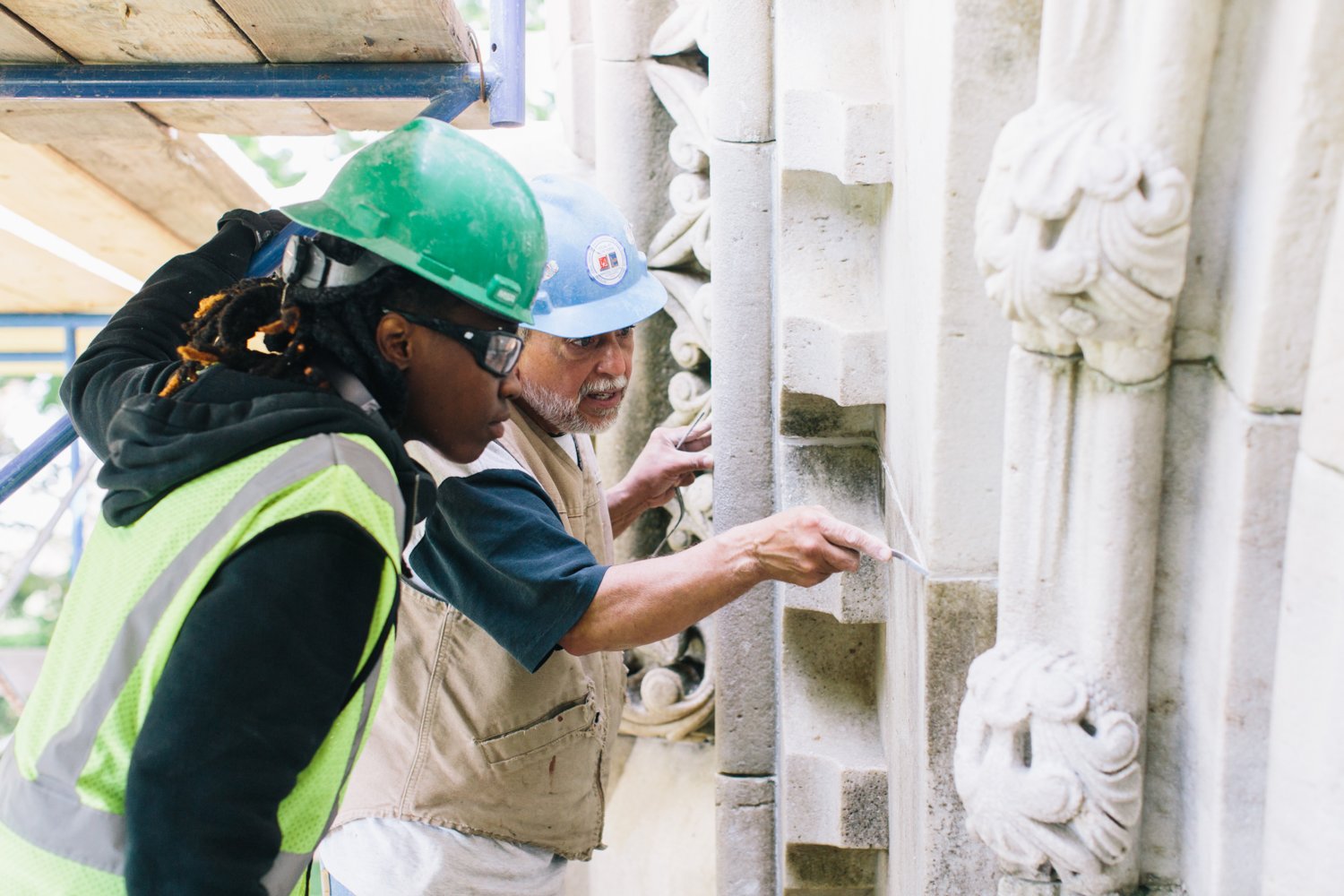 The Bridge to Crafts Careers Program, launched by the World Monuments Fund in 2015 at Woodland Cemetery in the Bronx, gives a selected group of interns the opportunity to learn masonry cleaning, conservation and maintenance techniques, along with a possible career track. The program expanded to Green-Wood Cemetery in Brooklyn a few years later. Above, a master craftsman instructed one of the program’s participants at Green-Wood in 2018.
Rowa Lee, courtesy of World Monuments Fund. 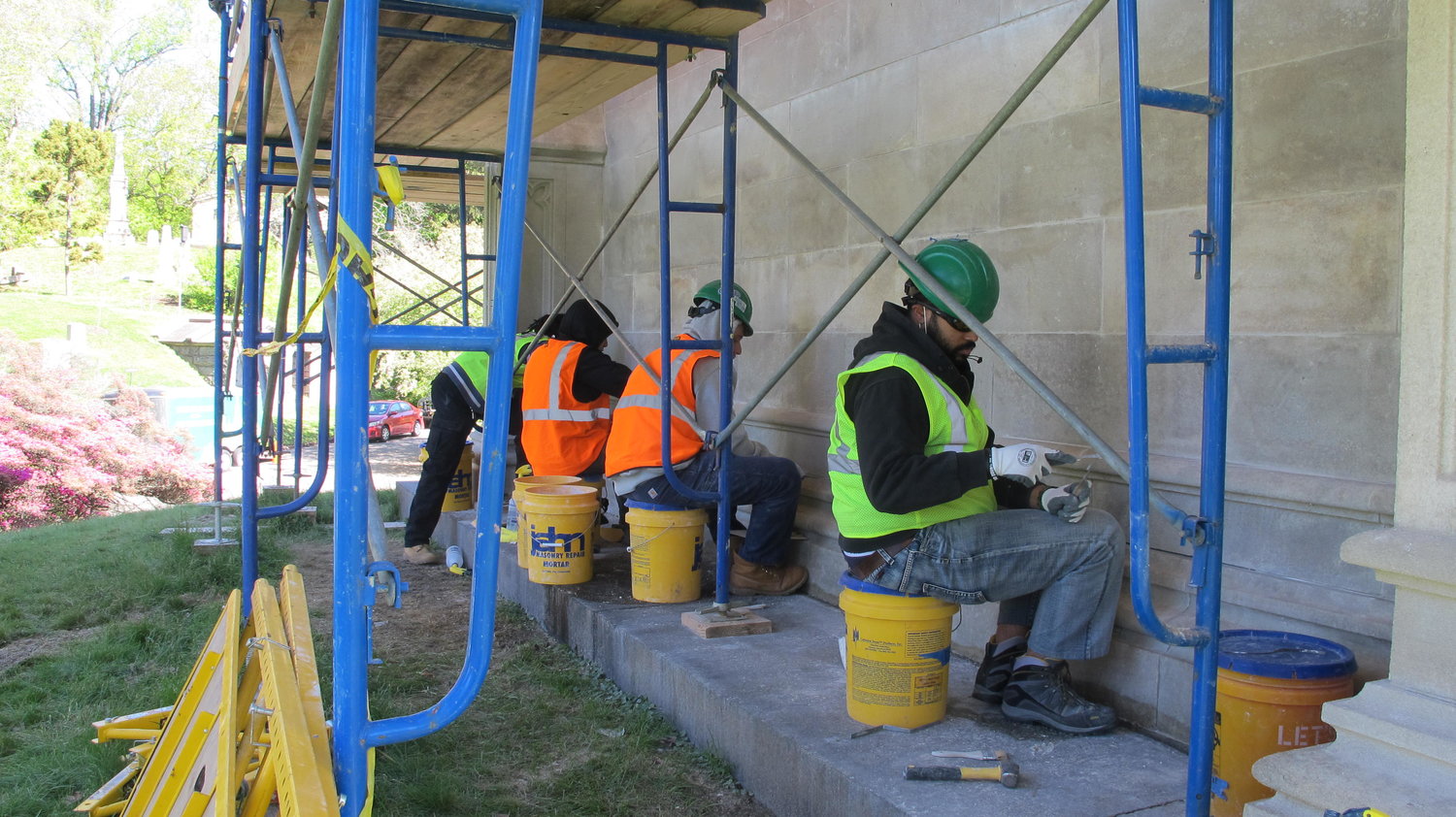 A few of this year’s Bridge to Crafts cohort, who range in age from 18 to 27, work on the Phelps Mausoleum at Green-Wood.
Inci Sayki
Previous Next
Posted Tuesday, May 17, 2022 4:12 pm
BY INCI SAYKI

It is a village for the dead. But Green-Wood Cemetery is also an open-air museum.

The National Historic Landmark, spread over 478 acres, in west Brooklyn features Victorian-era monuments and sculptures, and maintains them through preservation efforts just as it honors the dead.

Among them is the Phelps Mausoleum, a monument dating to about 1860. It sits atop a hill with a pond before it and gravestones behind it.

These days, under scaffolding surrounding the mausoleum are eager trainees in safety vests honing their masonry skills.

Morgan Barkley, a hip hop producer and rapper, was among those replacing old mortar on the granite and marble mausoleum. The 23-year-old came across the masonry training program on Craigslist. Despite having no prior experience, he was inspired to join the construction trade after watching an episode of the docuseries “Home,” which documented a craftsman transforming an old building into a community space.

A means to a career

Barkley is among 14 trainees who take to Green-Wood’s grounds to learn the masonry craft. The students, who range in age from 18 to 27, are taking part in the Bridge to Crafts Careers Program, an initiative offering underserved city youth hands-on technical training and, later, an opportunity to get placed in a stable career.

Like Barkley, the majority have no experience in the trade, but they are hopeful of landing a foot in the construction industry following the 10-week paid training program, a partnership of numerous organizations, among them the World Monuments Fund, which founded the program; Opportunities for a Better Tomorrow, a social services and workforce development organization in Sunset Park; the International Masonry Institute; Bricklayers and Allied Craftworkers Local 1; and the NYS Regional Economic Development Council.

In a city where the cost of living can be astronomical and the construction sector employs hundreds of thousands of workers, the program offers not just a means to economic independence and job opportunities, but is also a way for city youth to participate in New York’s cultural heritage.

The students are taught by Green-Wood’s experienced restoration department and a master craftsman from Local 1. They receive classroom and hands-on training in masonry cleaning, conservation and maintenance techniques, and get to practice their skills on one of the cemetery’s historic monuments — the Phelps Mausoleum. During the scope of the program, they also receive Occupational Safety and Health Administration training and scaffold safety instruction from the International Masonry Institute. The program runs through May 27 this year.

The Bridge to Crafts Careers Program was launched in 2015 in the historic Woodlawn Cemetery in the Bronx. While the program continues to train the next generation of historic-preservation trade workers at Woodlawn, where landscape preservation training also takes place, it expanded to Green-Wood in 2018.

During the 10 weeks, trainees are paid $15 per hour, and following the program they are offered an opportunity to take the apprenticeship masonry test with the Bricklayers and Allied Craftworkers Local 1. About 20 percent of Bridge to Crafts participants are offered an apprenticeship, which pays $26 an hour to start and offers benefits.

Other trainees have gone on to work at entry-level jobs with private restoration firms, city parks or cemeteries. The World Monument Fund has found that the program’s graduates, post cohort, have stayed in some type of restoration, preservation or construction for at least a year.

The construction trade is one of the most lucrative fields in the city, and the restoration of historic buildings is booming business. “The city brings in millions of visitors and that translates to billions of dollars for the economy,” said Ann Cuss, the World Monument Fund’s regional director for North America.

The interest in tourist attractions, specifically historic sites, puts an incredible amount of pressure on resources such as staff and historic materials, she added. “We hear all the time from our general contractors that there’s always this difficulty in finding skilled trades people that know how to work on historic materials,” Cuss said.

“Preservation is what makes New York, New York,” she said. “There are thousands of landmarks that will need to be maintained now and forever.”

The construction industry in the city enjoyed nine consecutive years of growth through 2018, adding 45,300 jobs, an increase of 40 percent, making it the second-fastest-growing sector after the hospitality and leisure sector, according to a 2020 report by the state Comptroller’s Office.

The pandemic brought that growth to a halt, with the state placing a pause on nonessential projects from March to June 2020.

But the industry expects to rebound in the city as federal relief plans, pent-up demand for residential projects and commercial renovations, along with new infrastructure projects, boost activity and spending.

“The construction industry has played an integral role confronting many of the physical challenges faced during the pandemic in New York City and New York State. A healthy construction industry will be needed to continue that role, rebuilding the City and State during the recovery, so that we are prepared for the future,” the state comptroller wrote in a 2021 report.

But trade work is still viewed as something of a disreputable occupation.

“I hate to say this but I feel like the trades in general kind of get a bad reputation,” Cuss said. “They’re thought about kind of like a last resort.” And while more than half of construction workers had no college experience in 2020, according to Cuss, the Bridge to Crafts program offers an alternative and even lucrative way to connect young people to economic independence. In 2020, construction was the fourth-highest paying employment sector in the city, paying an average annual salary of $87,200.

However, aside from pay, the knowledge and know-how derived from craftsmanship not only works to preserve historic monuments but also helps sustain culture and communities, Cuss said.

“It’s really important to connect with the next generation of caretakers and craftworkers to ensure that this is not only an economic means and opportunity, but also a way to participate in the heritage process.”