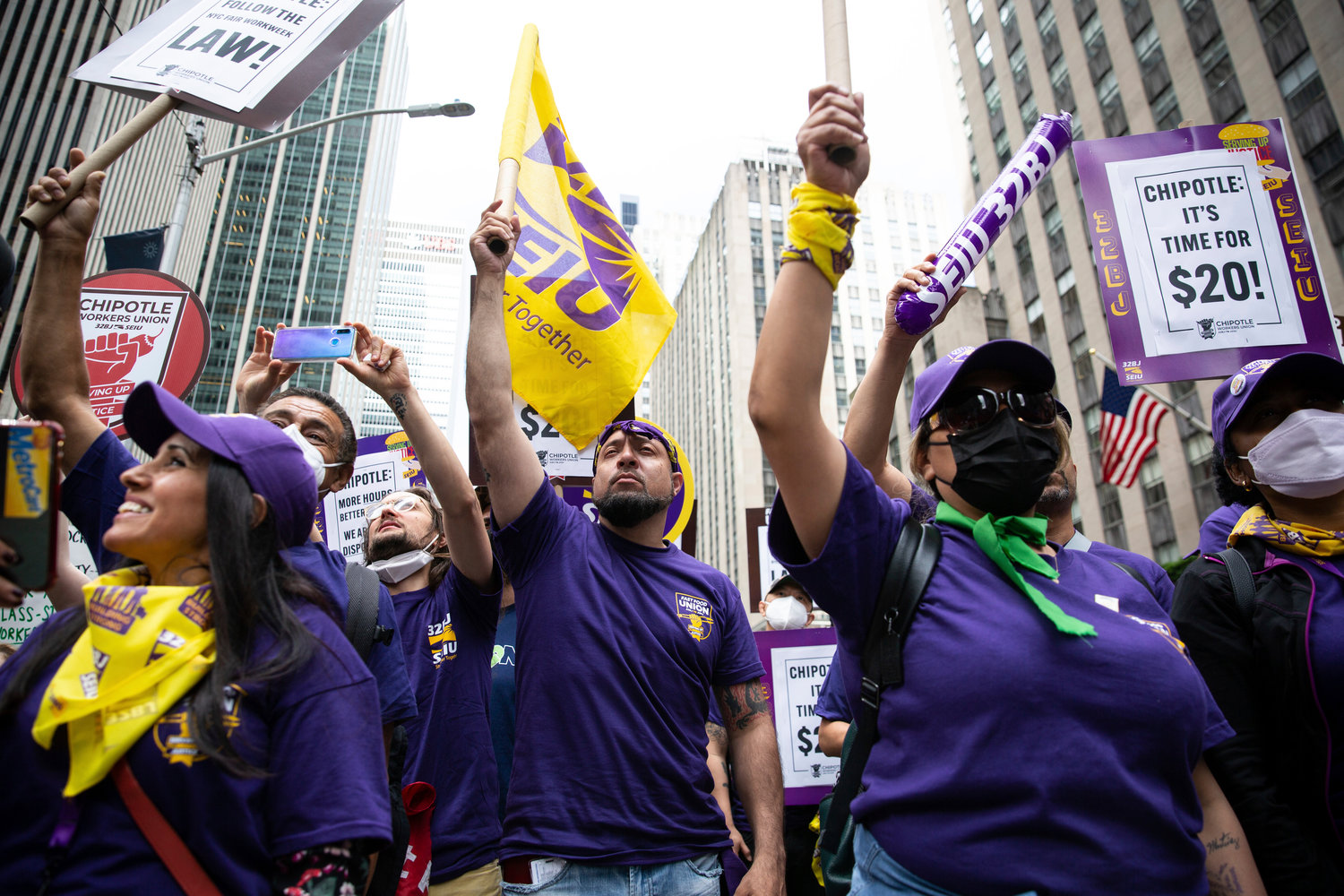 Current and former Chipotle workers marched in Midtown in May to demand wage increases and fair workplace practices. Mayor Eric Adams announced Tuesday that the company would pay out $20 million to city workers after an investigation by the Department of Consumer and Worker Protection found that the company had breached city workplace laws.
Karla Ann Cote/NurPhoto via AP
Posted Tuesday, August 9, 2022 6:21 pm
BY RICHARD KHAVKINE

Investigators from the city’s Department of Consumer and Worker Protection found that Chipotle had breached the city's Fair Workweek law by failing to post work schedules 14 days in advance, pay a premium for schedule changes and offer available shifts to current employees before hiring new employees.

At a press briefing announcing the settlement, Adams said city laws are clear. “Workers must be able to plan in their lives,” he said at City Hall. “The days of fast food workers as being merely college students, that is just not a reality. Many are parents. Many are sole providers for their families. … And that's why we will continue to ensure that they receive the benefits that they deserve.”

He added that restaurants are a “vital” part of the city’s economy.

“That's crucial for us, but they cannot exist without the hard working people who are cooking, serving, and delivering our food. It's part of that ecosystem that each part of the ecosystem must receive the necessary support and necessary benefits to thrive. And we're going to ensure that our restaurant workers are treated with the dignity and respect that they deserve,” the mayor said.

‘The fastest way to get relief’

The agreement followed a multiyear investigation by DCWP that got underway in 2018 when the department began to receive complaints from Chipotle workers at a few locations that they were being denied workplace rights.

The department filed a case against the company with the Office of Administrative Trials and Hearings that year, and expanded the case to Chipotle locations citywide in 2021 after ‘uncovering significant new information about violations across New York City,” the mayor’s office said.

Local 32BJ of the Service Employees International Union, which is trying to unionize the fast-food chain’s workers, also filed complaints against Chipotle. The chain, whose motto is “cultivate a better world,” has about 100 locations citywide, including 54 in Manhattan, 18 in Brooklyn and 10 in the Bronx. All of Chipotle’s locations are company-owned.

“This is the fastest way to get relief to the workers, reaching this settlement,” DCWP Commissioner Vilda Vera Mayuga said at the briefing. “We're really happy and pleased that Chipotle came to the table to resolve this issue, this lawsuit, in the way that they did.”

The company will also pay $1 million in civil penalties to the city.

"We're pleased to be able to resolve these issues and believe this settlement demonstrates Chipotle's commitment to providing opportunities for all of our team members while also complying with the Fair Workweek law" Scott Boatwright, Chipotle's chief restaurant officer, said in a statement.

Boatwright said the company has taken steps to improve compliance through measures such as improved time-keeping technology and looks forward to "continuing to promote the goals of predictable scheduling and access to work hours for those who want them."

The Associated Press contributed to this report