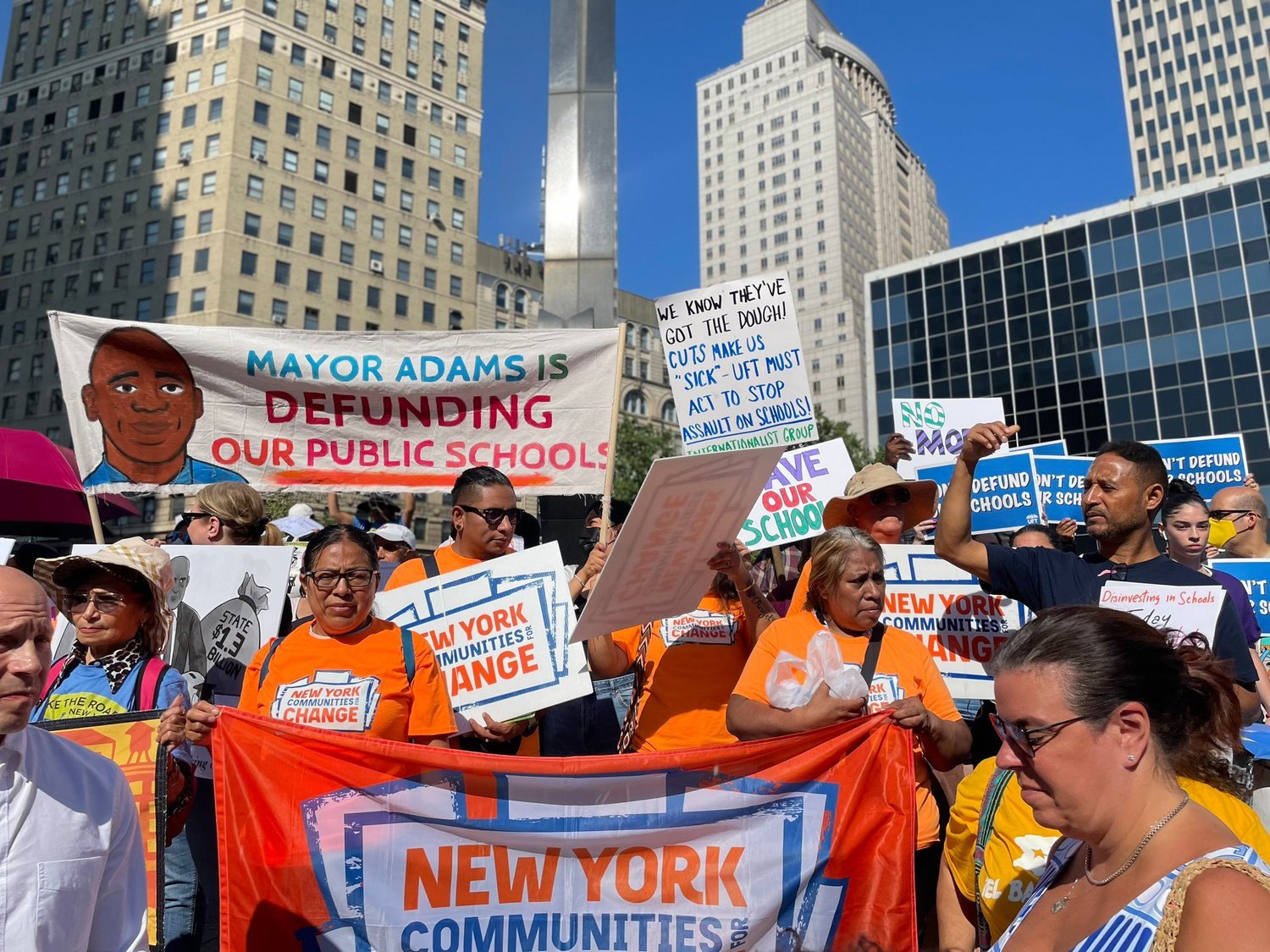 People rallied for increased funding for city schools near Foley Square Aug. 4. A Manhattan Supreme Court justice the next day found that Schools Chancellor David Banks’ reasons for bypassing a vote by the Panel for Education Policy, which oversees DOE contracts, were insufficient. An appeals court granted a stay allowing the budget to remain in effect.
Courtesy of United Federation of Teachers
Posted Wednesday, August 10, 2022 12:59 pm
BY CRYSTAL LEWIS

The city Department of Education can temporarily proceed with school budget cuts as planned after a state appeals court Aug. 9 blocked the lower court’s ruling requiring the city to vacate its education budget.

The appellate division granted a stay after the Adams administration appealed a New York State Supreme justice’s Aug. 5 decision that required schools to return to their FY2022 funding levels and permitted Mayor Eric Adams and the City Council to renegotiate the spending plan for city public schools.

The education budget will remain in effect until at least Aug. 29, when a hearing on the matter will take place. The first day of school is Sept. 8.

“We are pleased that the court has agreed with us and that we are allowed to move forward with our current spending plans," said Amaris Cockfield, a spokesperson for the mayor. “We will continue to defend the city's budget process.”

After parents and teachers filed the lawsuit against the city following plans to slash school budgets by $215 million, Justice Lyle Frank ruled Aug. 5 that the city violated state law by passing the $37 billion budget before the Panel for Education Policy, which oversees DOE contracts, could vote on the spending plan. Although Schools Chancellor David Banks issued an emergency declaration to bypass the vote, Frank argued that the city did not have a good reason to do so.

Frank’s decision did not require the Council and the mayor to reconsider the budget, rather, it grants them permission to renegotiate. Furthermore, the ruling did not “opine as to what level of funds should have gone into” the spending plan. Instead, Frank ordered school budgets to “revert back to the levels in the Fiscal Year 2022 New York City budget.”

The city implemented the cuts because of declining enrollment. After facing weeks of pushback from parents and educators, Adams announced Aug. 3 that $100 million in federal stimulus funds would be used for academic recovery (such as after-school tutoring services), while $50 million had been allocated to schools that appealed their budgets.

The United Federation of Teachers strongly opposed the cuts, which have forced principals to excess hundreds of educators. The average school was projected to lose more than $400,000 in funding, according to the Comptroller’s analysis.

“Let’s get this thing settled right, and let’s get our schools set up for September the right way,” he told PIX11 Tuesday.

“We fully support a re-vote on the DOE budget,” Krishnan wrote on Twitter.

Frank initially issued a temporary restraining order July 22 barring the city from going forward with the school budget cuts. Although the city projected that the school budgets would be reduced by $215 million, City Comptroller Brad Lander estimated the cuts would actually amount to $372 million.