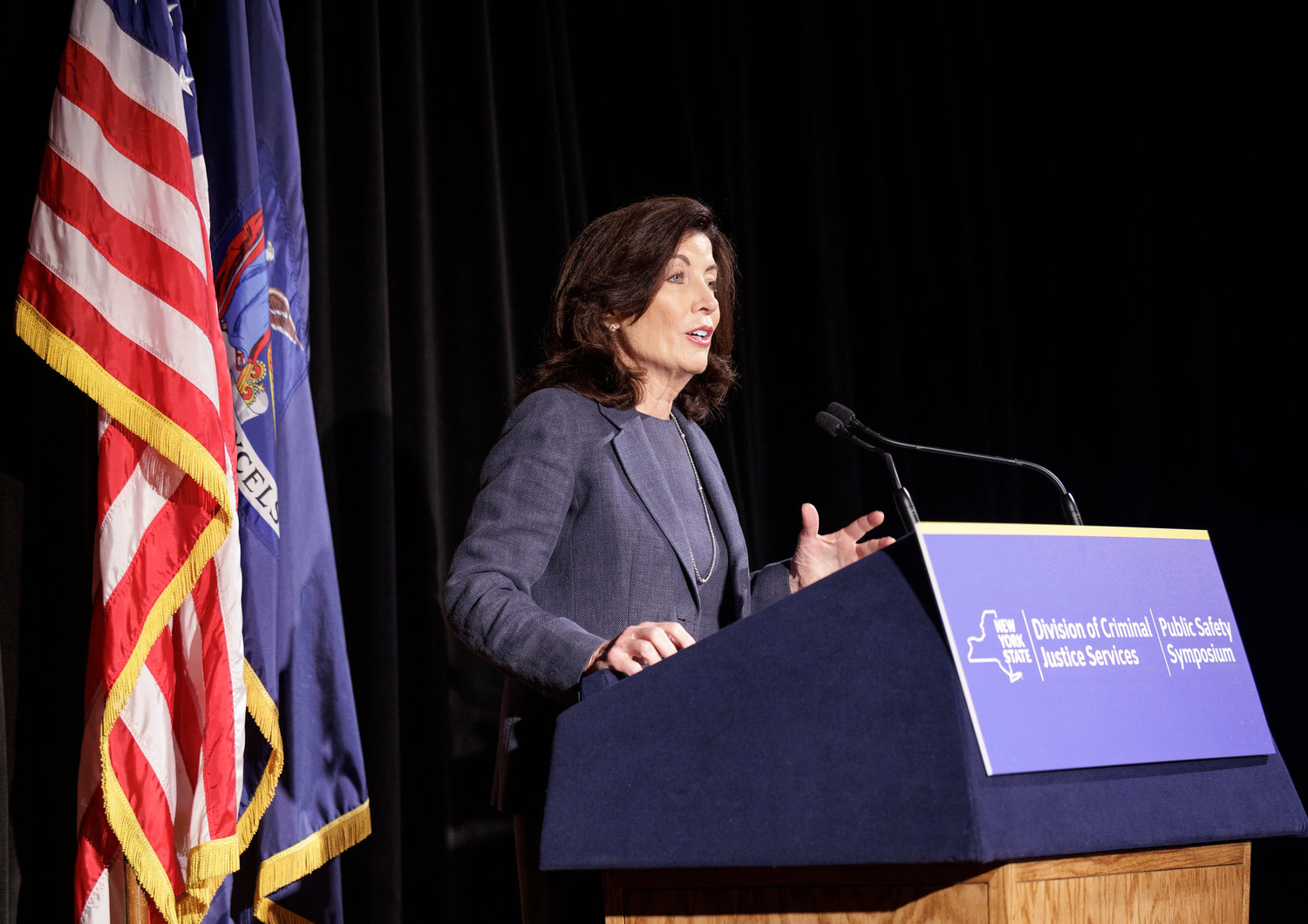 Governor Kathy Hochul last September delivered remarks at the state Division of Criminal Justice Services' Public Safety Symposium in Albany. Hochul vetoed a bill that would have granted lump sum death benefits to the beneficiaries of Westchester correction officers who are eligible to retire but die before retiring, to the disappointment of the Westchester County Correction Officers Benevolent Association.
Mike Groll/Office of Governor Kathy Hochul
Posted Friday, January 6, 2023 12:00 am
BY CRYSTAL LEWIS

The head of the Westchester County Correction Officers' Benevolent Association has denounced Governor Kathy Hochul’s veto of a bill that would have granted lump-sum benefits to the families of county jail staff who work past retirement eligibility but die before retiring.

Hochul last month cited cost as her reason for vetoing the legislation, known as the “Death Gamble bill,” alongside 18 other bills aimed at providing municipal employees with retirement or disability benefits.

“I fully support our public employees and appreciate the vital services they provide to New Yorkers; however, I cannot sign these bills because none of them include a funding source or plan to cover their costs in the current fiscal year or in future years,” Hochul wrote in her veto message. “The aggregate cost of these bills would impose a substantial burden on New York State taxpayers.”

But in a Dec. 20 letter to the governor, the president of the Westchester COBA, Neil Pellone, disputed that reasoning by noting that a fiscal plan was attached to the bill and that the Westchester County Board of Legislators passed a resolution that supported funding for the bill. Hochul’s office did not return a request for comment.

The union leader expressed disappointment and frustration that the benefits were not granted to Westchester corrections officers and wardens because similar benefits were given to Nassau and Suffolk County jail employees as part of legislation passed in 2021, he said during a Dec. 30 phone interview.

“I started seeking the ‘Death Gamble’ bill last year after I had a member who had a massive heart attack at 48 years old and died,” Pellone said. He said the legislation was especially important given that, according to some studies, the average life expectancy of 62 years for those working in law enforcement. A study of Buffalo police officers showed that their life expectancy was 22 years shorter than that of the general U.S. population.

Pellone said once a correction officer reaches retirement eligibility after 25 years on the job, families are granted just three years of death benefits if the employee dies before retiring.

“Throughout the years, we’ve had people who wanted to stay on the job, but didn’t because they didn’t want their wife to not get the money [if they died],” Pellone said.

The COBA president believed that extending the lump-sum death benefits is critical to attracting and retaining correction officers, who are already short-staffed. Over the past year, 22 correction officers retired and another 26 resigned, Pellone said. There are currently just over 700 Westchester correction employees, of which about 30 are out on long-term disability, and 775-825 inmates, according to COBA.

“We have to make some changes to make these people want to stay,” Pellone said, adding that the job has become more dangerous and less attractive over the years, with the number of applicants taking the correction officer exam dropping drastically over the last decade. “If a guy’s been here 25 years, shouldn’t he have the sense of security that his family’s going to be taken care of?”

“Rather than individually assess the merits of this bill, the Governor made a dubious argument that it would cost too much to fund all the civil service and pension related bills in the veto message and thus unilaterally denied a much deserved death gamble benefit to public sector workers employed by Westchester County,” the senator’s chief of staff, Johanna Garcia, said. “Senator Jackson will be reintroducing this bill next year and will urge his colleagues in the Senate to pass the bill once again.”