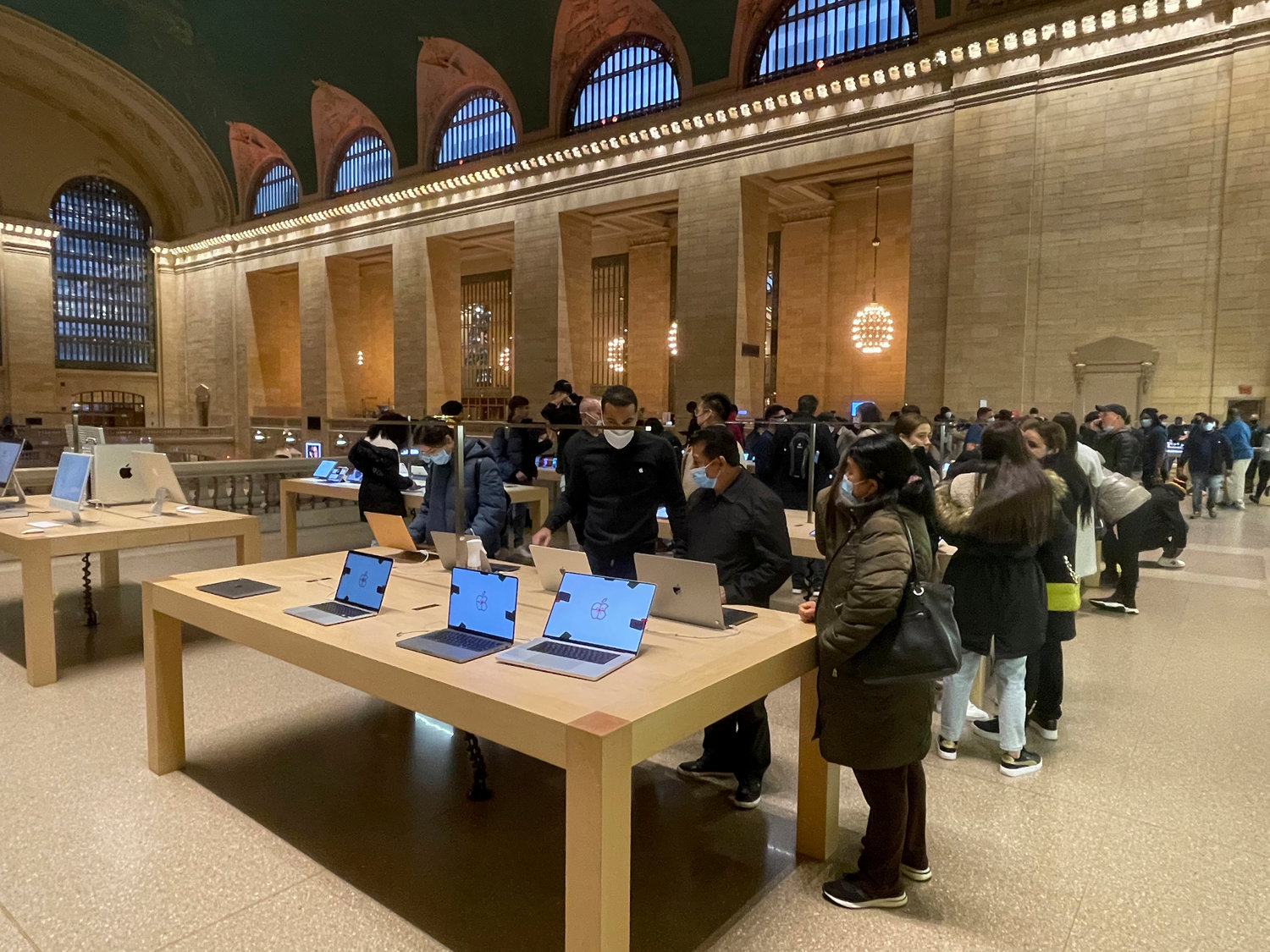 There's a high-tech worm in the Apple. It's a corporate maggot that leaves an incriminating trail of rottenness and slime.

Apple, of course, gave us the iPhone and so many other cutting-age products that increasingly seem to be the sole joy for many people who need diversion from their private world's careening towards the oblivion of true purpose.

Apple is a Goliath whose union-phobia has poised its forehead perfectly for their employees' slingshot to do its handiwork. With all their acumen, they still have no advanced device that will repel the trajectory of their union-busting boomerang.

There is no app to force workers to abandon their union spirit.

The labor rumblings at Apple have been getting louder and nearer this year, and though the large majority of their venues have not yet been blessed with unionization, they will be, with the collaboration of activists from other unions.

At their Grand Central location and World Trade Center flagship store, management coerced staff to attend anti-union meetings. In an ill-conceived appeal to what Apple viewed as its workers' better nature, their staff was subjected to exploitation and subtle blackmail.

It was straight from the corporate communal playbook of carrot-and stick antics: remind the staff that, as valued members of the corporate family, they share a common bond that commands one-directional loyalty and trust. Refresh the staff's pride in their individuality by beguiling them into rejecting the herd mentality of  settling for collective-bargainers' generic benefit packages.

In other words, serve up a high-fat diet of false assurances. A smorgasbord of "right-to-work" fallacies.

Last spring, twice within a single week, in New York City and Atlanta, the Communication Workers of America (CWA) filed complaints with the National Labor Relations Board against their iron-fisted, sometimes hidden in velvet gloves, union-avoidance ploys. According to Vice, Apple has retained a law firm that has vigorously defended McDonald’s and Starbucks against workers' alliances. Apple denies they are anti-union, but such denials are clothed in ether.

Apple's senior vice president of retail said, "I worry about what it would mean to put another organization in the middle of our relationship, an organization that does not have a deep understanding of Apple  or our business.” They don't know what they're doing and aren't enamored of the profit motive?

Apple stands by "the open, direct and collaborative relationship we have with our valued team members,”  the company says.  That's an example of "run-of-the-mill phrases that have alternative offensive meanings.”

It has elsewhere been alleged that union-organizing employees at Apple are driven to holding clandestine meetings and encrypting their communications using Android devices to elude Apple's snooping. Apple's internal espionage capacity is state-of-the art.

The NLRB recognized that Apple had indeed surveilled and interrogated staff, restricted access to union-advancing literature and made its staff captive to what were, in effect, anti-union sales pitches at its World Trade Center store.

Yes, the workers are always, strictly-speaking, "free to go" even as they remain prisoners of war in their workplaces during their compulsory attendance at subtle anti-union harangues, but in effect they are also on house arrest.

There have been charges of bias and intimidation. Last year Apple sacked Janneke Parrish, an organizer of a movement seeking to assist underrepresented groups within the company.

According to Wired, employees have complained of being taken aside and read the riot act, for which, of course, they have a kinder and gentler term. One employee was reportedly told that his immigration assistance would be rescinded in the wake of unionization.

Inflicting trauma is the nuclear option of corporate managerial style.

Productive and ambitious employees have realized that Apple's promises to them have not been realized. Apple reportedly conveyed in no uncertain terms that any pay boost might be offset by punitive practices affecting scheduled hours and opportunities for promotion.

A judge will hold a hearing, unless there is a settlement before Dec. 13.

Apple has almost 300 retail locations and over 65,000 workers in this country. Its revenue boomed from around $240 billion in 2017 to $378 billion last calendar year. According to The Washington Post, "its astronomical cash flow has allowed the company to spend tens of billions a year in stock buybacks and dividends for investors, buoying its share price.”

Whether they're called customer-service reps, sales associates, team members, "partners" or by any other terms in evolving workplace nomenclature (the growth of jargon puts the expansion of the universe to shame), Apple staff are incredibly knowledgeable and enthusiastic about the complex products they sell.

They are certainly "at home" and act like there's no place like home. They're truly "human capital," but have the Apple tycoons renounced capitalism by their union phobia?

Recently, friends of mine were visiting New York City and because they were on a tight schedule, they had to skip some of the major attractions and practice what they called "tourist triage.” Instead of the signature draws of the city, they patronized the Apple store twice, commenting on the "evangelical zeal" the staff showed when interacting with customers.

These workers don't behave like "clock watchers" who can't wait to make a mad dash for the exit as soon as their shift ends, even though it's understandable that employees do that if their bosses dock them for being two minutes late during a blizzard.

Yet the retail workers haven't been conceded a sliver of the astronomical profit pie. Managers' pay is colossal; inflation leaves the workers' trailing in the dust. The CEO's annual income is in the neighborhood of $100 million.

According to Gizmodo, Apple has so far not demonstrated quite "the same level of Monopoly-man style absurdity displayed by Amazon,” but that seems to be changing.

After following precedents at Starbucks and Amazon, we should stop being mystified by the apparent but illusory disconnect between the espousal of progressive values on one hand, and the pugnacious rebuff of them in their own backyard.

Hypocrisy is the sine qua non of "liberal" corporate practice.

The NLRB reports a 57 percent  jump in petitions for union elections during the first half of 2022 over the same interval last year. A labor expert quoted in an ABC News report noted that "the larger the workplace, the more uncertain with respect to the organizing environment.”

Despite the statistically small number of unionized big-tech companies so far, it's gratifying that progress is being made even in areas of the country where unions have been equated with the devil. The die is cast and the dice are honor-based loaded in favor of reasonable workers' self-determination.

It may be more time-consuming but it's plain that the climate is friendly. But labor organizing within the tech industry hit a near record high last year, and so have "whistle-blowing incidents that captured the public's attention and exposed companies,” observes collectiveaction.tech, an online platform that seeks to advance tech workers interests.

Unionization of workers at Apple is an international phenomenon that portends well for us stateside. On Oct. 31, 68 percent of its employees in Australia rejected management's proposal.  Of the company's 4,000 workers, 87 percent participated in the vote, setting up another likely strike on top of multiple previous walkouts in recent weeks.

Did the union initiatives at Apple in the U.S. inspire the Australian activity or vice versa? Does it matter? There is a bond that requires no introduction.

They demand more than a "seat at the table.” They need mirrors under the table to catch management’s  hanky-panky.

The wages of union-busting is felt more than in just wages. If I were Edward de Vere, 17th Earl of Oxford, I could dramatize the banner struggles and triumphs of workers since ancient times, but my only title is op-ed writer at The Chief.

I do know this much, however: Apple's script does not play right.