Most are NYPD, and firings appear to be on hold 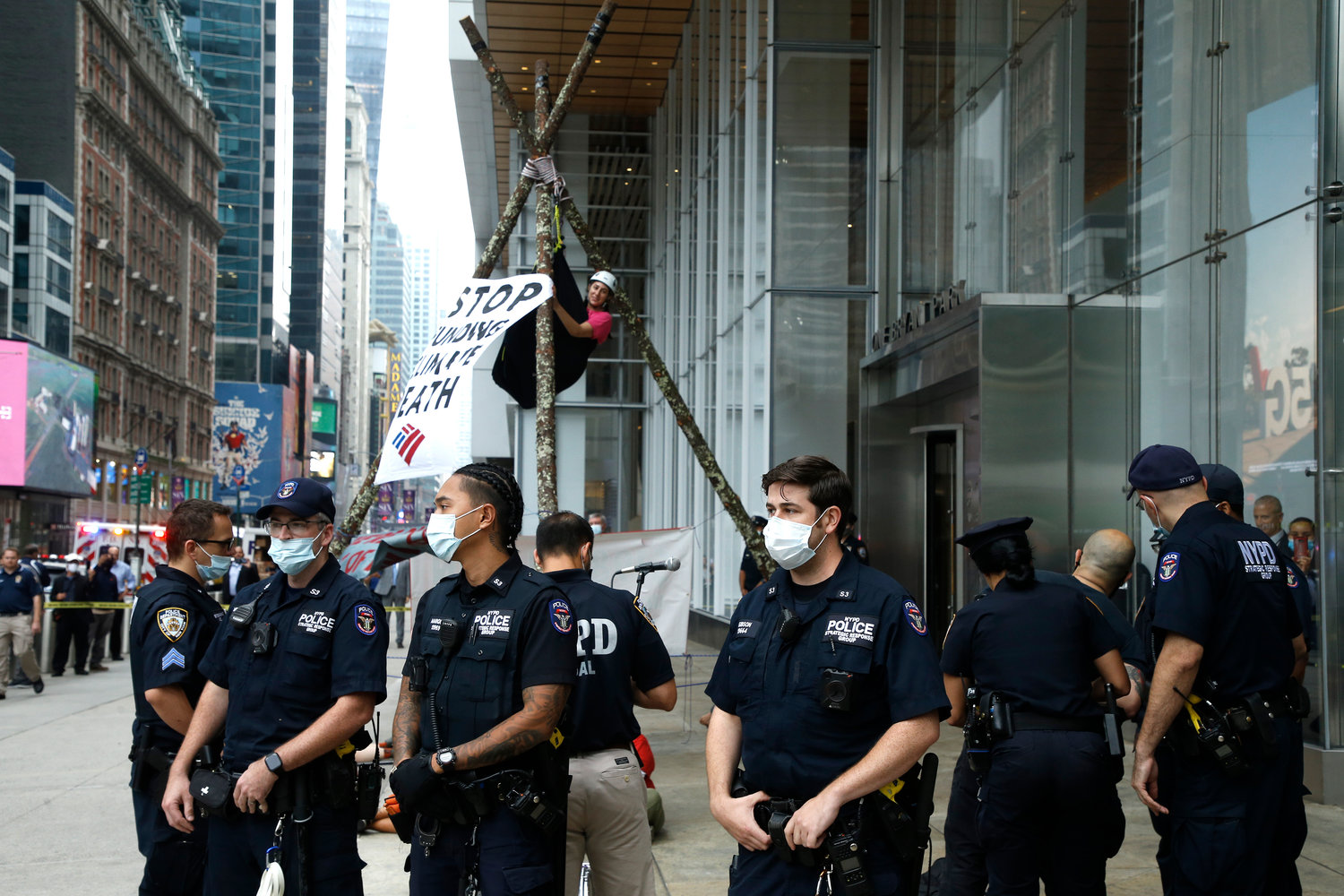 As many as one-third of the 10,000 city workers who have not yet received vaccination exemptions are NYPD officers, according to city and department data. Above, cops form a cordon around protesters during a September demonstration trying to raise awareness about environmental issues in Midtown.
J Lamparski /SOPA Images/Sipa USA, via AP Images
Posted Wednesday, May 25, 2022 3:45 pm
BY RICHARD KHAVKINE

Nearly 7,000 city employees who sought exemptions from vaccine mandates on religious or medical grounds, most of them police officers, are either awaiting decisions on their appeals or haven’t yet had their requests decided, according to data provided by City Hall.

Of the 12,267 city workers who had filed for exemptions as of two weeks ago, 2,277 had their applications approved, while 5,613 who were initially denied were awaiting decisions on their appeals, according to City Hall. Another 1,195 had not yet had their cases decided.

“We are moving as expeditiously as possible to process the outstanding requests and appeals,” City Hall spokesperson Jonah Allon said Monday.

Another 2,920 workers have gotten vaccinated or had quit their jobs, and 262 were on leave without pay for not fully complying with the vax directives, according to city data.

Workers whose accommodation appeals are denied have 10 days to get vaccinated or be fired.

Allon said that terminations are proceeding “on a rolling basis.”

It is unclear how many city workers have been fired since March, when 101 were terminated for not complying with the directives. Those firings followed the February terminations of 1,422 city workers, the vast majority of them Department of Education employees.

Harry Nespoli, the chair of the Municipal Labor Committee, said it was his understanding that current employees whose exemption requests or appeals are denied would be fired by the end of June if they don’t then get the jab.

The firings could include thousands of NYPD officers. Of the city’s nearly 15,000 employees who initially requested religious or medical exemptions from the city’s mandates last fall, more than 6,000 came from the NYPD.

The department  had 51,776 employees, 34,867 of them officers, as of April 7. Given that the department overall had a 91-percent vaccination rate as of earlier this month, about 4,660 NYPD employees would not have received the vaccine.

Infections are climbing in the Northeast, and particularly in New York City, where they are at their highest since the end of January, when the first wave of the Omicron virus was fading. The Centers for Disease Control and Prevention last week designated all five boroughs as having “high” Covid levels.

City Hall declined to release the number of NYPD employees whose appeals either had not been decided or were pending and the police department has not answered emails inquiring about the status of officers.

The Police Benevolent Association referred inquiries about possible firings of officers whose appeals were unsuccessful to the NYPD.

The union in March sued the city and others, asserting, among other things, that the mandate and its conditions as it pertains to officers violate the city’s charter and code since the mandate’s directives are the province of the NYPD’s commissioner and not the mayor’s or the health commissioner’s. The suit, which is pending, seeks the full reinstatement of its member officers who were terminated or have been placed on leave without pay.

The union is also party to a lawsuit filed by the Municipal Labor Committee arguing that the unilateral firing of employees violates collective-bargaining terms.

“We asked them to reconsider it because the elite people don’t have to be vaccinated and they’re going to work every day,” Nespoli said, referring to Mayor Eric Adams’ March directive that athletes and entertainers were exempt from the city’s vaccine mandates. “If it’s good enough for the ballplayers, or the elite people not to have the vaccination, it should be the same for the people who keep the city going.”

New city employees are required to be vaccinated.