TWU Challenger to President Claims She Was Wrongly Barred From Race 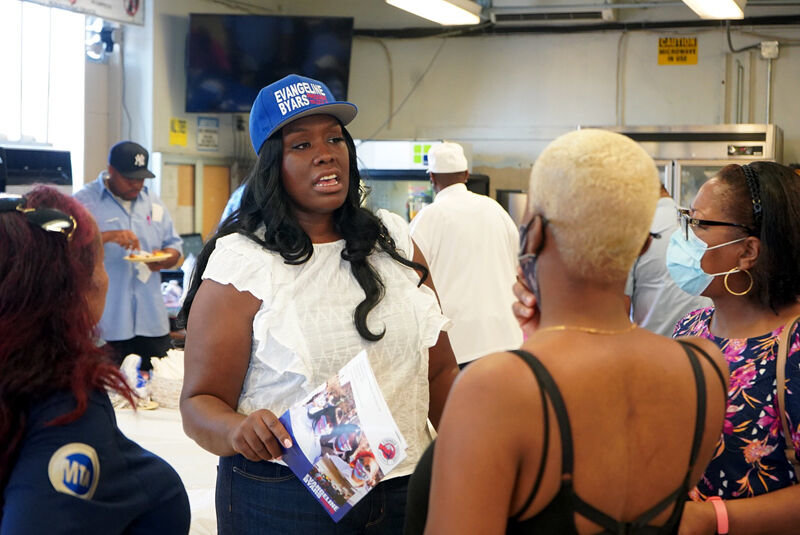 DUES SNAFU COSTS HER: Evangeline Byars, campaigning here for president of Transport Workers Union Local 100, claims she was improperly disqualified from the ballot, along with two of her running mates, on a technicality regarding unpaid dues, and that union President Tony Utano has altered the local's constitution to ease his path to a new term. The local's independent monitor, however, Sept. 12 upheld the finding that Ms. Byars was ineligible to run.

One of the two candidates challenging Transport Workers Union Local 100 President Tony Utano's bid for re-election this November has alleged in Federal court that he is engaging in "voter- suppression tactics."

In her court papers, Train Conductor and Local 100 Executive Board Member Evangeline Byars stated that she had been cleared by the union's Election Committee to run but that on Aug. 30 she was notified "she had lost her good standing for failure to pay her dues" earlier this year while she was recovering from the coronavirus.

She said that she brought her dues current as of April 28 but was subsequently disqualified because she failed to get an "exoneration" letter covering the earlier period.

Lawyers for Ms. Byars claim that the Utano administration departed from the union's constitution because they failed to provide a certified letter providing her with a 30-day notice regarding her dues situation.

The union responded in a statement, "The lawsuit is premised upon a fictitious reading of Transport Workers Union's Constitution. TWU Local 100 intends to defend against this baseless set of claims and is confident of prevailing. The plaintiffs are not being denied rights because of any improper reason. They have been declared ineligible to seek elected office simply because they failed to pay their dues in an appropriate and timely fashion."

Local 100's statement continued. "Both the International Transport Workers Union and the United States Department of Labor share the same view of the requirements under the law."

On Sept. 12, Barbara Deinhardt, the union's independent monitor, ruled against Ms. Byars, citing a July 1,2021 letter on the issue from TWU International President John Samuelsen. In it, he wrote that the notice requirement did not apply to members who are "not receiving wages because of injury, illness or layoff."

"Defendants [Local 100] sought to change the plain meaning of the constitution ten weeks before the nominations of internal union election of officers so as to create unequal rights that disenfranchises its sick, injured and ill membership to prevent union members the rights to nominate candidates of their choice," Ms. Byars contended.

Train Conductor Tramell Thompson, a candidate for president three years ago who was slated to run for vice president of Rapid Transit Operations on a slate led by Track Worker Paul Navarro, was also knocked out of the running for failure to obtain a timely letter of "exoneration."

"So, that whole rule is something they just made up retroactively that you had to ask for an exoneration of your dues by the 15th of the month when they are due—it was put in effect on Aug. 2, 2021—so the issue is how can any member be in compliance with something the union is saying is binding retroactively?" he asked during a phone interview.

'Proceed at Own Risk'

Ms. Byars alleged that the union's leadership permitted her to circulate nominating petitions while warning that she was "proceeding as you are at your own risk" because the union took issue with her eligibility.

She also charged that Local 100's dues office "only collects payments in person" and that "there is no method to pay dues online, via email or over the phone. The one employee who can provide dues information is in-person only one time per week."

Local 100 responded that members can pay back dues in person from 9 a.m. to 5 p.m. Monday through Friday and can mail the payment "if they need to."

Two sources confirmed that a Department of Labor official visited the union's Brooklyn headquarters recently to tell union members that they had to first pursue internal dispute-resolution options provided by the union, including appealing to the international.

Mr. Navarro, a former chairman of Local 100's Track Division, said the union should have long ago moved to electronic balloting and provided union members with a phone app that would permit them to quickly determine their status.

"There's absolutely no reason in the 21st century we can't be able to cast our votes from your phone and know if you are current on your dues," he said. "As far as vetting under our existing system, that should have started earlier, and people should be notified if they are in bad standing, especially considering we have been in a pandemic."

Car Inspector Joe Campbell, another former candidate for Local 100 president who is running for recording secretary on Mr. Navarro's slate, noted that electronic voting was being used by publicly traded corporations to elect their boards of directors and even some unions.

Oren Barzilay, the local's president, said the process was more convenient for members as well as more secure than the conventional paper ballot process. "They give you your pin number and you go online and vote," he said.

After that election, the Labor Department investigated a complaint by Mr. Thompson alleging that the union had suppressed voter turnout by using an out-of-date mailing list and then creating a cumbersome process for members to apply to get a replacement ballot in time to be counted, but determined that only one contest had to be re-run.

Mr. Utano at the time noted that the re-run involved "the 12th spot in a station-delegate race," one in which three candidates were separated by just two votes.