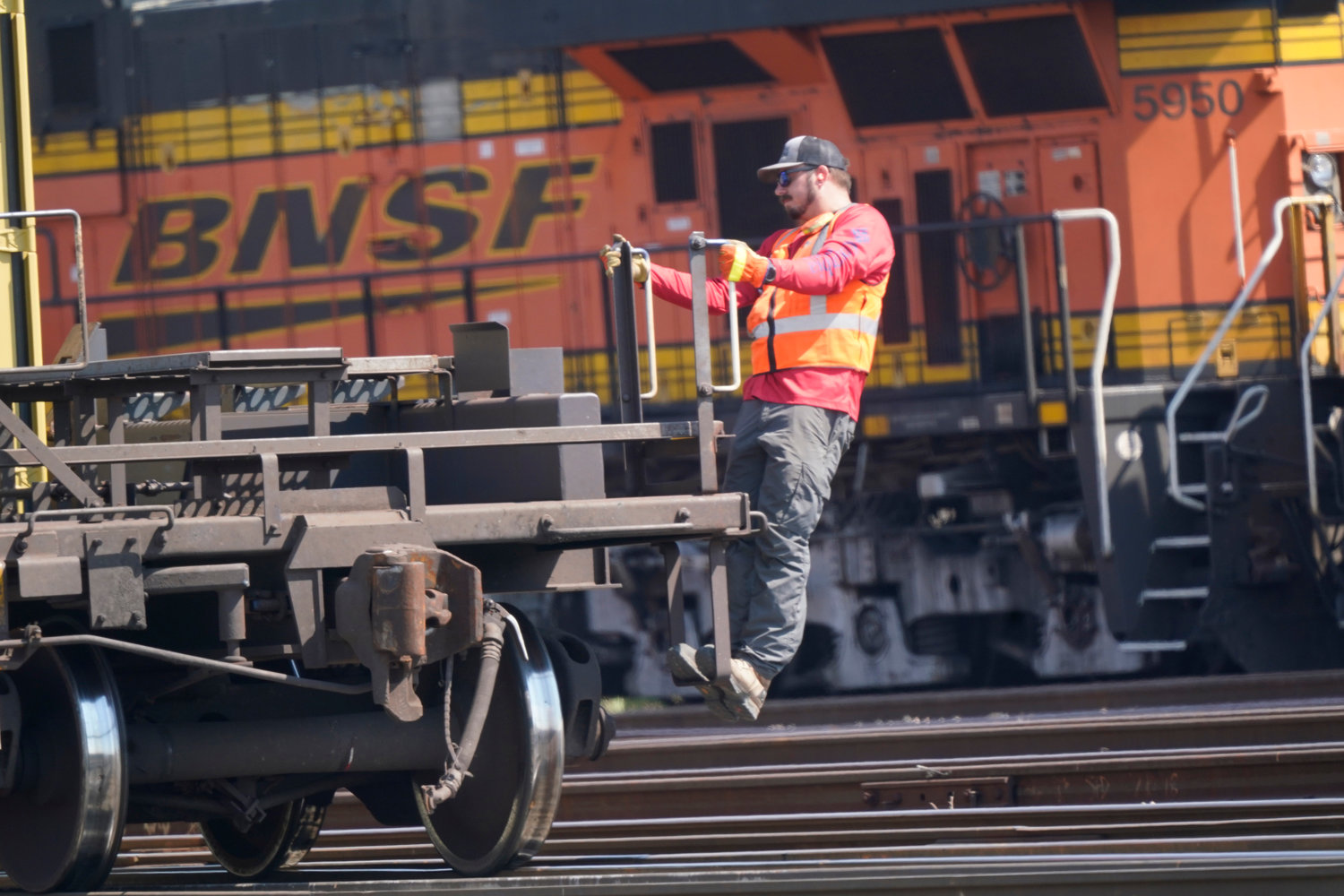 A worker rode a rail car at a BNSF rail crossing in Saginaw, Texas, in September. Most railroad workers weren't surprised that Congress intervened last week to block a railroad strike, but they were disappointed because they say the deals lawmakers imposed didn't do enough to address their quality of life concerns about demanding schedules and the lack of paid sick time.
LM Otero/AP Photo
Posted Friday, December 9, 2022 12:00 am
BY JOSH FUNK

When BNSF railroad conductor Justin Schaaf needed to take time off from work this summer, he had to make a choice: go to the dentist to get a cavity in his molar filled or attend a party for his son's 7th birthday.

He chose his son.

"Ultimately I decided to take the day off for my kid's birthday party," Schaaf said. "Then when I am finally able to get into the dentist four, five, six months later, the tooth is too bad to repair at that point, so I have to get the tooth pulled out."

Those are the kind of tradeoffs that railroad workers worry they might still have to make after Congress voted last week to impose a contract on them to avoid the economic disaster that would accompany a railroad strike. Workers and their unions say the deal didn't do enough to address their quality-of-life concerns and didn't add any sick days.

President Joe Biden signed a bill Dec. 2 to block a strike and force workers to accept the agreements union leaders made in September, even though four of the 12 unions — which include a majority of rail workers — voted to reject them. Business groups had been urging Biden to intervene for weeks.

For Schaaf, he's not sure if the new contract will make it any easier to find another day off sometime next year to pay to have a fake tooth implanted in his mouth.

"If I had the option of taking a sick day ... I would have never been in that situation," he said from his home in Glasgow, Montana.

Schaaf said it was discouraging, but not surprising, to see Congress step in to settle the contract dispute ahead of Friday's strike deadline. Lawmakers have made a habit of stepping in to impose contracts when railroads and their unions reach the brink of a strike — 18 times since the passage of the 1926 Railway Labor Act, by the U.S. Chamber of Commerce's count — because of the potential economic consequences.

Many businesses rely on railroads to deliver raw materials and ship their final products, so a rail strike would send a catastrophic ripple through the economy. Passenger railroads also would be disrupted because so many use tracks owned by the freight railroads.

The five-year deals that rail workers wound up with include 24% raises and $5,000 in bonuses. But concerns about the lack of paid sick time and the demanding schedules that unions say make it hard for workers to ever take a day off dominated the contract talks. The rail unions say they weren't able to get more concessions out of the railroads because the big companies knew Congress would intervene.

The railroads refused to add paid sick days to the deal at the end of three years of negotiations because they didn't want to pay much more than a special board of arbitrators appointed by Biden recommended this summer. Plus, the railroads say the unions have agreed over the years to forego paid sick leave in favor of higher wages and strong short-term disability benefits that kick in after as little as four days.

The railroads agreed to offer three unpaid days for engineers and conductors to tend to medical needs as long as they are scheduled at least 30 days in advance. They also promised to negotiate further to improve the way regular days off are scheduled to help workers better know when they will be off.

But to retired engineer Jeff Kurtz, there is still a lot of work to be done to restore the quality of life he enjoyed before he left the railroad eight years ago. He doubts rail workers today would be able to get time off for key family events on short notice the way he did when he found out his son was getting his doctorate right before Christmas in 2009.

"You hear when you hire out on the railroad you're going to miss some things. But you're not supposed to miss everything," said Kurtz, who remains active even in retirement with the Railroad Workers United coalition that includes workers from every union. "You shouldn't miss your kids growing up. You shouldn't miss the seminal moments in your family's life."

Over the past six years, the major railroads have eliminated nearly one-third of their jobs as they overhauled operations, making the work more demanding for those who remain.

The unions say they won't stop fighting for more paid sick leave, but now they may have to wait for negotiations on the next contract beginning in 2025.

The head of the Association of American Railroads trade group, Ian Jefferies, acknowledged "there is more to be done to further address our employees' work-life balance concerns" but he said the compromise deals that Congress voted to impose should help make schedules more predictable while delivering the biggest raises rail workers have seen in more than four decades.