Proposal would get app-based delivery workers $23.82 an hour 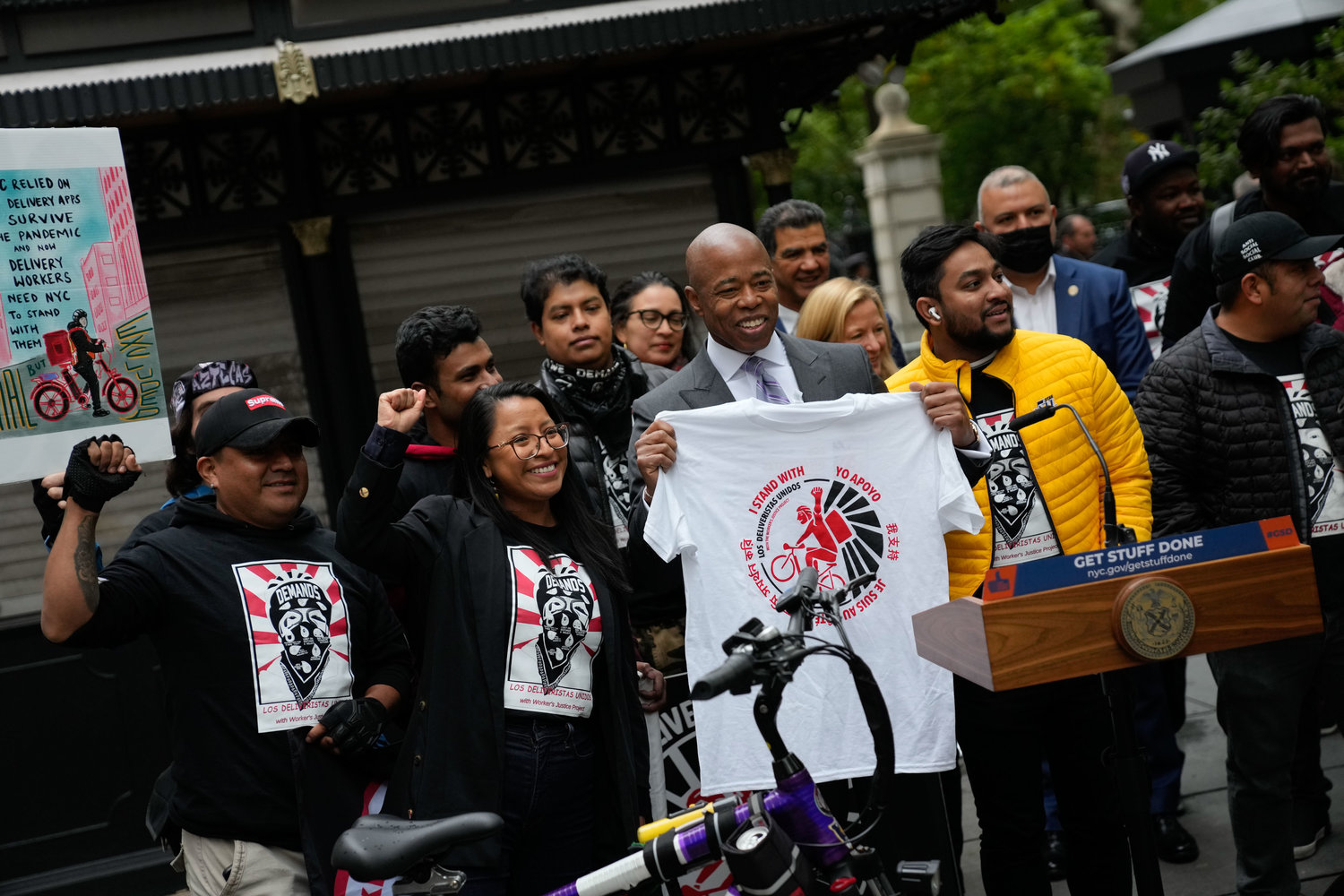 Mayor Eric Adams last month announced that the city would be facilitating the first-in-nation street hubs to serve food delivery workers. Last week, the city’s Department of Consumer and Worker Protection released a report proposing a $23.82 minimum hourly wage for the workers. They and their advocates, though, are calling for a $30 minimum wage.
Michael Appleton/Mayoral Photography Office
Posted Monday, November 21, 2022 6:52 pm
BY DUNCAN FREEMAN

App-based restaurant delivery workers would be guaranteed a $23.82 minimum wage, according to a proposal by the city’s Department of Consumer and Worker Protection, which last week released a long-awaited analysis of the working conditions, demographics and other aspects of a class of workers whose presence has increasingly become part of the city’s fabric.

DCWP’s proposed rate, if fully implemented, would consist of a $19.86 base rate, $2.26 to cover workers’ expenses and $1.70 to reflect the absence of workers’ compensation insurance, according to the department.

App-based delivery workers, through the Los Deliveristas Unidos organization, had called for DCWP to set the wage at $30 an hour. On Monday, LDU’s leaders, alongside several City Council members, responded to DCWP’s proposed wage at a press conference outside of City Hall.

“[DCWP’s] calculations are quite off,” Ligia Guallpa, executive director of Workers Justice Project, with which Los Deliveristas Unidos is affiliated, said at the press conference. “The $23 is not enough.”

Guallpa noted that DCWP’s figure includes nearly $4 of operating costs. “What that means for the deliveristas is that out of that proposed $23, $3.96 will not go directly to their pockets, it's to cover their basic expenses,” she said at the press conference.

DCWP’s report found that after expenses, including equipment and travel costs, app-based delivery workers take home around $4 an hour before tips.

‘We can do better’

DCWP also compiled data on injuries and fatalities, and found that there have been 33 delivery worker fatalities since 2020. Further, the department found that 33 percent of app-based delivery workers who use electric bikes or mopeds were physically assaulted on the job. The report also noted that 29 percent of workers riding e-bikes or mopeds have been seriously injured while working.

Guallpa cited these statistics, as well as the high operating costs for deliveristas who use motorbikes, to advocate that DCWP increase their wage proposal by 21 percent. “$5 more is the right step to ensure that deliveristas can not only continue to do this work, but can thrive in our city's economy,” she said.

“We’re here to say that we can do better. That New York City can deliver an actual living wage for deliveristas,” Guallpa continued.

As part of its report on app-based delivery workers, DCWP also looked at the demographics of deliveristas and found that 91 percent are non-white or Hispanic and 75 percent are male. DCWP also expects apps to pass on increased labor costs to consumers, leading to the cost of delivery to increase by $5.18 per order on average. The report’s authors also project that the number of app deliveries will increase by 35 percent by 2025.

“Restaurant delivery workers serve our city every day, in all weather conditions, only to earn less than minimum wage with no benefits,” said DCWP Commissioner Vilda Vera Mayuga. “This proposed minimum pay rate would help guarantee delivery workers a more dignified pay and rightfully establish pay equity with other workers who earn a minimum wage.”

DCWP is accepting public comments from New Yorkers on the minimum wage rules and will be hosting a public hearing on the proposal on Friday, Dec. 16, at 11 a.m.

Los Deliveristas Unidos intends to continue advocating for DCWP to rethink their proposal and leadership said, despite not being able to directly negotiate with DCWP or the app-based companies, that they intend to turn out in large numbers for the mid-December hearing.