Nurses call on BronxCare and St. Joseph's to bargain in good faith

Staffing is an overriding issue 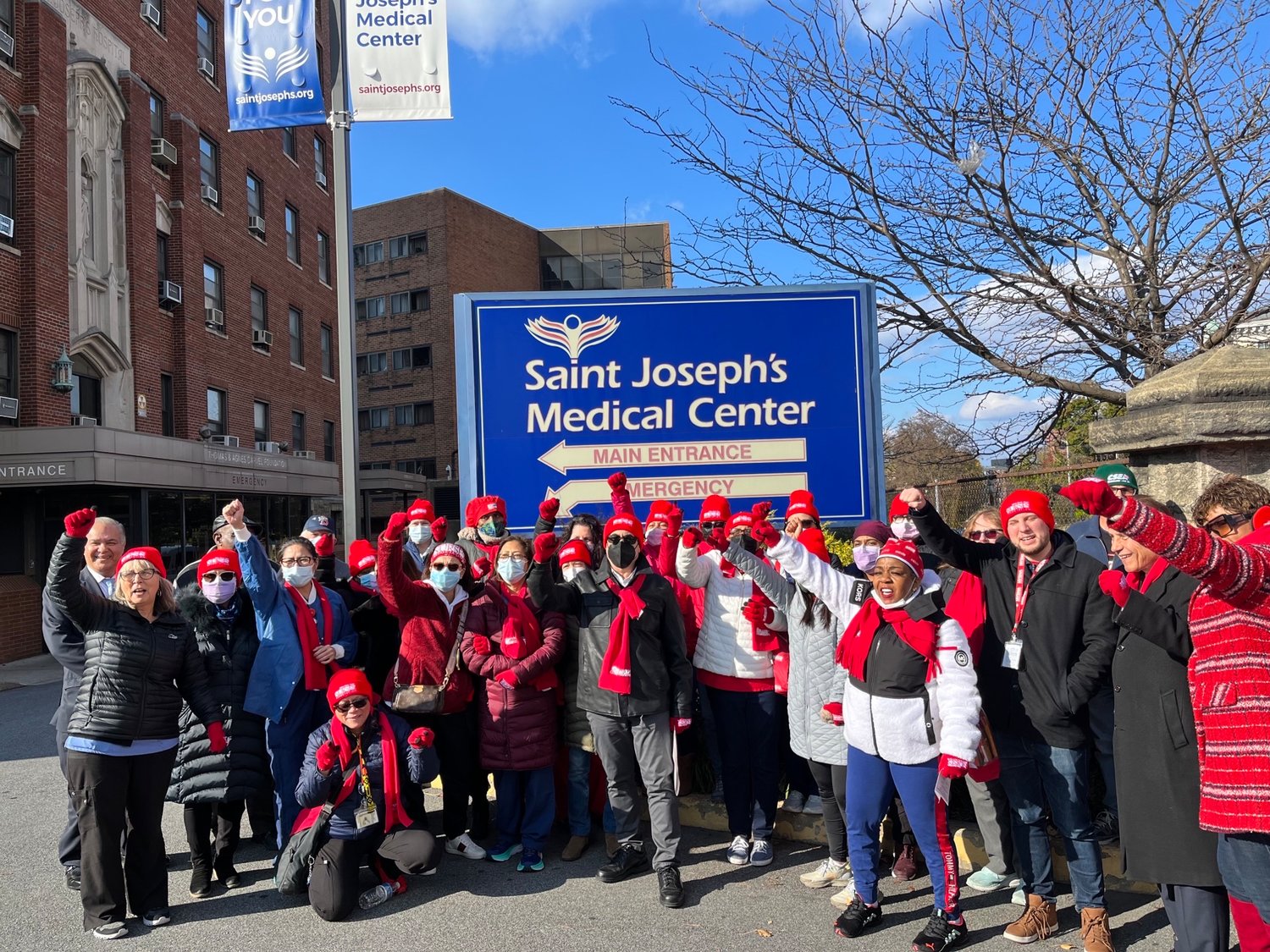 Nurses at St. Joseph's Medical Center have been bargaining for a new contract for three years and rallied Nov. 18 for safe-staffing, particularly in the emergency and ICU units. Nurses at the BronxCare Hospital Center at a rally held a day earlier also called for a contract that includes a plan to retain staff.
Courtesy of NYSNA
Posted Monday, November 21, 2022 9:59 pm
BY CRYSTAL LEWIS

Nurses rallied last week at hospitals in the Bronx and in Yonkers to demand fair contracts and improved staffing ratios.

Health care workers gathered outside of St. Joseph’s Medical Center in Yonkers Nov. 18 to urge the hospital’s management to finally reach a contract agreement with the New York Nurses Association after three years of negotiations.

“We want to stay and work at St. Joseph’s. We feel that the hospital is not willing to give in to give us the safe-staffing to do the job, or the proper incentives to keep the nurses at the hospital to deliver the best care to the community,” said Hasan Hamam, NYSNA’s local president at the facility.

Staffers said that hospital management has refused to abide by contractual safe-staffing ratios in the intensive care, emergency and psychiatric units. They also said that the hospital has refused to increase the number of full-time nurses in the emergency unit, instead relying on temporary agency nurses. St. Joseph's did not return a request for comment.

“We don’t even have 14 full-timers to run the ER in 24 hours, they’re supplementing it with agency nurses. Up to September they’ve already paid $1 million to supplement it, and that’s not fair,” Hamam explained.

Instead of boosting staffing, hospital management is planning to reduce the number of nurses in the psychiatric unit, nurses noted.

“We know New York is in a mental-health crisis. How can you expect things to get better when you slash staffing in a mental health crisis?” said Mike Hertz, NYSNA’s nursing representative.

“Every hospital must abide by fair negotiations and must work closely because all individuals, from the CEOs, to the nurses, to the other staff, [they] are all part of the health care network,” Sayegh said.

NYSNA nurses at the BronxCare Hospital Center spoke of similar challenges at a rally held one day earlier. The nurses’ contract is set to expire at the end of this year, and safe-staffing is one of the main issues the workers want addressed. But management has canceled all of the upcoming bargaining sessions between the hospital and the union, said Joanne Popotte-Smith, the NYSNA chair at BronxCare.

“We are working so short-staffed, we leave here worried for our patients.… Administration doesn’t seem to care,” she said. “This hospital cannot survive and provide the quality care for our community if we lose more staff. We need a fair contract with a real plan to hire, retain and respect the people who work for the health care of this community.”

BronxCare did not return a request for comment as of press time.

The nurses also spoke out against a proposal by the hospital to reduce their health-care benefits. Officials including Senator Robert Jackson and Assembly Member Kenny Burgos backed the Bronx nurses at the Nov. 17 rally.

Tammy Steele, who has worked as an ICU nurse at BronxCare for more than two decades, said the hospital’s nurses have felt like they’ve been left high and dry since the start of the pandemic.

NYSNA has long advocated for safe-staffing at hospitals across the state. The union launched a large contract campaign this past August on behalf of 30,000 private and public-sector nurses across the state whose collective-bargaining agreements set to expire in the coming months.