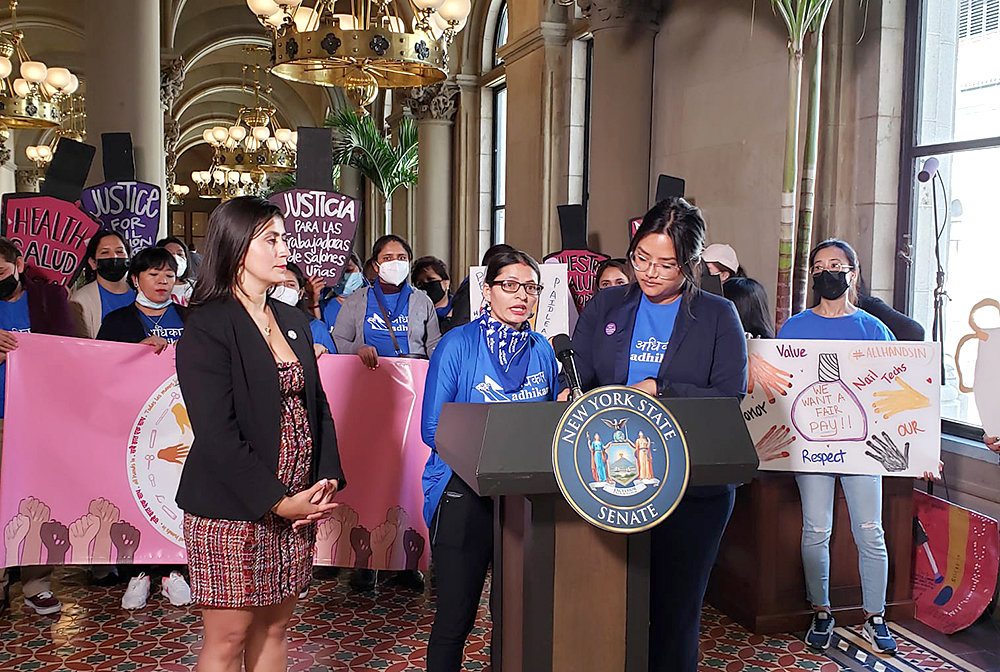 Nail technician Menuka Simkhada, left at mic, spoke of the low pay most nail salon workers receive at a May 24 press conference in Albany. Nail salon workers are backing a proposed bill, sponsored by State Senator Jessica Ramos, at left, that would establish a council to recommend a minimum wage and safety standards for the industry.
NY Healthy Nail Salons Coalition via Twitter
Posted Friday, May 27, 2022 12:00 am
BY CRYSTAL LEWIS

Menuka Simkhada, a Nepali nail technician who has worked on the job for six years, is struggling to raise two children on an hourly salary that is below the city’s minimum wage.

Nail salon workers rallied to urge legislators to pass the Nail Salon Minimum Standards Council Act. If enacted, the bill, sponsored by Senator Jessica Ramos, would establish a council made up of nail salon workers and employers and public officials who would recommend minimum wages and safety standards for the industry.

Ramos said the panel would “create a space where government plays a role in mediating these conversations, to ensure that these workers are being paid living wages and are being provided safe working conditions in a way that doesn’t hurt our small businesses.”

Nearly 90 percent of nail salon workers are foreign-born, and 84 percent are women. Low pay is rampant throughout the industry: about half of Spanish-, Nepali- and Mandarin-speaking nail technicians in the state reported earning below minimum wage, according to a report by Cornell University’s School or Industrial and Labor Studies.

Many were also susceptible to wage theft because they were misclassified as independent contractors, which allows businesses to circumvent minimum wage, overtime and workers’ compensation laws. The New York Nail Salon Workers Association estimated that 46 percent of workers in the industry were wrongly considered independent contractors.

“This is part of a long, unfortunate tradition in our society to feminize poverty,” Ramos said. “Whether you clean houses for a living, whether you’re a child-care provider or a nail-salon worker, more often than not you’re a woman worker, and there is no way that we can allow in New York State that women’s work won’t be valued and won’t be paid a living wage.”

Then there are the health risks. Many nail salon workers experience frequent headaches, respiratory irritation and allergies, according to studies. Toxic chemicals including formaldehyde and toluene are commonly used in nail products and have been linked to serious long-term health effects such as cognitive development issues, cancer and reproductive harm.

Although the state passed a law in 2016 requiring nail salons to install adequate ventilation systems, businesses were not required to comply with the mandate until 2021. But Governor Kathy Hochul has delayed compliance until October of this year, citing economic concerns caused by the pandemic.

Advocate groups including the New York Committee for Occupational Safety and Health and Adhikaar also came out to support the nail salon workers, who campaigned under the slogan "All Hands In." Assembly Members Jessica González-Rojas and Harry Bronson also backed the bill.

“I know that I see an industry where wages are low, where there’s wage theft, where there’s a race to the bottom by businesses — I know we have to do something. That something is this bill,” Bronson said.