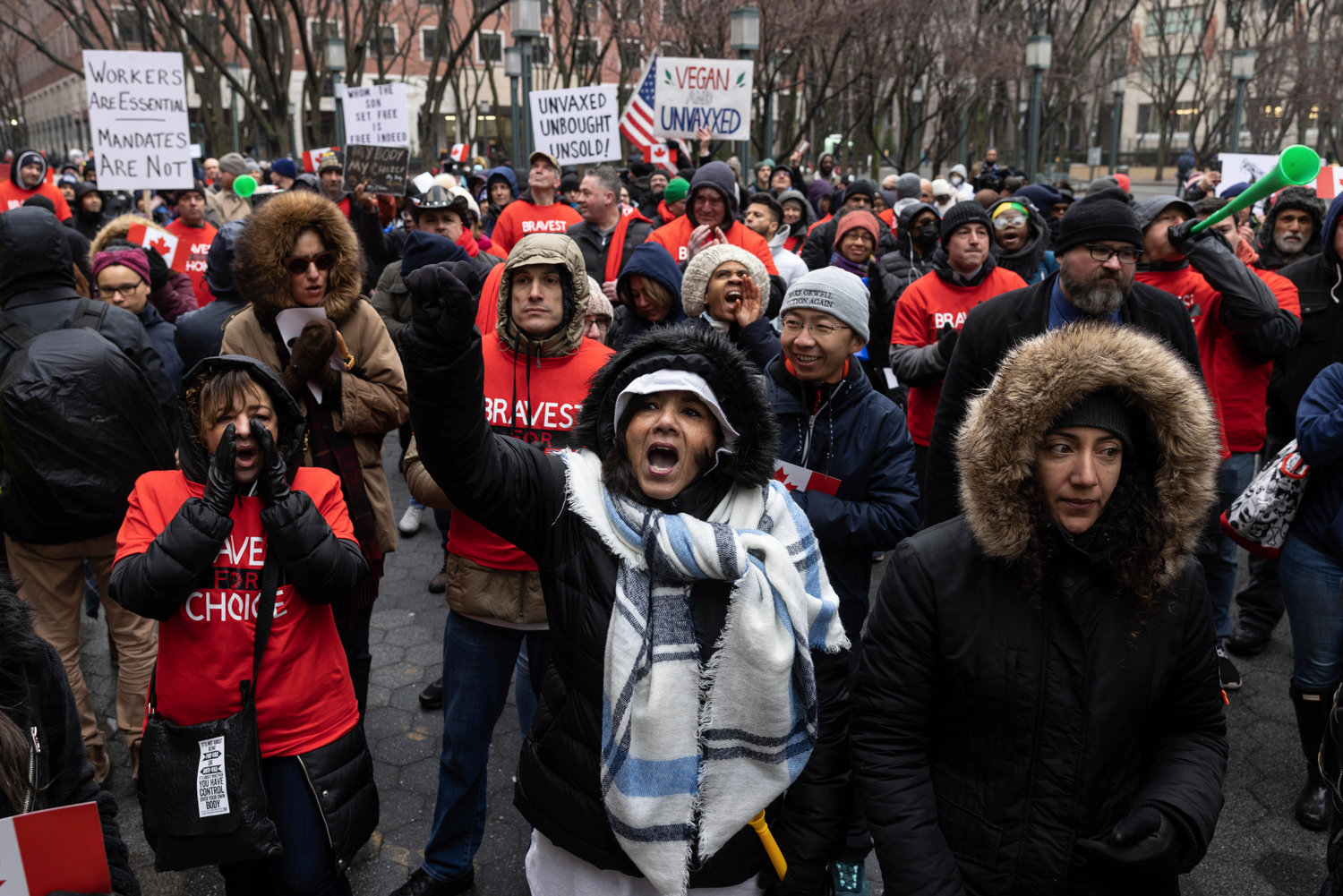 Public workers rallied against Covid vaccine mandates in downtown Brooklyn, days before more than 1,300 unvaccinated city employees were terminated in February 2022. Last week, 72 former employees filed a lawsuit alleging that the mandate was 'arbitrary' and that they were improperly terminated because the city failed to engage in cooperative dialogue in regards to their requests for medical or religious exemptions.
Yuki Iwamura/AP Photo
Posted Friday, January 27, 2023 12:00 am
BY CRYSTAL LEWIS

City employees who were terminated for refusing to get the Covid vaccine have filed a $250 million lawsuit seeking an end to the public-sector vaccine mandate as well as to be reinstated to their jobs.

The majority of the 72 terminated employees named in the suit are former municipal workers, many of whom worked at the Department of Education, the FDNY and the Department of Sanitation for a decade or longer. A few others worked at private-sector companies such as ShopRite and Maimonides Medical Center.

The lawsuit, filed Jan. 19 in Bronx Supreme Court, noted that similar Covid vaccine requirements have since been rescinded, including the city’s mandate for private-sector employees, which the Adams administration ended last September. It called the continued enforcement of the city’s vaccine mandate for public workers — enacted in fall 2021 under former Mayor Bill de Blasio — an “abuse of discretion.”

The former city employees noted that it made no sense for the mandate to continue since President Joe Biden and other elected officials have stated that the Covid pandemic is “over.” The suit also pointed to the Jan. 13 decision by Bronx Supreme Court Justice Gerard Neri overturning the state’s Covid vaccine mandate for health care workers, in which Neri ruled that Governor Kathy Hochul and the state Department of Health overstepped their authority by implementing the policy.

In another blow to the mandate, Staten Island Supreme Court Justice Ralph Porzio in October ruled that 16 city sanitation workers were wrongfully terminated for refusing the vaccine. (The city’s appeal of Porzio's decision leaves the mandate in effect for the time being.)

Attorney James Mermigis, who is representing the city employees, highlighted a statement made in 2021 by U.S. Centers for Disease Control and Prevention Director Rochelle Walensky that although Covid vaccines worked well to prevent severe illness “what they can't do anymore is prevent transmission.”

“The city feared these [unvaccinated] workers would transmit the virus. But the data shows these employees were wrongfully terminated,” Mermigis said during a phone interview.

A spokesperson for the city Law Department stated that “we’ll review the case once served.”

The suit argues that the city was “also clearly prohibited from mandating any vaccination outside of those specifically authorized by the legislature. The city mandate is beyond the scope of the respondents and should be null, void and of no effect.”

It also challenges the city’s refusal to acknowledge natural immunity reached by those who have contracted and recovered from the virus as satisfying the mandate’s immunization requirement.

Although the city’s human rights law requires the city to provide reasonable accommodations for workers seeking religious or medical exemptions, the fired workers allege that they were “callously terminated without being engaged in any cooperative dialogue or having discussions of accommodations for their sincerely held religious beliefs.” The suit claims that the employees’ religious beliefs have been “mocked and ridiculed.”

Out of the more than 12,000 city employees who applied for exemptions, more than 9,000 were denied, according to the city.

The City Council’s Common Sense Caucus has called for the fired workers to be reinstated. As of Nov. 8, more than 1,700 city employees had been terminated for refusing to get the shot, according to City Hall. About 1,400 employees were fired last February, with hundreds more fired over the following months.

“These workers have mortgages; they have children,” Mermigis said.

The suit also claimed that the mandate “has had crippling economic and other consequences for the city employees and all persons in New York City, who are now made substantially less safe by the staffing crisis.”

Currently, the number of vacancies in the city’s workforce is 23,000 — well over 10 times the number of employees fired due to the mandate.