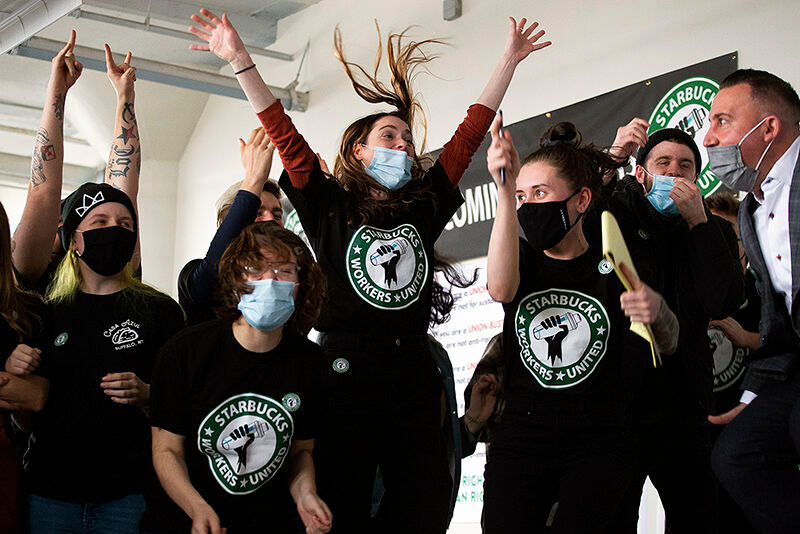 NOW SERVING UNION COFFEE: Staffers at a Buffalo Starbucks on Elmwood Ave. became the first in the chain's 50-year history to join a union by a 19-8 count. The workers celebrated the monumental vote, which was tallied Dec. 9.

Workers at the Elmwood Ave. Starbucks in Buffalo won a grande-sized victory Dec. 9 by becoming the first branch of the coffee chain to be unionized.

In a vote of 19-8, employees at the Buffalo cafe voted to join Workers United, an affiliate of the Service Employees International Union. Staffers fought numerous attempts by the chain to block the vote.

'Let's Get to Bargaining'

“It’s been 102 days since we filed our petition for unionization. We all know that [there] has been an extensive anti-union campaign by Starbucks to stop this...and yet we have prevailed,” Michelle Eisen, who has been working as a barista for 11 years, said during a press conference after the historic vote. “Let's get to the bargaining table as soon as possible and get the best contract the service industry has ever seen.”

The mail-in ballots were tallied by Thomas Miller, a National Labor Relations Board field examiner.

If the labor board certifies the vote, which is expected to take about a week, the location will become the first of nearly 9,000 Starbucks stores to have union representation.

But a legal battle over two other cafes that voted is brewing. Employees at a second Starbucks in Buffalo on Camp Rd. voted 12-8 against unionizing. However, Ian Hayes, a lawyer for the union, noted that three ballots that were dropped off at an NLRB office were not among those counted, and two others were contested.

“We are confident that without Starbucks’ anti-union campaign, we would have also won at Camp Rd.,” said Gianna Reeve, a shift supervisor at Camp Rd. “Yet seeing the other stores unionize gives us hope to see what a true partnership can look like at Starbucks. It changes the game.”

The outcome of the vote at a third store—the chain’s Genesee St. location–has not yet been determined: while 15 employees voted in favor of the union and eight were against it, seven other ballots were challenged.

Although two of the contests did not produce immediate victories, in order to be victorious “all we had to do was win one,” noted Jazz Brissack.

Alexis Rizzo, a shift supervisor at the Genesee St. Starbucks who has worked with the company since she was 17, called the vote “a dream come true.”

'Do the Right Thing'

The staffers, who were known as Starbucks Workers United, called on the company to sign the “Starbucks Agreement for Equity & Sustainability,” which calls on the company to recognize the union, to bargain in good faith without delay and to stop union-busting.

“I am confident that Starbucks will do the right thing and negotiate a contract that works for both the company and for us—the partners,” said Cortlin Harrison, a barista at the Elmwood store.

“This campaign was driven by the partners and they deserve all the credit for their courage, and determination to fight for the collective interest of their colleagues,” she said.

SEIU International President Mary Kay Henry noted that "far too often workers lose union elections because the rules are rigged against them—which is why it’s not enough to celebrate today’s victory. We need to rewrite the rules to make it easier for every worker to join a union."

The workers have faced several challenges since they filed a petition to unionize in August, including a request made by Starbucks to the NLRB to hold one vote for all of its stores in the Buffalo area, which the labor board rejected. Two days before the count, Starbucks unsuccessfully attempted to impound the ballots.

The organizing efforts received national attention, including from Sen. Bernie Sanders, who called on the company to “stop pouring money into the fight against the union.”

Governor Hochul congratulated the workers, noting that "unions are the backbones of our state and a ladder to the middle class."

Congressman Brian Higgins, who represents Buffalo, stated that "every social justice movement has started from the ground up, from a handful of people who stepped forward to demand change. It took incredible courage for Western New York Starbucks workers to speak out, forge ahead with organizing amid enormous corporate pressures, and fight to be heard."

Rossann Williams, Executive Vice President and President of Starbucks North America, said in a statement that “we are grateful for each partner who exercised their right to vote, and as we move forward, we will continue to focus on working to exceed the expectations of all our partners and our customers...Independent of the outcome of these elections, we respect the process, and we will continue to stay true to our mission and values.”

Turning Into a Habit?

Unlike pumpkin spice lattes, the organizing efforts at the famous coffee chain likely won't be a seasonal trend–three other Starbucks locations in Buffalo and one in Arizona have also filed petitions to unionize.

“I think that this has larger implications for the labor movement as a whole. I don't think it will stop just in Buffalo,” Ms. Rizzo said.