All in: Union authorizes Atlantic City casino strike next month 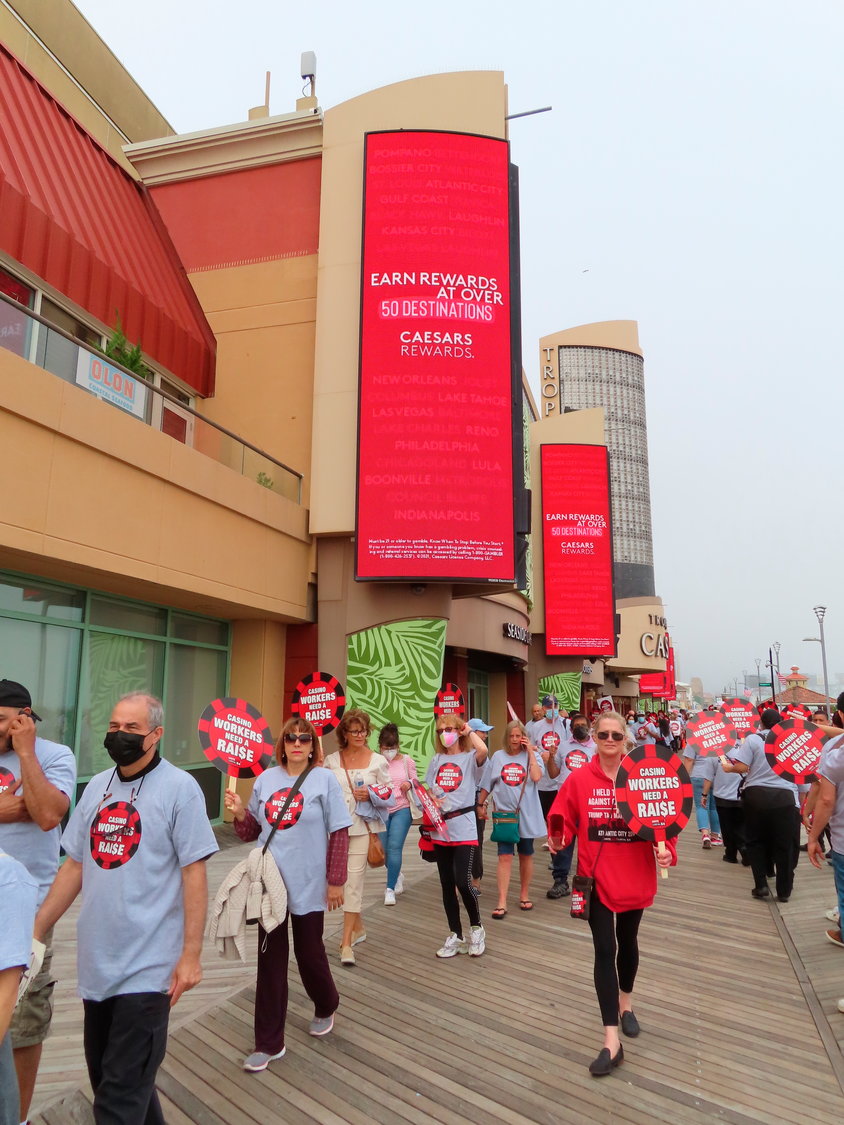 Atlantic City casino workers on Wednesday authorized their leaders to call a strike against the gambling houses if new contracts are not reached by the beginning of July.
Members of Local 54 of the Unite Here union authorized their negotiating committee to call a July 1 strike against the Borgata and the three casinos owned by Caesars Entertainment — Caesars, Harrah's and Tropicana — and a July 3 strike against Hard Rock if new deals are not in place by then.
Union president Bob McDevitt said 96 percent of the "several thousand" union members who cast ballots did so in favor of authorizing a strike.
"The industry better not take this lightly," he told a cheering ballroom of union members after the vote. "This is a no (B.S.) thing."
Contracts expired over two weeks ago and talks have yet to reach a new deal.
The "yes" vote will not result in an immediate strike. It simply gives the union's negotiating committee, comprised of workers from all nine casinos, the power to call a strike.
Spokespeople for Caesars Entertainment and Hard Rock declined comment, while executives from other casinos did not immediately respond to requests for comment.
McDevitt said the union has so-called "me-too" agreements with Bally's and the Ocean Casino Resort specifying that they will honor the terms of contracts reached with the city's larger properties. That effectively guarantees those two casinos will not be struck, he said.
"Bally's and Ocean are in the green zone, Resorts and Golden Nugget are in the yellow zone and the rest are in the red zone," he said.
Union members said they are ready to walk out if the call comes.
"We are fighting for economics across the board, for all job classifications," said Ruth Ann Joyce, a bartender at the Harrah's and Hard Rock casinos, and a veteran of Atlantic City labor wars. She worked at the Showboat when it closed in 2014, one of four casinos to go belly-up that year.
The union says it is seeking "significant" wage increases in the next contract to help workers deal with financial setbacks caused by the coronavirus pandemic and rapidly rising prices.
"Historically our fights in general have dealt with health care," Joyce said. "This go-round, it's about economics. We can't find workers because there's no money, and it's hard to hold onto the workers we do have because they can go somewhere else and make more."
Rodney Mills, a housekeeper at Tropicana, said he is ready to strike if need be.
"Things are really hard right now," he said after casting his ballot at the Atlantic City Convention Center. "We need a livable wage to survive."
The labor dispute comes at an uncertain time in Atlantic City: The casinos and their online partners are collectively making more money now than before the pandemic hit.
But the casinos say those statistics are misleading because they get to keep only about 30 percent of online and sports betting money, with the rest going to their third-party partners. They say that in-person revenue won from gamblers is the crucial metric, and not all the casinos have surpassed their pre-pandemic levels.
The union went on strike in 2004 for 34 days, and walked out against the former Trump Taj Mahal casino in July 2016, which ended with the casino shutting down in October of that year. It has since reopened under different ownership as the Hard Rock.